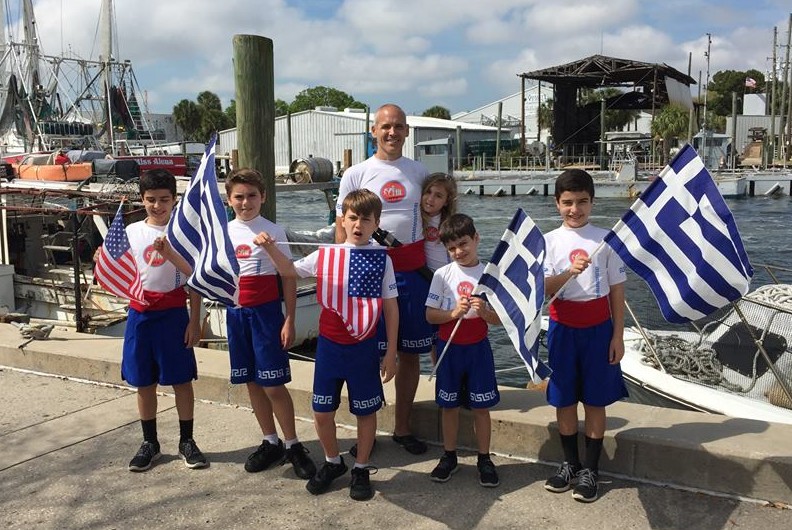 The Hellenic Pammachon Alliance non-profit (www.hellenicpa.org) and the Ακαδημία Ακριτών (hq.akritesacademy.com ) in Orlando, FL both marched in the 2016 Greek Independence Day Parade in Tarpon Springs, FL where we were able to present “Pammachon:19th Century Tradition of Hellas and Ancestral Lands”:

The historical significance becomes clear in a series of historical photos to the present day within the 1st few seconds of the video.

One should note that of the 5 boys in the video, 2 have been training for a year and a half and the other 3 for under a year.

If the reader is an organizer of a Hellenic regional syllago, Hellenic Orthodox church, Hellenic charter school, etc, contact us ( [email protected], [email protected] ) regarding a Pammachon youth module to be made available to you via the non-profit. You must have female or male adults (preferably Hellenic dancers) that are interested in undergoing a certification to teach youth and continue carrying this legacy into the future.  Adults are not allowed to pursue the “adult track” of training until they have been certified to teach youth and have begun doing so. When adults are committed to teaching youth, traditions are ensured to be passed on into the future; as with any other Hellenic tradition.

Kostas Dervenis, the headmaster who resides in Hellas (Greece), has been involved with building modules based on the levels of Pammachon development for the NMIOTC in Crete under sponsorship of the Hellenic Navy and has received awards for such training from NATO, the Hellenic military and the Hellenic airforce.

Here is an article from the Fall 2014 edition of the NMIOTC journal  that outlines aspects of such a module.

The Διεθνή Ένωση Παμμάχου in Greece will be conducting the 2016 Pammachon Summer Camp in Papingo, Hellas in July.   It is our hope to use this tradition  (much like the Japanese used Judo after WWII and the Koreans created Tae Kwon Do after the Korean War) to serve as a catalyst to recovery of Hellas. The camp itself will serve Hellas as a method of tightening relationships with the Hellenic Diaspora communities as well as, longer term, cultural diplomacy to citizens of other nations.  The intention is to move forward with the camp annually and that Papingo become a center of learning.  The mini-Camp conducted in the wake of the “Default” in summer 2015 can be viewed here: