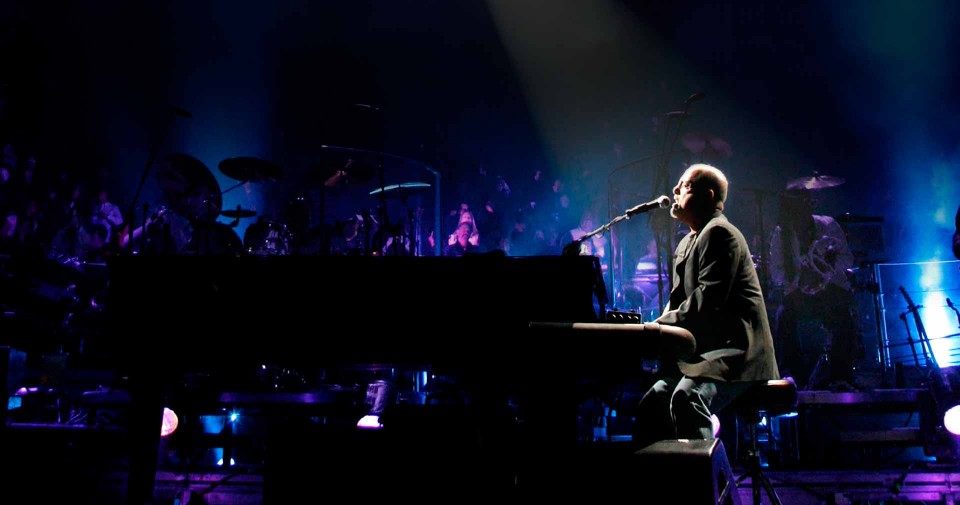 As Joel took the stage, he was greeted with a lengthy standing ovation from the Madison Square Garden audience, and he opened his show with “Miami 2017 (Seen the Lights Go Out on Broadway).”

After a sip of water, he immediately broke into “Pressure,” as the stage was graced in purple lights. “Good evening,” Joel said, as he noted that this was his 70th career show at Madison Square Garden, as part of his residency. “Our last show was No. 69, and I could have had fun with that number,” he added, humorously, prior to wishing his fans “Happy Holidays.”

He continued with “She’s Right on Time” and went on to dedicate “The Entertainer” to Donald Trump. He took his fans on a trip down memory lane to 1977 when he sang “Just The Way You Are” in honor of Frank Sinatra’s 100th birthday.

Joel polled the audience, asking them which song they would like to hear next and “Zanzibar” won by a landslide over “Big Man on Mulberry Street.” “That was easy,” he said, regarding their selection.

He went on to put his fans in the holiday spirit by singing “Have Yourself a Merry Little Christmas,” and he subsequently put them in a “New York State of Mind,” as a televised video of skyscrapers displayed on the giant televised screens. Joel wore sunglasses for the latter tune.

Joel went on to sing a verse of Sinatra’s “I’ve Got You Under My Skin.” In yet another audience poll, “Say Goodbye to Hollywood” won over “All for Leyna” and it was an infectious performance.

He had his fans clapping along to the mid-tempo “Keeping the Faith,” which had a youthful vibe to it, as yellow lights dimmed on the stage.

It was followed by “Don’t Ask Me Why” and yet another holiday tune, a piano-driven version of Gene Autry’s “Rudolph the Red-Nosed Reindeer,” as he paid homage to his favorite “Singing Cowboy.”

His rendition of “She’s Always a Woman” was controlled and nostalgic, thus garnering him a standing ovation and it was followed by an instrumental version of “O Come All Ye Faithful,” where the New York audience was singing along to this Christmas classic.

He picked up the pace with “Movin’ Out” and went on to perform a piano-driven medley of “Little Drummer Boy” and “Jingle Bells.”

After “The River of Dreams,” he went on to sing the upbeat “Jingle Bell Rock,” prior to performing his powerhouse song “Scenes From an Italian Restaurant,” where his piano-playing was absolutely hypnotic, thus earning his another lengthy standing ovation. Joel closed with his signature song “Piano Man,” where he noted that it was a “pretty good crowd for a Thursday.” He returned for an encore which included a stunning version of “We Didn’t Start the Fire,” the upbeat “Uptown Girl” and “It’s Still Rock and Roll to Me.”

Overall, Billy Joel proved to be one very charismatic performer and entertainer at New York’s Madison Square Garden. His eight-piece band consisted of extremely talented musicians as well and they helped put on this excellent live show. He showcased his tremendous personality and interacted well with his fans throughout the evening. The New York crowd knew that they were in the presence of a living musical legend. His concert earned 5 out of 5 stars.

Previous articleGreece Struggles To Right Economy As Refugee Influx Adds to Woes
Next articleReview: ‘The Supernaturalists’ with Criss Angel phenomenal at Foxwoods