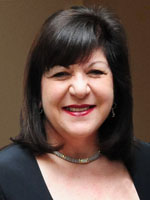 This is the second year Friends of Cancer Research has awarded the Ellen V. Sigal Advocacy Leadership Award, named for the chairperson and founder of Friends to celebrate her lifelong commitment to science, research, and patient advocacy. The first Ellen V. Sigal Advocacy Leadership Award was given to Sherry Lansing, chief executive officer of The Sherry Lansing Foundation, co-founder of Stand Up To Cancer, and former president of Paramount Pictures in Los Angeles.

“Friends of Cancer Research is truly honored to recognize Margaret Foti as the second recipient of the Sigal Advocacy Leadership Award,” said Ellen Sigal, PhD, chairperson and founder of Friends. “Her dedication to cancer research, trailblazing work as CEO of the AACR, and steadfast advocacy for science and patients is unparalleled and invaluable to all in the community.”

The award honors advocates who have made unprecedented contributions to the cancer research community. Foti serves as chief executive officer of the AACR, the world’s first and largest professional organization dedicated to advancing cancer research. During her long tenure, AACR membership has grown from 3,000 to more than 35,000 laboratory, translational, clinical, and population scientists; other health care professionals; and cancer advocates residing in 97 countries. Under Foti’s leadership, the organization’s scientific meetings, peer-reviewed journals, and science and public policy work have flourished, furthering progress against cancer through research, education, communication, and collaboration.

“Ellen Sigal is a true visionary, an advocate, a collaborator, and a dear friend. She has made an enormous impact by fostering groundbreaking partnerships in the cancer field to discuss national policies and solutions that will accelerate the development of effective treatments for patients,” Foti said. “I am deeply honored to receive this award bearing her name.

“I am immensely proud of AACR’s accomplishments in the battle against cancer over the years, but there is much more work to be done,” she continued. “We will continue to provide support and opportunities for professional development to basic researchers and physician-scientists at all stages of their careers, so that they can continue to make the advances that lead to more cures. And we will continue to advocate strongly for increased federal funding for cancer research and biomedical sciences, which must be a national priority if we are to improve public health, spur more progress, inspire more hope, and save more lives.”

During Foti’s tenure, the AACR has become an outspoken proponent of policies that support all aspects of cancer research and prevention. The organization engages with policymakers through its Science Policy and Government Affairs Committee and Washington, D.C. office, which opened in 2007 to amplify the voice of cancer researchers, patients, survivors, and caregivers on Capitol Hill. The AACR’s commitment to advocacy was evident in April 2013, when under Foti’s direction, the organization spearheaded a Rally for Medical Research in downtown Washington, D.C. That event brought more than 200 organizations and 10,000 people to the streets to call for increased investment in the National Institutes of Health. The momentum from that day has continued in the form of a Rally for Medical Research Hill Day held last week with nearly 300 supporting organizations and also in September 2013.

In addition to her leadership at the AACR, Foti has been elected president of three professional societies in scholarly publishing and cancer research. She has also served as a board member, committee member, and consultant to a number of other nonprofit, scientific, and cancer-related organizations, and is a founding board member and member of the Executive Committee of Friends. Foti has received numerous accolades for her leadership, including honorary degrees in medicine and surgery from three universities in Italy and Spain and, most recently, the 2014 Morton M. Kligerman Visiting Professorship Award from the University of Pennsylvania.