Archimedes’ Mirrors in the Mojave Desert 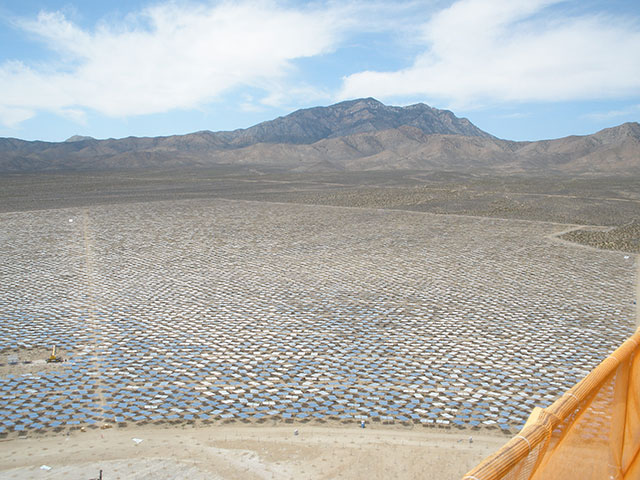 In June 2016, I visited the world’s largest solar thermal facility, 392 megawatts of power, in the Ivanpah Dry Lake of the Mojave Desert of California.

I arrived at the plant around noon. The sun was hot, the desert merciless. Except this desert, about 3,500 acres of public land, wore glass, the white glass of some 340,000 large mirrors. Every two mirrors work together as a heliostat or solar station. The heliostats hold the mirrors about a meter above ground. Control of the mirrors is through the heliostats.

I tried to see the immense shimmering lake of mirrors in front of me. It was difficult. Being so close to so many mirrors was also shocking. In fact, I thought I was dreaming.

Even more unsettling were three gigantic towers: monsters of weaved metal, machines, boilers and computer software. Each tower carries a 2,200-ton boiler on its top.

That top is the burning brain of the towers. Each tower is 450 feet tall. It is in charge of a third of the mirrors feeding its head enormous amounts of solar energy. As a result, the tops of the towers glow like exploding bombs. They appeared to me like the glowing eye of the giant Cyclops Polyphemos. I had never seen such a bright white luminescence before.

The science of using mirrors for war and peace is ancient, sophisticated and Greek. In fact, the moment I saw the mirrors reflecting bright sunrays, I thought of Homer and Archimedes.

In the opening lines of the fifth book of Homer’s Iliad, we read of the Greek hero Diomedes entering battle under the inspiration of goddess Athena. Diomedes is armed with light, shining like the greatest of the stars, Sirius. His helmet, shield and body become mirrors reflecting the bright starlight of Sirius.

Archimedes was the greatest mathematician and engineer of ancient Greece. From 215 to 212 BCE, he defended his country, Syracuse of Sicily, from Roman invaders.

Among a variety of weapons, Archimedes used his burning mirrors against the Roman ships and turned them to ashes.

Diodoros of Sicily, a Greek historian writing in the first century BCE, more than a century after the Romans assassinated Archimedes in 212 BCE, reports Archimedes used mirrors and burned the Roman ships at an approximate distance of a bow’s flight.

The great physician Galen and the illustrious satirist Lucian of the second century of our time, and numerous other Greek intellectuals down to the 12th century reported that Archimedes defended Syracuse with his burning mirrors.

Despite the reluctance of modern researchers to credit Archimedes for his solar weapon, Archimedes had broken ground in the geometry of conic sections, which led him to his burning mirrors. Indeed, Archimedes had written an entire book, now lost, on “Catoptrics,” or the science of mirrors reflecting light.

I kept thinking of the golden age of Greek science when Archimedes was one of its founders. Imagine if that Greek experiment in the invention of modern-like science and technology in Alexandria had run its course.

At the same time, I felt tremendous satisfaction that ancient Greek technology had triggered modern technology. And as the mirrors in front of me demonstrated, Archimedes-inspired technology was put to good use in producing electricity and eliminating about 400,000 tons of carbon dioxide per year from warming the planet.

Archimedes’ technology of reflecting sunlight from flat, circular, elliptic and parabolic surfaces has brought us more than burning and solar mirrors. Assunta Bonanno, Michele Camarca, Peppino Sapia and Annarosa Serpe, physicists and mathematicians at the University of Calabria, Italy, suggested in 2010 that Archimedes’ study of conic sections has become the model for designing radio telescopes, reflecting optical telescopes, car headlight reflectors and the parabolic antennas of microwave telecommunications.

Thinking of Archimedes’ great contributions to our culture helped me see the mirrors of the Mojave solar-thermal plant in its historical context. The Ivanpah facility owned its existence to Archimedes and global warming.

Solar power is unlimited and leaves no pollution trails. So the Obama administration funded the Mojave Desert solar plant. The Department of Energy contributed $1.6 billion of the total $2.2 billion costs of the project. The rest of the money came from Google, NRG Energy and Bechtel Corporation. Bechtel also built the facility.

Bright Source Energy, an Israeli company, has the computer software controlling the thousands of mirrors reflecting solar energy to the burning heads of towers for boiling water, creating the steam, which drives the massive German Siemens turbines for the production of electricity for 147,000 homes.

Archimedes’ mirrors technology is both a military weapon and a high tech opportunity for solving complicated problems, including global warming. However, such technology is not without its own problems.

The Mojave solar thermal plant is simply too large. Size adds cost, complexity, and central control to a technology with its own potential difficulties and dangers. In fact, errors can turn the solar mirrors into burning mirrors. Second, the Mojave mirrors affect about 150 species of animals and plants that used to live in those 3,500 acres of land. Some of those species are endangered animals and plants. Yes, millions of dollars have been set aside for mitigation, especially for the protection of the endangered desert tortoises. Nevertheless, thousands of birds die, probably burnt to death, yearly at the Mojave plant.

In addition, lots of water is necessary for steam-producing electricity. But Mojave Desert receives very little rain. Its groundwater dates probably thousands and millions of years.

The other fact is that solar panels are out competing solar mirrors. It’s possible the gigantic Ivanpah solar thermal energy plant may be the last of its kind. And unlike Archimedes, who is still relevant and inspiring, gigantic technologies like those employed at the Mojave plant are unsustainable and belong to a previous age.