By: Aris Michopoulos, Ph.D. It looks like yesterday but 33 years have passed since Paul Kotrotsios published the first edition of Hellenic News. Armed with...
Read more
People

The American Hellenic Institute (AHI) announced it has published a fact sheet that details the humanitarian issue of the Missing Persons in Cyprus, a...
Read more 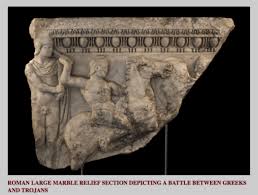 “You must inform all about the sarcophagus,” said Consul Manos Kourabakis, of the Consulate General of Greece. “This is a major event of a lost antiquity that was returned to Greece after being stolen thirty years ago. The sarcophagus is from 200 B.C.”  Greek radio was broadcasting this event in the media. A sarcophagus is a stone coffin with a sculpture or inscription. Consul Kourabakis showed me a photo of an inscription from his I-Phone. at the February  12th “International Day of Greek Language and Culture” social of the Federation of Hellenic American Educators, the Federation of Hellenic Societies of Greater NY and the Hellenic Paideia of America in the Cultural center of the Holy Trinity Cathedral, New York City.

“A stolen marble fragment from an ancient Greek sarcophagus was recovered by Manhattan prosecutors and returned Friday for eventual display in an Athens museum. Manhattan District Attorney Cyrus Vance Jr. handed back the irreplaceable second-century artifact at a repatriation ceremony with Greek Consul General Konstantinos Koutras.The piece depicting a battle between Greek and Trojan fighters was stolen from Greece in 1988, smuggled across Europe and finally brought to New York, officials said.”1 The Greek Culture Day program brought to our attention from a young, energetic diplomat a  major antiquity recovery. “The nearly 2,000-year-old artifact will be returned to Athens and the National Archeological Museum.”1