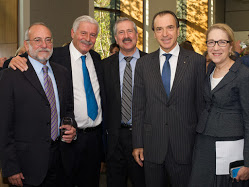 The emblematic stainless steel work by Greek sculptor George Zongolopoulos Poseidon, (1957), was presented at a Dedication Ceremony on October 1st at the George Washington University. Poseidon, 3.90 m. high, was installed permanently in July 2014 outside the new Milken School of Public Health building, the first sculpture of a Greek artist that is installed outdoors in Washington, D.C., situated on one of the main avenues of the capital of the United States.

Ambassador of Greece to the U.S. Christos Panagopoulos, addressing the ceremony, underlined his appreciation for the stellar cooperation between the George Zongolopoulos Foundation and George Washington University, one of the most prestigious academic institutions in the U.S. “The sculpture is a true testament to the flourishing Greek – American friendship. I am certain George Zongolopoulos would be utterly excited for the journey of his Poseidon.”

The sculpture was donated by the George Zongolopoulos Foundation in Athens to the George Washington University, in light of the worldwide prestige of the University and its unique location near the White House. The Dedication Ceremony for Poseidon was held under the auspices of the Provost of the George Washington University with the presence of prominent Greeks of America and other prominent individuals, including curators of major museums, distinguished personalities of the Arts, Sciences and Academicians.

At the same time, on the premises of the Milken School of Public Health there will be a parallel exhibition dedicated to George Zongolopoulos with a selection of photos of his iconic large scale sculptures. This will be the first exhibition of George Zongolopoulos’ works that is held in the U.S. The exhibition also includes photos of large scale works that are installed in public spaces in Greece, and the emblematic mobile with water sculpture “Umbrellas” that is located at the building of the Council of Ministers of the European Union in Brussels.

The presence of the Poseidon sculpture in Washington, D.C. honors both the sculptor George Zongolopoulos, and Greek Art and also Greece itself. The event will contribute to the further development of artistic and cultural activities between Greece and the United States.