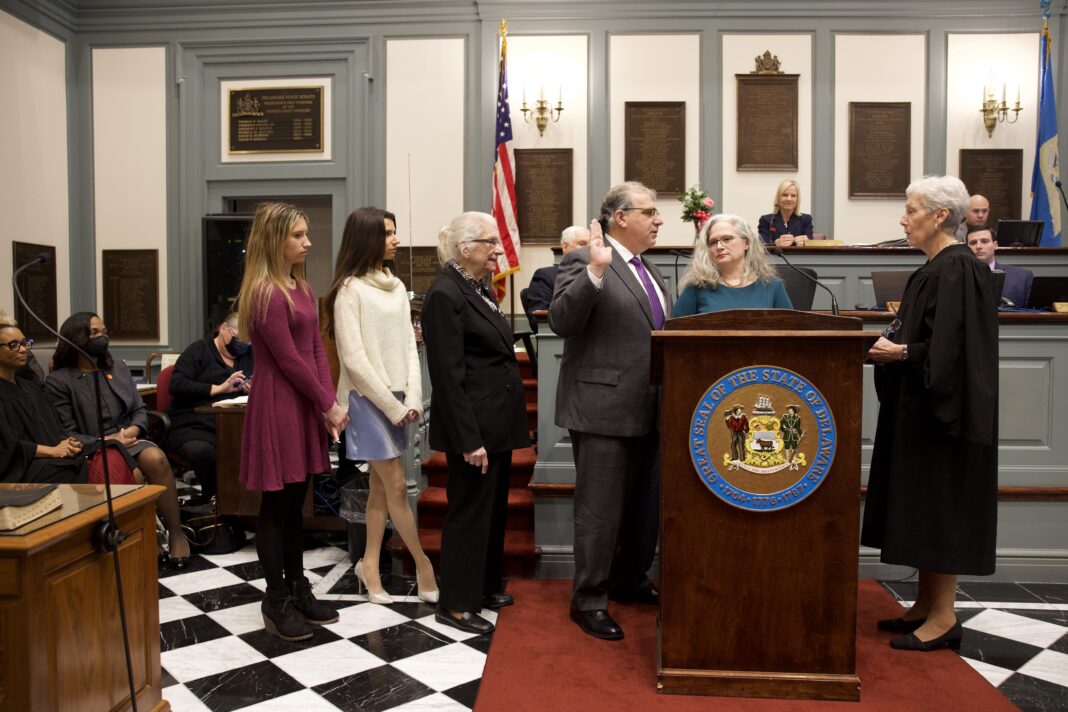 On January 10, Spiros Mantzavinos was sworn into his second term as a Delaware State Senator.  Re-elected with 59% of the vote this past November, Sen. Mantzavinos will serve as chair of the Senate Banking, Business, Insurance & Technology Committee, vice chair of the Senate Veterans Affairs Committee, and a member of the Senate Elections & Government Affairs, Environment, Energy & Transportation and Labor committees. He also will hold a seat on the Joint Capital Improvement Committee.

The grandson of immigrants from Cephalonia, Sen. Mantzavinos got his first taste of government service as a legislative assistant and research analyst with the Delaware Senate in the 1990s. He later gained first-hand experience with economic development issues as a vice president of the New Castle County Chamber of Commerce. Subsequently, he worked as a media relations professional for some of Delaware’s largest employers before launching his own communications consulting firm The Mantzavinos Group.

“I want to thank the voters of the 7th Senate District for giving me the privilege of representing them for the next four years,” Mantzavinos said.  “I also deeply appreciate the support I received from so many in the Greek-American Community, not only from Delaware, but from New Jersey, Maryland, Washington, DC and across the country.  Their support was tremendous.”

In addition to running his own small business, Sen. Mantzavinos also taught courses as an adjunct instructor at Wilmington University. He previously served as a member of the Parish Council at Holy Trinity Greek Orthodox Church in Wilmington, an organizer of the annual Holy Trinity Greek Festival, a GOYA advisor, and taught Sunday School. He also previously served on the board of the Claymont Community Center, as treasurer of the Delaware Press Association, and as president of the Delaware Chapter of the Public Relations Society of America.

Sen. Mantzavinos has worked to advance Hellenic causes as well.  Most recently, in 2019 he introduced Senate Foreign Relations Committee Member Senator Chris Coons to Greek-American leaders attending the 35th Annual Hellenic Leadership Conference in Washington, DC.  In 2017, Spiros moderated a panel discussion during the 16th Annual Conference on the Future of Hellenism in America and is a past president of AHEPA Chapter #95.