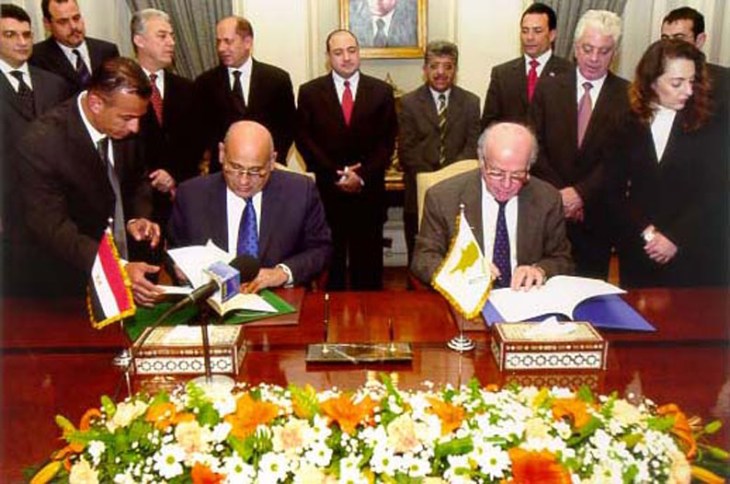 Caption: The Minister of Commerce, Industry and Tourism of Cyprus Nicos A. Rolandis and the Foreign Minister of Egypt Ahmed Maher, sign the Cyprus-Egypt EEZ Agreement in Cairo on the 17th February 2003.

Nicos Anastasiades was twice unlucky in the framework of his success:

There were good opportunities to solve the Cyprus problem in the past decades (Anglo-American-Canadian Plan 1978, Indicators 1983, Consolidated Documents 1985).  Some of us supported very strongly the plans.  But the populists and cheap charmers prevailed.

There was an opening for the hydrocarbons (my proposal of 2006 which was viewed positively by Mehmet Ali Talat).  But the populists and cheap charmers prevailed again.

It seems that the DNA of many Cypriots is in line with the blood test of the charmers.  After all, the loss of one third of Cyprus in 1974 was not fortuitous.  And it is not fortuitous that we have been following the same course, the same line of thought the same blunders since then.

Truly, where are we today?  Where is Cyprus and what about the surrounding area, where fate, history and geography has placed us?

Dangers in the energy sector:

Afrin has fallen to the Turkish troops.  Thousands have died and an unbelievable pillage and brutality have taken place.  In Syria approximately 500.000 people have perished thus far in the civil war.  Eastern Ghouta is in ruins.  Five million Syrian refugees are deprived of food, medication and the necessaries of life.  A Turkish invasion into Iraq is in the wings.  The problem of the Middle East may explode at any moment.   The relations between Israel and Lebanon may deteriorate because of EEZ disputes.  The Aegean may accidentally blow up.

So, what should we do in this messy situation?

If we and Turkey continue with the tug of war and we pull the rope at opposite ends, unless there is a substantive (and not a simply verbal) international support, the weak one will lose; and we are the weak ones.

In the circumstances, my opinion is as follows:

Twenty years have gone by since I first started the hydrocarbons efforts on the 31st March 1998.  Their exploitation will take another 5-6 years.  I would suggest that subject to a reservation of all our rights we put on hold all our hydrocarbon activities for nine months, that is until the 31st December 2018 (a 9- month moratorium).  In parallel all the unlawful Turkish actions (drilling platform, threats, etc) will have to cease as well.  This should happen in a concerted action with the UN Secretary-General, so that he may recommence the dialogue on Cyprus, which is at present fully deadlocked.  If the problem of Cyprus is thus resolved the hydrocarbon issue will also be fully addressed, because it will become part of the duties of the Federal Government, as already agreed.

The above 9-month moratorium will not affect in real terms the hydrocarbons issue of Cyprus, in respect of which 20 years have already elapsed and there is another 5 years to go for their exploitation.  The 9 months will give another opportunity to Cyprus.

An arrangement of the above nature will not constitute a retreat on our part.  It will be an effort to address, in an effective manner, the big problems of Cyprus.  On the contrary, if we do not take the necessary action now, we may pay a very heavy price in the future, followed by national humiliation.  This is what unfortunately happened when we lost 37% of our territory in 1974, when we pursued the S300 missiles and threw into the dustbin $270 million in 1998, when we rendered the Cyprus problem almost intractable through the passage of time and nowadays with the possible loss of our natural gas.

Let us give Cyprus another chance.