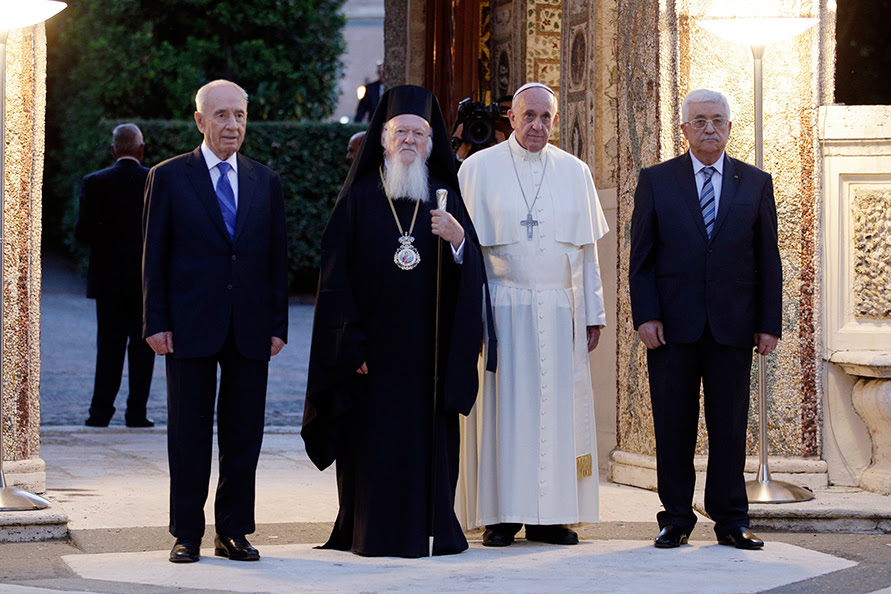 From left, Israel’s President Shimon Peres, Ecumenical Patriarch Bartholomew I, Pope Francis, and Palestinian President Mahmoud Abbas pose for photographers at the end of an evening of peace prayers in the Vatican gardens, Sunday, June 8, 2014. Pope Francis waded head-first into Mideast peace-making Sunday, welcoming the Israeli and Palestinian presidents to the Vatican for an evening of peace prayers just weeks after the last round of U.S.-sponsored negotiations collapsed.

With a renewed commitment to Christian unity and an enduring desire to include people of all faiths in dialogue, His All-Holiness Ecumenical Patriarch Bartholomew, spiritual leader of over 300 million Orthodox Christians worldwide, and his brother Pope Francis joined hands at the Vatican during an Invocation for Peace. Together with the Pope and the Ecumenical Patriarch, the Israeli President Shimon Peres and Palestinian President Mahmoud Abbas participated in the interfaith service of Jews, Christians and Muslims.

The leaders read passages from the scriptures and offered prayers of thanksgiving for God’s creation and asked for God’s forgiveness and peace in the Middle East. Reading from the Book of Isaiah, His All-Holiness reminded the people of the region that God had not abandoned them, and that He would answer before they call, and hear while they yet speak (65: 24).

The Ecumenical Patriarch also called upon God’s blessings upon the Jewish, Christian and Muslim children of the Holy Land and prayed that their shared thanksgiving for all of God’s blessings may remind them that they are brothers and sisters.

Following the prayer service, Pope Francis and Ecumenical Patriarch Bartholomew shook hands with Presidents Peres and Abbas. As a clear sign of their desire for mutual reconciliation and an equitable and sustainable solution to the conflict in the Middle East, the four leaders planted an olive tree in the Vatican gardens.

Pope Francis plants an olive tree with Israel’s President Shimon Peres, left, Palestinian President Mahmoud Abbas, second from left, and Ecumenical Patriarch Bartholomew I, right, in a sign of peace during an evening of peace prayers in the Vatican gardens, Sunday, June 8, 2014.

Pope Francis also stated the following, “I also thank Your Holiness, my venerable Brother Bartholomaios, for joining me in welcoming these illustrious guests. Your presence here is a great gift, a much-appreciated ‎sign of support, and a testimony to the pilgrimage which we Christians are making towards unity.”

His All-Holiness Bartholomew is the Archbishop of Constantinople-New Rome and the Ecumenical Patriarch. He is the 269th successor to the First-Called Apostle Andrew, the founder of the 2,000-year old Christian Church of Constantinople. The Ecumenical Patriarch is a living witness to the world of Orthodoxy’s painful and redemptive struggle for religious freedom and to the innate dignity of humankind. As a citizen of Turkey, His All-Holiness’ personal experience provides him a unique perspective on the continuing dialogue among the Christian, Islamic and Jewish worlds. He is known throughout the world as the “Green Patriarch” for his groundbreaking environmental initiatives and ecological theology. For his inspiring efforts on behalf of religious freedom and human rights, Ecumenical Patriarch Bartholomew was heralded as a Bridge Builder and Peacemaker and awarded the Congressional Gold Medal by the U.S. Congress in 1997.

Additional information may be found at: https://www.patriarchate.org