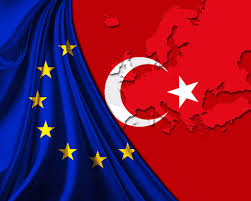 By: Andreas C Chrysafis
Recently, the IMF EU -Troika team visited the occupied area of Cyprus to study and ascertain the costs of the illegal airport in preparation for the enormous loans Cyprus would require to meet the “reunification” costs of the island. Turkey indicated that she may consider contributing a portion of the cost but only if a settlement suits its plans and the Republic’s gas pipeline goes via Turkey to Bulgaria and then into Europe. This may well be the reason as to why the President recently bilaterally agreed with Bulgaria on a gas resolution.

The Cyprus Foreign Minister Mr Kasoulides on the other hand, seems quite receptive by announcing that he does not object to a pipeline going through Turkey and neither does his government and DYSI – his political party. They are somewhat eager to sign a Bi-zonal, Bi-communal Federation (BBF) agreement this year and their insistence raises serious questions as to why the urgency?

Ankara is not stupid! It has a cunning strategy to gain control and be in a position to turn on and off the Cyprus gas taps at will; at least that’s what she envisions! Successful or not that’s another matter but the BBF may provide her with the perfect opportunity to do just that.

The same wily approach is being applied by Erdogan’s Neo-Ottoman regime to manipulate the EU. Taking advantage of the refugee crisis, Ankara sees an opportunity to apply its blackmailing tactics and in so doing receive 6 billion euros upfront as a gift from the EU, “supposedly” to stop the flow of refugees. Such behaviour reveals of a conniving story indeed; a story of an Ottoman ploy to exploit human tragedy exacerbated by Turkey itself!

Today, a delusionary Erdogan regime has become dangerous not only to the Turkish people but also to world peace. From a secular country, Turkey is rapidly sinking into one of an Islamic Fundamentalist nation. Erdogan’s authoritarian obsession of imprisoning journalists and those opposed to his policies are reminiscent of a man who may be suffering from megalomania and has lost sight of reality.

Closing down newspapers like Zaman and Cihan news agency and use of brutality against peaceful protesters with rubber bullets, water cannons and teargas have become front-page news internationally. Sultan-Erdogan refuses to tolerate any kind of opposition to his totalitarian and tyrannical rule. His surreptitious support for ISIL has also raised eyebrows worldwide.

The EU is actually questioning if this Neo-Ottoman country headed by Erdogan/Davudoglu with an extreme religious ideology belongs among western democratises. German Finance Minister Wolfgang Schaeuble said this week that: “the German government had major doubts about whether Turkey should become an EU member or not.”

Turkey’s behaviour against its ethnic minorities by razing entire Kurdish villages with carpet air bombardment and the killing of innocent civilians is certainly not a way for a civilized nation to behave. Applying curfews for weeks on ends and forbidding schools teaching in the Kurdish language indicate that this nation is quickly sinking into a warped Islamism ideology. This repressive regime is certainly reminiscent of dictators like Muammar al-Gadhafi and Saddam Hussein. All signs indicate that another dictator is born to cause havoc in world stability.

However, Turkey’s “promises” to help reduce the refugee crisis and crack down on people-smuggling has convinced Brussels that it means well and yet, it has done little to stop the flow. Instead, Ankara sees this human tragedy as a great political opportunity that cannot be missed.

At this week’s EU summit on the refugee crisis, Davutoglu has turned the conference into a Turkish Bazaar demanding more billions of euros in support of the refugees. Ankara envisions figures closer to 20 billion euros as well as faster EU accession talks and quicker visa-free travel for Turkish citizens across the Eurozone. Ankara’s demands have been fully agreed in principle.

Under those terms, it also means that Cyprus is to abandon its EU veto power in support of Turkey’s EU membership and allow the opening of the remaining Chapters that Cyprus had been objecting to. When this is ratified it would also signify the abolition of the Republic. Under this EU-Turkey agreement on the refugee crisis, it would certainly become the catalyst for the abolition of the Republic of Cyprus

The President of the Republic signed the draft EU-Turkey resolution (did not abstain) signifying that a deal between Turkey and the EU has been agreed. Without a doubt, this is a political and a cunning victory for Ankara – the fox had outsmarted an entire EU failed institution.

The suffering of some is a blessing for others and the Syrian refugee madness of people movement has transformed the region forever. Cyprus has also not been immune to the human misery that has seen a 42% increase of asylum requests in 2015 from the previous year.

This humanitarian development however, its not as dangerous as dealing with Turkey’s ruthless trickery – a country that has unilaterally decided to lay claim to Cyprus’s gas deposits and using the Turkish Cypriots as scapegoats for its illegal claims. A gas pipeline route has now become the hidden jewel in the area and like any bully would, a desperate Ankara is pushing to ensure control of such a pipeline now that Russia has dropped Turkey.

The Turkish Foreign Minister Mevlut Cavusoglu, referring to hydrocarbon reserves in Cyprus, illustrated that Turkey is available as a “reliable territory of transit of energy gas reserves.” If Russia were wise enough to dump Turkey, it would be very unwise for Cyprus to trust anything Turkey offers on a poisoned platter.

If and when an agreement were to be reached this year, the unofficial “reunification” figures could be in excess of 60 billion – over and above the current 9 billion IMF-EU Troika loans due for maturity by 2031. Just like Greece, the interest payments alone would kill any hope to overcome Troika’s long-term economic colonisation. As security, IMF is given the right to handle all banking transactions of Cyprus’s gas revenues.

What a mess indeed!

Would Cyprus find the magic formula to formulate a dynamic lasting national policy in the interest of the nation or would it be ensnared by Turkey’s fine spider-web and forever be trapped by EU’s shallow promises of nothing?

That remains to be seen but the signs do not look so promising!