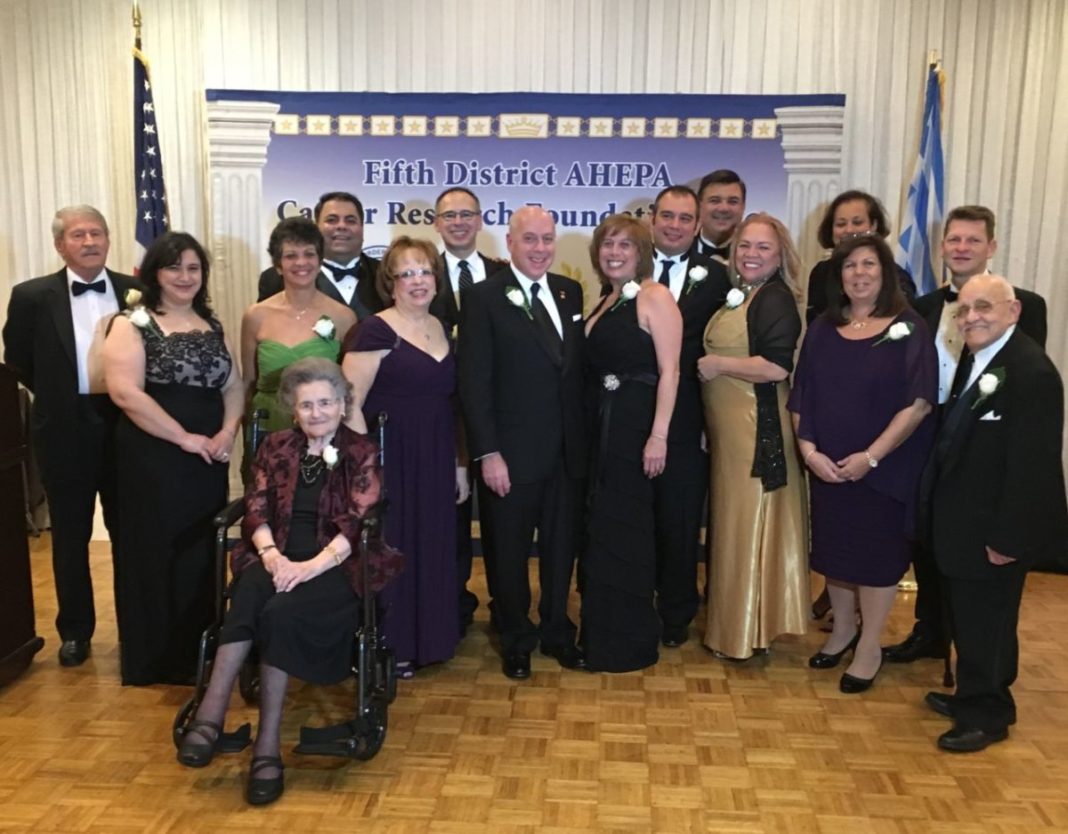 The Foundation was privileged that attendees came from all over the United States, Canada and Greece to be a part of this historical milestone.  Further, the Foundation was honored that Congressman Frank Pallone, Jr. (NJ-06) was able to attend and commemorate this special evening with the Foundation.

Congressman Pallone, who himself is a member of the Order of AHEPA, is also a ranking member of the Energy and Commerce Committee which oversees healthcare.  He spoke about the 21st Century Cures Act and Moon Shot on Cancer Research Program.  Further, he spoke about the practice of precision medicine regarding cancer treatment and its benefits.  Pallone stated “that the money you raise helps match the federal government’s initiative of cancer research.  I am proud of your efforts and I thank you for what you do.”

Perhaps the most poignant moment of the evening, is when Past Foundation Chairman Georgette Boulegeris, PDG shared her personal journey of breast cancer.  She stated that “two years ago, two days before the Gala I had my first chemotherapy treatment.  As a member and supporter of the Foundation for many years, when you are on the other side of the spectrum you have a different perspective.  Your life changes and so does the lives of people around you.  I was lucky, I was diagnosed early, and they did a test on me called the oncotype test which determines the probability of reoccurrence of cancer.  The seed money for this test was given by this Foundation.”  For now she considers herself surviving cancer, until her oncologist says she does not want to see her anymore she will not consider herself cancer free.

It is hard to believe that twenty-eight years ago, armed with coin collection canisters that the Foundation would be celebrating the cumulative awarding of $1,000,000-in cancer research grant giving. To date they have raise approximately 1.5 million dollars through various fundraising programs.  Foundation Chairman Antoinette Marousis-Zachariades awarded two chapters from District 5 with the Golden Canister Award whose assistance has been invaluable for their service to the Canister Program.  They are the only chapters since the inception of the Program to continuously partake. The Order of AHEPA, Alexander Hamilton #54, Paramus, NJ for 25 years of service and the Daughters of Penelope, Aulis #195, Ocean, NJ for 27 years of service.  Accepting the award on behalf of their chapters, Demetrios Bayiokos, Chapter President, Louis Arvanitis, PSG, Chapter President Patricia Vlahos, PDG and Sophia Anest, may their canisters always be full.

Basil Mossaides, Executive Director of the Order of AHEPA once again served as the Master of Ceremonies.  He summed of the evening in one simple statement “we gather here today in District 5 for a historical event.  It is a wonderful opportunity to show case the great work that the AHEPA family does but also the wonderful work that goes on here in District 5 and I really think because of your efforts that one day, very soon we will be here celebrating the eradication of this disease.”

Many AHEPA Family dignitaries were in attendance from near and far, the Sons of Pericles Supreme President, Nicholas Apostolou who hails from New Jersey, District 5 was extremely proud to be a part of a district that raises money for cancer research.

Past Foundation Chairman George G. Horiates, Supreme Counselor offered a toast in memory of the Foundation’s Founder Julian “Woody” West who had the foresight to initiate the idea of forming the Foundation and raising money for cancer research.

Daughters of Penelope Grand President Jan Spanos thanked the Foundation for what they do.  As a two time survivor of cancer, she stated that “you are a living testimony to the good things that we stand for as an AHEPA Family.  As a district you are an example and should be proud.  On behalf of all of those in need I sincerely thank you for what you do and hope that you continue to raise millions of dollars more.”

Order of AHEPA Supreme President and Past Foundation Chairman Andrew C. Zachariades stated that “the importance of us being here tonight is really the legacy of the AHEPA Family. There is only one Order of AHEPA, Daughters of Penelope, Sons of Pericles and Maids of Athena, one AHEPA Family, who since 1922 has carried out the philanthropic importance of the organization, whose donations have exceeded over a billion dollars.  He further thanked the doctors for all of their countless hours that they put into cancer research trying to find a cure for cancer.

The first grand award was presented on September 16, 1990 in the amount of $5,000 to Fox Chase Cancer Center, Philadelphia.  Antoinette Marousis-Zachariades, Chairman and Christos Prentzas, Vice Chairman presented the 2016 Cancer Grant Awards to the following doctors and institutions.

Coming full circle the Foundation felt that Fox Chase Cancer Center had to be awarded the one millionth dollar in cancer research grants. Erica Golemis, Ph.D. accepted the grant on behalf of herself and her team at Fox Chase Cancer Center, Philadelphia, PA, for their study on Investigating STA-8666, a Novel HSP90- Inhibitor Drug Conjugate to Sn38, in Prevention and Control of Lung Cancer.

As balloons were released to mark this significant moment, to the surprise of all the guests, the Fralinger Mummers String Band joyfully came marching in to celebrate the fact that the Foundation did it, they MARCHED TO A MILLION bringing their total grant giving awards to $1,005,000, so they may march on, to raise their next $1,000,000.

The Foundation was formed in October 1988, by the Fifth District Order of AHEPA to raise funds from its members and the general public for cancer research grants.  Shortly, thereafter the Fifth District Daughters of Penelope came on board uniting the AHEPA Family of District 5 behind a common cause of philanthropic support of cancer research.  Please visit their website at www.5thdistrictahepa-crf.org, Facebook Page (Fifth District AHEPA Cancer Research Foundation, Inc.) and GoFundMe Virtual Canister Program. 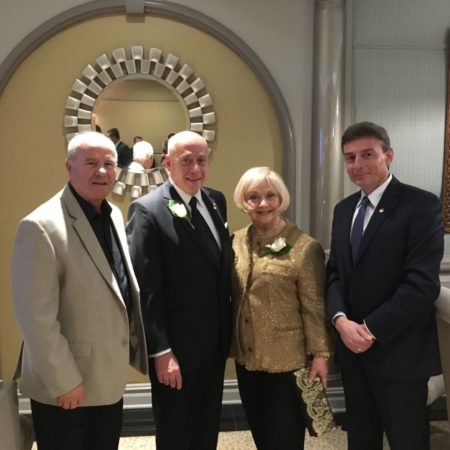 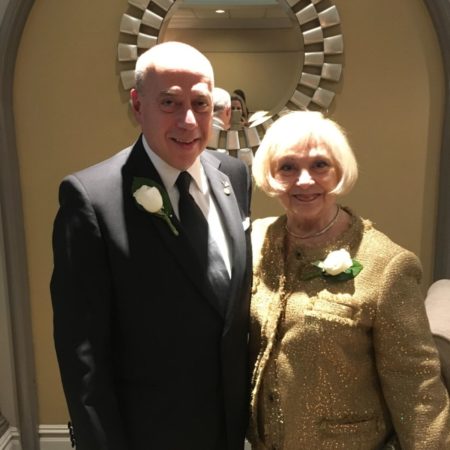 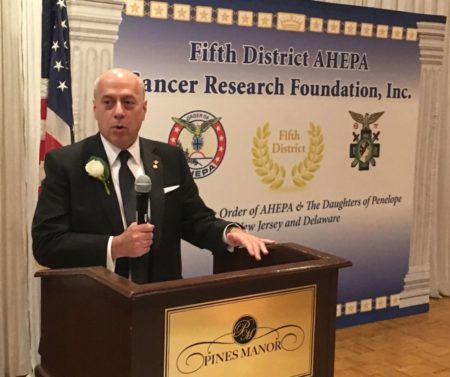 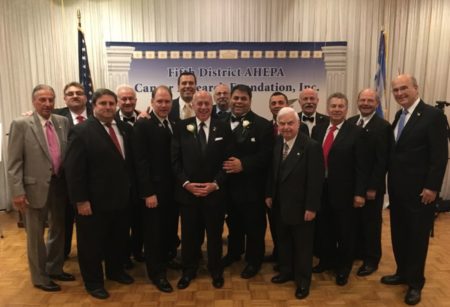 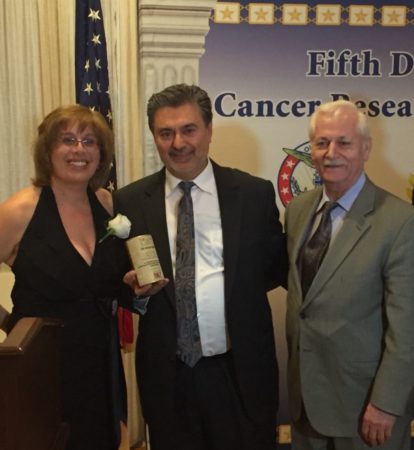 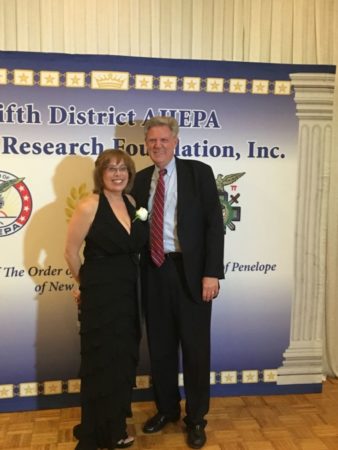 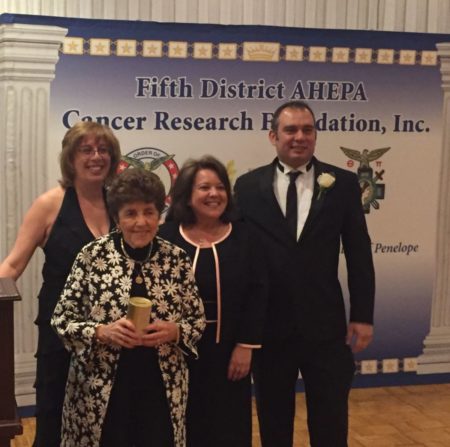