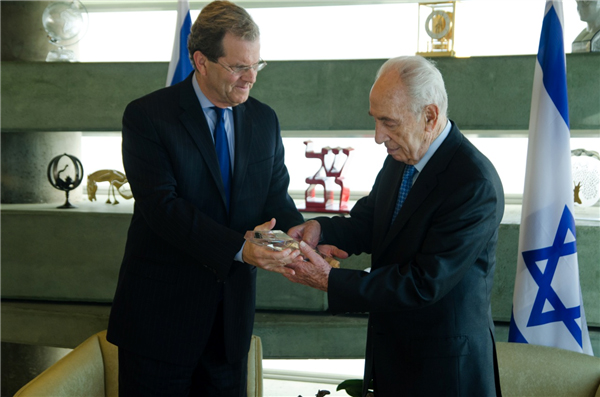 WASHINGTON, DC, November 4, 2014 — Shimon Peres, the former President of Israel, revealed — at the October 23 Washington Oxi Day Foundation annual black tie gala in Washington, DC — the profound importance of Greece to his life, both personally and ideologically. He explained how the Greek people saved his father’s life during the Holocaust and how his nascent nation of Israel went to great lengths to base its foundation on Greek philosophy and knowledge.

Peres made these remarks while accepting the Metropolitan Chrysostomos Award, via video. The Washington Oxi Day Foundation gives that award annually to an individual who shows today the kind of courage against discrimination that was shown by Metropolitan Chrysostomos during the Holocaust. When the Metropolitan’s Nazi occupiers demanded a list of the Jews on the Greek island of Zakynthos, he saved them all in mountain villages. He then gave the Nazi commander a list containing only two names, his and the Mayor’s. For more information on this award, click here.

Peres explained how during the Holocaust his father was a soldier in the British Army fighting in Greece when the Nazis overran that country. Peres said:

“He knew if he was captured by the Nazis, they would finish him. He found a monastery of monks who decided to give him shelter. They risked their lives because if the Nazis would discover they were hiding a prisoner and a Jew at the monastery, they would kill them. The monks looked after him for two years risking the entire time their lives. My father was overwhelmed.

He learned their language and their music. He came back home happily and sang to our children, Greek songs. When he came back home, he was totally taken by the Greek people, the monks, and by the way they handled him, risking their own lives.”

Peres also explained how the state of Israel was established on a foundation of ancient Greek values and philosophy. Peres said:

“The second connection with Greece is ideological. You know, David Ben-Gurion, the founder of the state of Israel, decided to learn the Greek language. Why? He thought there was something missing in our history that was the meaning of the state. He thought that we had great prophets, we have great priests, and maybe we have some good kings, but we do not know real statesmen.

Ben-Gurion asked for advisors to come and teach him what he thought was one of the weaknesses of Judaism, the lack of understanding what is a state. Everyone thought that what we miss in our Bible is found in the Greek philosophy. He studied the Greek language and made it part of our ideology. He decided to learn the Greek philosophy in order to understand what it means to be the head of a state. I think he became the greatest statesman the Jews ever had. I was his pupil.”

Peres concluded by saying, “So you can see that my connections to Greece come from two different angles (his father’s life and country’s ideology). They are still part of my life and part of my thoughts.”

To see a video of this presentation and President Peres’ full remarks, click here and scroll down to the link that reads “Watch Video of Peres Metropolitan Chrysostomos Award.”