Ancient Greeks worshiped Gaea, a primeval goddess viewed as mother of all, creator of the earth and the universe. In modern times, an environmentally friendly Greek company dedicated to spreading the health benefits of the traditional Greek diet throughout the world adopted Gaea’s name, committed to earning it by showcasing the fruits of the Greek soil.

Two and a half decades ago, a British gourmet asked Aris Kefalogiannis why the Greek foods of the famous Mediterranean diet were not widely available in her country. Kefalogiannis, an Olympic water polo player from a prominent Greek political family, was working on graduate degrees in law and business in London. To remedy the problem implied by that very good question, he established the company he called GAEA in 1995.

GAEA’s products are the result of a unique combination of innovation, updates of tradition, research, and the latest technology. This focus on promising developments was especially evident in 2015, when the company launched new lines of innovative, preservative free olive snack packs, as well as new flavored olive oils and extra virgin olive oils, highlighting the flavors of different Greek regions.

GAEA introduced the first liquid free, airtight olive pack in the world, featuring unpasteurized snacks with only 3% salt—the outcome of 2½ years of research.  Gaea Fresh was another novel product. Soon winning numerous accolades for its distinctive flavor, this early harvest extra virgin olive oil is produced just three hours after olives are harvested. It is then packaged in dark glass bottles with the inert gas nitrogen to keep out light, heat, and oxygen and keep in its fresh green herbal flavor.

Customers have appreciated the top quality GAEA’s team always strives to offer, using strict quality control procedures at their energy efficient, eco-friendly 6500 square meter factory in Agrinio, northwest of Athens. Working with the Swiss organization MyClimate to reinvest in renewable energy resources in developing countries throughout the world, GAEA produced the world’s first carbon neutral olive oil and olives. The company also presented the first olive oil range in the world to have its water footprint calculated in preparation for more sustainable water use.

GAEA’s dedication to the best, greenest practices in cultivation, harvesting, production, and storage involves many factors, including a partnership with farmers. GAEA was the first olive oil company in Greece to do contractual farming with the same people year after year—individuals and cooperatives. Advised and respected by the company, GAEA’s producers grew into a proud family that knows the fruit of its labor is appreciated worldwide, with its origin in Greece never forgotten.

Recognizing the “tremendous potential” for culinary tourism in Greece, GAEA’s Marketing and e-Trade Manager, Pantelis Iliakakis, believes “there is no more powerful tool for introducing our diet and our products to the world” than inviting visitors to learn about them while they are in the country. For this reason, GAEA’s efforts to educate consumers about the quality characteristics of olive oil started as soon as the company began, and they continue to this day.

These efforts led to the establishment of Gaea’s Olive Oil Bar, where visitors learn to distinguish the flavors of different olive oils and find out how a top quality extra virgin olive oil should smell and taste. Participants sip olive oil in a guided tasting, noticing the bitterness and spiciness, as well as sampling foods made with different olive oils to discover the great difference olive oil can make as it transforms the flavor of food.

In the 1¼ hour seminar at the Cookoovaya restaurant next to the Hilton Hotel in Athens, Iliakakis, who is also an olive oil sommelier and educator, tells participants about the benefits of the Mediterranean diet. He explains such details as the best balance of omega 6 and omega 3 fatty acids and describes the beneficial properties of the oleocanthal and oleacin in extra virgin olive oil, including their anti-inflammatory and antioxidant actions. The “Myth Busters” section of the seminar clears up a series of misconceptions about olive oil, such as the mistaken belief that olive oil is not good for frying.

Like the company, its products, and its website, GAEA’s seminar honors olive oil as a key element of Greek history and culture through the millenia. A beautiful video on GAEA’s website and in the seminar shows “the world and our clients the heritage of the olive tree here in Greece, how important it is, how far it goes into our history, and the importance it has even today,” as Iliakakis puts it.

The video begins with a bearded grandfather surrounded by his family in an olive grove. He describes his boyhood efforts to gather olives left over after the harvest, so he could sell them in a nearby village and buy himself shoes for Christmas. But the sack of olives he had painstakingly gathered and hidden in the hollow of a tree disappeared. The boy’s older brother gave the younger child his own shoes to make him feel better. “Never mind, he said, the olive tree will always be here. And he was right.”

Through education, exports, environmental and social consciousness, and philanthropy, GAEA continues to protect and share this precious Greek heritage.

AHEPA Celebrates the Selection of Alex Karras to the Pro-Football Hall... 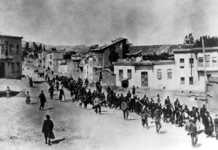 The Christian/ Greek Genocide During the Late Ottoman Period 1894-1924 Panel...

Naturally Thessaloniki is a foodie city