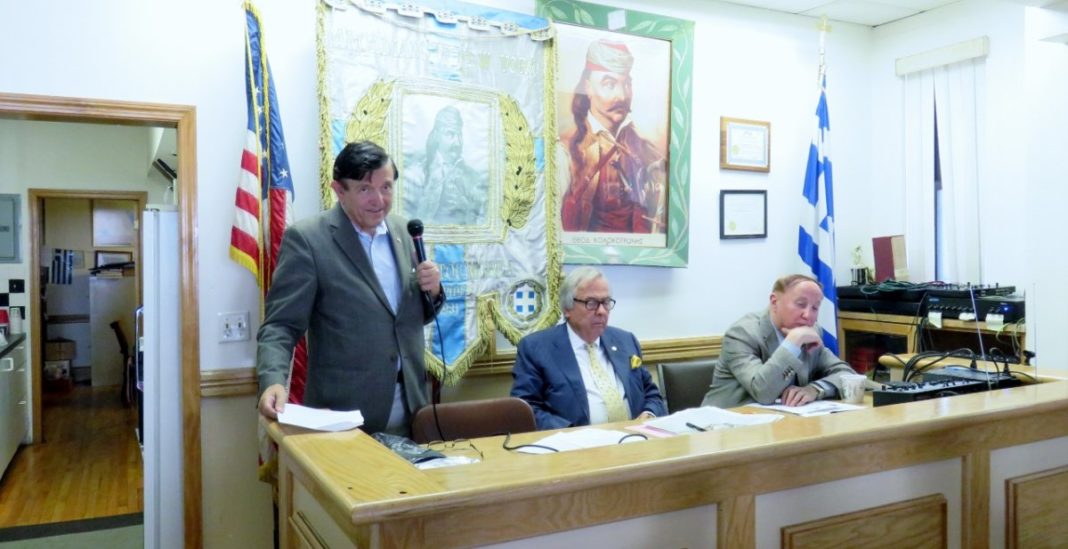 On Sunday, September 25th, 2016,  the 195th Anniversary of the “Alosis of Tripolis” (The Siege of Tripolis) was remembered by the “Geros Tou Morea” chapter of the Pan Arcadian Association of America. A memorial service was held at St. Demetrios Church of Astoria. A luncheon followed at the “Geros Tou Morea” civic center in Long Island City. The chapter was founded in 1931. Dr. John G. Siolas was the keynote speaker for this Day of Remembrance.

“We were the first to rebel against the Turkish rule,” said Dr. Siolas.  My great-great uncles Georgaki and Kostaki were bodyguards of Theodore Kolokotronis. Everyone in this room has an ancestor who fought with Kolokotronis. One can trace one’s ancestors in the National Archives of Tripolis. September 23rd was the first major victory of these Chieftains, Kleftes (mountain fighters), Armatoloi (semi-free soldiers) in the fall of Tripolis (Tripolitsa), the unofficial capital of the Peloponnese, because of its strategic location. The headquarters of the Turkish army were located in Tripolitsa. The successful siege was the first major victory. Greek fighting forces were able to gain national support and the aid of Phil-Hellenic nations.”

“God signed the Freedom of Greece and He will not take back his Signature,” – Theodore Kolokotronis.

The Turks in 1821 Tripoli knew the Revolution was about to erupt. They demanded the appearance of every area’s clergy and staff to come to Tripoli with the purpose of imprisonment and torture. The clergy knew if they refused to go to Tripoli, the revolution would not begin, resulting in genocide. For the good of the nation, they sacrificed their lives, endured martyrdom.  Later they were beheaded, with their heads being paraded in the streets of Tripoli.1 They are known in Tripoli as the “New Martyrs”.

This is the importance of the spirit of the Greek Revolution of 21 and the resistance of Kolokotronis’ forces. A nation of slaves, unarmed, a David that rebelled against the mighty of the earth and stood up against the Ottoman Empire. They replied “Victory of Death” with their clergy allies. They beat the Goliath, the Ottoman Empire. 2