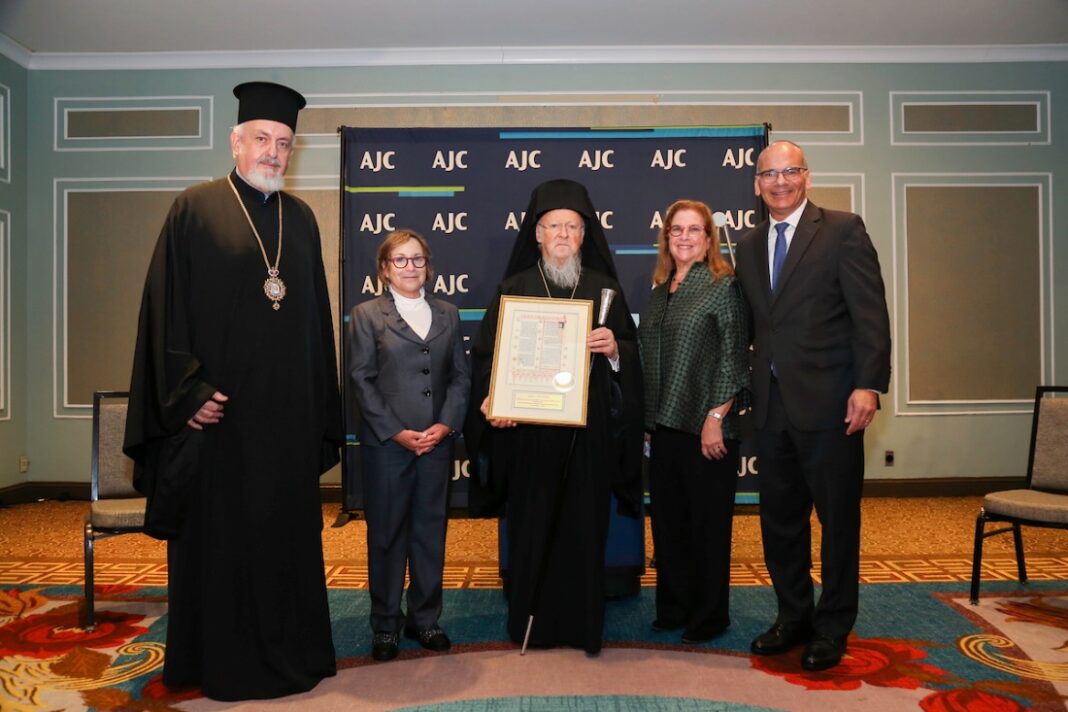 “It is a privilege and an honor to receive, from the hands of such esteemed friends, this Human Dignity Award of the American Jewish Committee,” said Patriarch Bartholomew. The Patriarch has been the spiritual leader of Eastern Orthodox Christianity since 1991 and an exemplar of religious leadership for people of all faiths.

His All-Holiness conveyed “deepest gratitude for this expression of love and care, not only towards our humble person, but also towards what the Ecumenical Patriarchate stands for: dialogue, reconciliation and the fight against religious extremism, hatred and antisemitism.”

“To fight antisemitism, hatred, and discrimination of all kinds, we all need to be involved,” Bartholomew said. “The role of education and family is very important indeed, but religious communities also have a key role to play in eradicating racism, xenophobia, and antisemitism.”

AJC, a Jewish pioneer in interreligious relations, began its special relationship with the Orthodox Church in New York half a century ago. AJC was a founding member of the formal dialogue between Orthodox Christian and world Jewish leadership launched in March 1977, in Lucerne, Switzerland.

“Patriarch Bartholomew, the Ecumenical Patriarchate, and the Greek Orthodox Archdiocese of America have been partners in our core commitments to defeat antisemitism in all its renascent forms and to support the State of Israel’s quest for security and peace among the community of nations,” said AJC President Harriet Schleifer.

AJC delegations have met with Bartholomew over the past 30 years in many places, including Jerusalem, Washington, Rome, Thessaloniki, New York, and Istanbul, home of the Ecumenical Patriarchate.

“Your All-Holiness, we at AJC have been the Ecumenical Patriarchate’s partners not only in advancing Orthodox-Jewish relations, but also in assuring religious freedom for all, especially in Turkey, home to the Patriarchate, and throughout the Middle East, where Christianity was born and is now threatened,” said Rabbi Marans.

AJC’s Human Dignity Award is a facsimile leaf of Genesis chapter 1 in the Kennicott Bible, the lavishly illuminated Hebrew Bible that survived from medieval Spain, before the expulsion of the Jews in 1492. Combining Jewish, Christian, and Islamic artistic motifs, the Kennicott Bible captures the spirit of interreligious relations which Ecumenical Patriarch Bartholomew exemplifies.

“The opening of the Hebrew Bible has been at the core of the Patriarch’s commitment to human dignity, which Jewish tradition calls Kevod Habriyot, respect for God’s creations, human beings – created b’tzelem Elohim, in God’s image – and Earth, l’avdah u-l’shamrah, to cultivate it and protect it,” said Marans.

Also participating in the award ceremony were His Eminence Archbishop Elpidophoros of America and His Eminence Elder Metropolitan Emmanuel of Chalcedon, who has led the Ecumenical Patriarchate’s dialogue with the Jewish people for decades. Both are longtime partners of AJC.

Tomorrow, on the thirtieth anniversary of enthronement as Ecumenical Patriarch, Patriarch Bartholomew will lead the Orthodox Thyranoixia, the opening doors ceremony for St. Nicholas Greek Orthodox Church, destroyed in the September 11, 2001 terrorist attacks on the World Trade Center. AJC contributed to rebuilding the church.

Rabbi David Rosen, AJC Director of International Interreligious Affairs, will be the Jewish speaker at a celebration in Greece later this month of Patriarch Bartholomew’s thirty-year tenure as Ecumenical Patriarch.