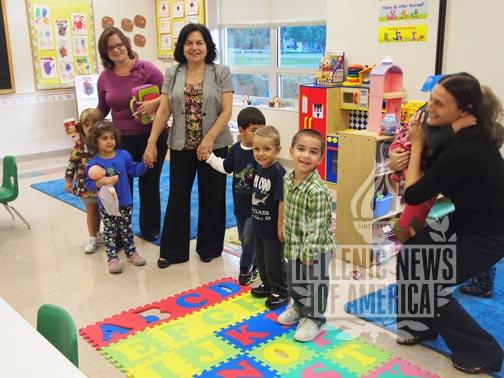 By Dimitri G. Soultogiannis
Special to the Hellenic News of America

Hamilton, NJ—«It is everyone’s responsibility to keep our Greek culture and education alive in our area,» said Dr. Spiros Spireas, President of the Saint George Greek community in Trenton, NJ during his speech at the Grand Opening of the first bilingual Greek preschool in Hamilton.

Dr. Spireas along with the school’s principal Mrs. Georgia Triantafyllou as well as the Greek-Orthodox Metropolis of New Jersey and his Eminence Metropolitan Evangelos, worked very hard to make this dream come true, the creation of a daily Greek pre-school in Southern New Jersey. The Grand opening took place on Monday September 19th, 2001. Besides Dr. Spireas and Mrs. Georgia Triantafyllou with their families, representatives of the Greek-Orthodox Metropolis of New Jersey, representatives of the local and Greek-American media, members of the Saint George community, the opening also attended publishers of the Hellenic News of America and the National Herald, Paul Kotrotsios and Anthony Diamataris respectively.

«Noone should forget what our teachers do for our children on a daily basis,» said Dr. Spireas. «Today we should all celebrate this great achievement,» he said. The school’s principal, thanked Dr. Spireas and all those who worked hard for the school to come to life especially the teaching staff which she praised. «We are starting off with 10 students but this number will increase and our school will gain more students as we move along,» Triantafyllou said. The principal also thanked all those members of the community who helped her when various problems arose, such as bureaucratic issues with the state of New Jersey, during the completion of the project.
The Grand opening also attended members of the Teachers-Parents Association. Mrs. Ourania Rotou, mother of two boys attending the school said just as everybody else she wants the best for her children. «Before I enrolled my children to the school I did not know anyone here besides Mrs. Triantafyllou, however that was not a deal breaker for me. I believe in what the school is trying to accomplish and I fully support them,» she said.
National Herald publisher Anthony Diamataris congratulated everyone who worked on this project. «I want to thank and congratulate all of you because you build schools, you don’t close schools, along with our church we can keep our Greek culture going,» he said. Diamataris also added that in many cases throughout Greek history, from the Fanariotes Era until today, it was only a few brave and wise men and women that took Greece forward and all educators are included in that group. Diamataris also praised Dr. Spireas for his sense of responsibility and services towards our country, Greece, our religion and our civilization. «I congratulate you from the bottom of my heart because you fight daily for our language and religion,» he said.
Dr. Anastasios s, a proud member of the local community, praised all those who keep Saint George’s Greek spirit alive. «Our schools…keep our schools open and please, please educate our children,» he said. «If we are not proud of who we are we cannot possibly move forward,» he said. His Eminence Metropolitan Evangelos thanked everyone who worked on the project and mentioned that this is the 4th school that opens up under the auspices of the Greek-Orthodox Metropolis of New Jersey, the other three schools are located in Baltimore, Annapolis and Virginia. His Eminence also mentioned that Hellenism and Orthodoxy go hand in hand and that we should not forget that we need our church and our religion in order to move forward.