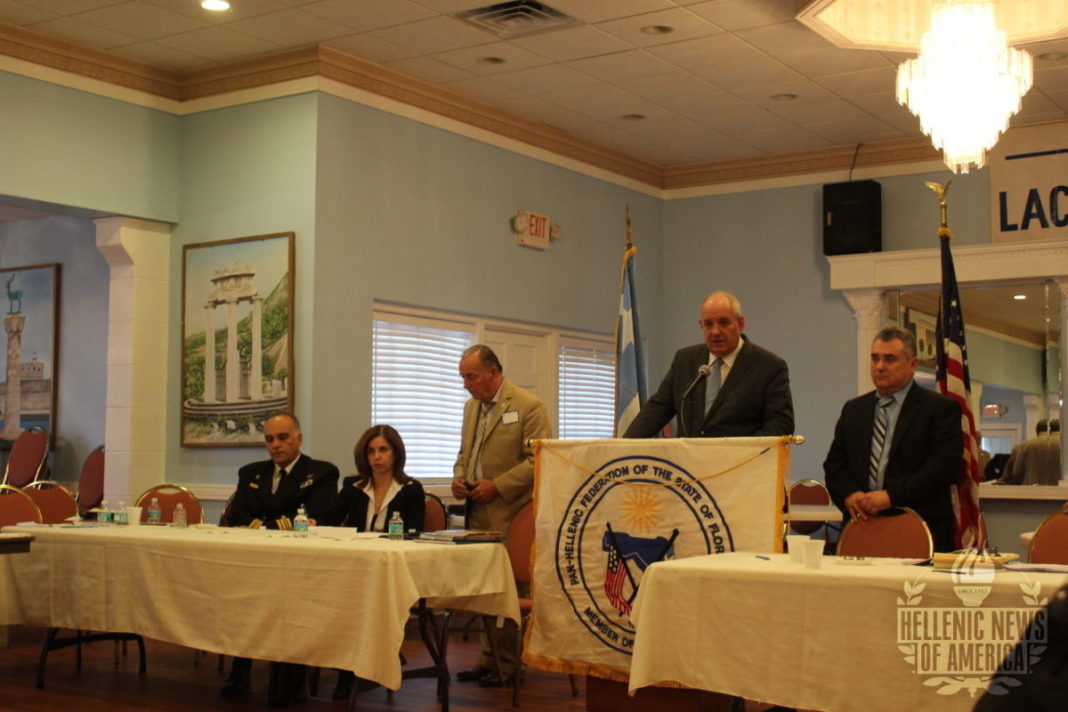 Today, Supervisor Bill Reilich and the Greece Town Board welcomed the Deputy Minister to the Prime Minister of the Hellenic Republic, Mr. Terence Nikolas Quick, for a diplomatic presentation ceremony honoring the people and the town of Greece. This historic visit by Mr. Quick marks the first diplomatic visit to the town by the nation of Greece since the town’s inception in 1822. Mr. Quick’s visit was coordinated between the Hellenic American National Council, the Town of Greece in an attempt by the Government of Greece and the Council to honor the Town for taking the name of the Country of Greece during its struggle for independence against the Ottoman Turkish Empire in 1821.

“Today’s historic visit by Mr. Quick is a first between our Town and the nation of Greece” said Supervisor Reilich. “195 years ago in 1821, the people from the country of Greece began their struggle for independence and freedom from the Ottoman Turkish Empire. The idea of freedom and liberty was not unknown to the founders of our town whom many themselves once fought for independence and freedom during the American Revolution. That human struggle for independence was something which was admired by the founders of our town and as a sign of support and respect towards the people of Greece, adopted the name Greece as our own. Today’s ceremony highlights our mutual understanding of freedom and liberty, and future generations will look back on today as an example of respect and honor between our Town and the nation of Greece.”

On March 22, 1822 the New York State Senate and Assembly passed a resolution authorizing the creation of the Town of Greece which was formed out of the town of Gates. The founders of the town adopted the name after the nation of Greece who had been fighting for their independence against their Ottoman Turkish oppressors. Too many in the United States at the start of the 19th century, freedom and liberty two very common ideologies. Having fought and ultimately gaining our independence in 1781, many Americans were sympathetic to the Greek cause for freedom and liberty.

“On behalf of Prime Minister Alexis Tsipras and the President of the Hellenic Republic, Prokopis Pavlopoulos, we would like to extend our gratitude and respect to both the people of the Town of Greece and the founders of the Town for adopting the name of our nation as your own” said Deputy Minister Quick. “Today we are celebrating the 194th Anniversary of the naming of the Town of Greece. The significance of this event is our mutual understanding that both freedom and liberty are important to the development of any nation. I am proud to have had this opportunity and share with the residents of the Town his historic day.”

Previous articleONASSIS CULTURAL CENTER NY INVITES VISITORS TO WALK IN THE FOOTSTEPS OF THE GODS ON MOUNT OLYMPUS, AS IT PRESENTS A SPRING SEASON ON THE THEME OF GODS AND MORTALS, MARCH 24 – JUNE 18
Next articleHellenic News Of America: Αφουγκραζόμαστε την θέληση για πλουραλισμό στην ενημέρωση Του Θανάση Μπολέτη