A Greek American Perspective On International Relations All Americans Should Care About By Eleni M. Papageorge 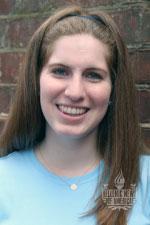 I had the opportunity of a lifetime attending The American Hellenic Institute’s Foreign Policy Trip. I am so grateful to have been chosen to participate in this amazing program, especially because I am not majoring in foreign policy. I am a speech pathology and psychology double major, minoring in deaf studies, not a student of politics, government, or international affairs. I spend my days learning speech impediments and not political disputes. Having only my strong background in social justice issues, a lifelong interest in government and politics, and my Greek heritage to promote me, I was ecstatic to have been chosen for this experience, in addition to being daunted by all the Greek and Cypriot affairs I did not know.

I entered this trip with only the basic Google search information in my repertoire, and I was afraid I had taken a spot on this trip from someone who could better use this experience in their future career. I was also unsure if I could connect with any of the issues about which I would be learning. But after completing the trip, I realized that like American politics, you do not need to be working in the political sphere to be actively exploring international issues; and in fact, we should not be indifferent and uninformed about what is happening on the other side of the world. I found that it was my duty, not only as a Greek American to care about these issues, but as a human I should be concerned about the issues of sovereignty and justice in every country; from the smallest island to the largest nation. Although I did not approach this trip through the experienced eyes of a well-versed political science major, I found that I was able to see these international affairs through the eyes of a social justice advocate.

Maybe part of me has a soft spot for Cyprus. I think they combine, in my mind, my Greek heritage with the American spirit. Having been a British colony from 1878 to 1960, when they fought for freedom in hopes of reuniting with Greece. Although they ultimately became independent instead of a Greek island, they fought with a resistance movement and propaganda similar to that of the American Revolution. They formed a democracy and became self-sufficient, similar to the U.S. To have the opportunity to become a fully-fledged, stable democracy, a NATO member (Turkey will never let them join with it veto power), and a helpful ally to the west in the Middle East, robbed from them only fourteen years after their independence is tragic and against U.S. law and international law. This could’ve easily have been the United States’ story.

But the real issue that matters to me, as a psychology major, a Greek American whose family escaped a Turkish genocide, an American citizen, and a human being, is the issue of the Missing in Cyprus. Following Turkey’s invasions in 1974, when they illegally took forty percent of Cyprus’s land, over 1,600 people became lost in the chaos of the invasion. Turkey only released two injured soldiers as prisoners of war following the ceasefire, leading us to believe that all these citizens were killed during the attack, but a majority of the bodies have not been found. The government of Cyprus believes that the Turkish government has information relating to mass graves in their military files, of which they refuse to release. They also try to thwart attempts to recover bodies on the occupied side of the island and do not allow the Cypriot government to search military sites.

This is a violation international law and is morally despicable. To have killed so many innocent people and then to not release information on where they are located is beyond tragic. It leaves the families stuck and unable to move on from such a traumatic event. Cyprus is not in a position of power to make demands to Turkey. They are tiny nation with a small army and no NATO membership. It is time some of Cyprus’ European Union friends and other allies in stronger positions to face Turkey. Instead of politicizing your relationships with the two countries, someone should step up, do the ethical thing and help Cyprus. This shouldn’t be a political issue; this is about family, loss, and closure. Give that to the people of Cyprus. Cyprus needs this closure, they have endured occupations by every historical empire from Greece to Phoenicia to Britain, fought for their independence, only to have it taken from them and held over their heads for forty two years. Someone needs to fight like a Greek, or in this case, like a strong Cypriot who has withstood all this tragedy with grace and compassion.

You don’t have to be Greek American to care. You don’t have to know everything about international law to have an opinion. You just have to be a human who believes in rule of law, sovereignty, justice, and compassion. These are the values the U.S. was founded upon. If the citizens of the US believe in these values, they believe in the plight of Cyprus. And once we care, the world listens. So just imagine you were Cypriot, just for a moment. Do for them what we expect would be done for us.

Eleni M. Papageorge is a rising sophomore at the University of Virginia, in Charlottesville, Virginia. She is double majoring in Speech Pathology & Audiology and Psychology, and minoring in Deaf Studies. She participated in the eighth annual AHIF Foreign Policy College Student Trip to Greece and Cyprus sponsored by the American Hellenic Institute.