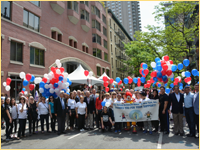 The Greek Division of the Ronald McDonald House New York, Chaired by Michael N. Bapis, a member of the Leadership 100 Board of Trustees, held its 21st Niki Sideris Annual Memorial Walk-a-Thon to raise funds for families fighting childhood cancer, on May 14, 2016.

Fr. John Vlahos, Dean of Holy Trinity Cathedral, gave the blessing. Greek Division Executive Committee Member Spiros Maliagros served as Master of Ceremonies. Bapis, Chairman since 2014, who is a partner and managing director of the Bapis Group at High Tower, spoke of the importance of supporting the “home away from home” for families fighting childhood cancer, noting that more than 10,000 Greek, Cypriot and Greek American families have received help through the efforts of the Greek Division of the Ronald McDonald House New York. Cathy Pappas, also a member of Leadership 100, and Presvytera Tina Vlahos co-chaired the Walk-a-Thon.

Founded by the late Niki Sideris in 1979 to aid Greek, Cypriot and Greek American families with children undergoing cancer treatment, the Greek Division of Ronald McDonald House New York is the only ethnic division of the charity and now helps children from all over the world to receive care and services needed in the battle against cancer

Participants in the 21st Niki Sideris Annual Memorial Walk-A-Thon of the Greek Division of the Ronald McDonald House New York.