Syriza’s election victory has renewed questions about the future of the eurozone and more precisely about whether Greece itself might leave – what has become known as Grexit.

Syriza itself is not even talking about it but it is being discussed elsewhere in the EU.

The euro is the single currency of all 19 members of the eurozone. So all disputes related to the Greek crisis must have their solutions within the framework of the euro, not outside it.

If the euro system cannot solve its problems through all the mechanisms that exist, then the system itself cannot survive.

And then there is the potentially huge cost to the eurozone, estimated at more than €1 trillion, according to a study by the Institute of International Finance. The European Central Bank and the big eurozone countries are most likely to baulk at that.

A second key question is whether Greece can pay off its enormous debt.

Greece’s public debt is €316.9bn (£237bn), as outlined by the outgoing finance minister. If we take into account that the country’s gross domestic product is around €187bn, then it seems clear that such public debt is not sustainable – especially as there has been little or no growth in recent years.

In the short term, eurozone mechanisms will prevent Greece from defaulting on its debt. But we do not know in advance the upper limits of all these new tools of European monetary integration and its long-term impact on a default crisis.

So these points are worth bearing in mind. 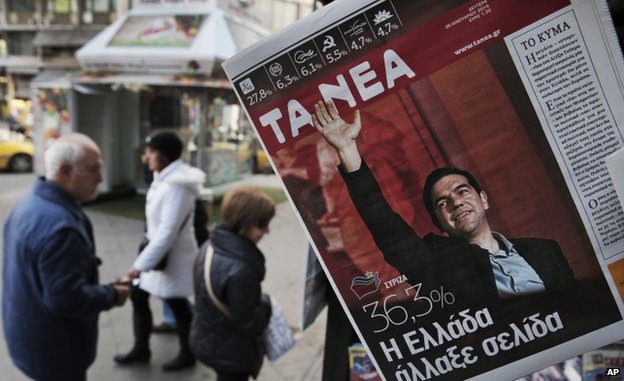 Right now, however, the challenge of debt repayment will be at the top of the new Syriza-led government’s agenda.

The aim of the new government is to renegotiate some of the terms and conditions of the €240bn bailout agreed with the so-called troika (the European Commission, European Central Bank and International Monetary Fund) since 2010.

Hans-Werner Sinn, the head of the German IFO institute, and other economists believe the troika’s austerity plan for Greece did not work out as planned.

Shortly before the election, he told Greek website Kathimerini that the bailout programme protected investors but aggravated the situation by creating a temptation to generate new debt.

He believes Greece should pull out of the euro, go back to the drachma which would then be devalued, and have some of its debts written off, a so-called haircut.

There has to be a revision of the debt programme, although many constraints make this procedure extremely difficult. 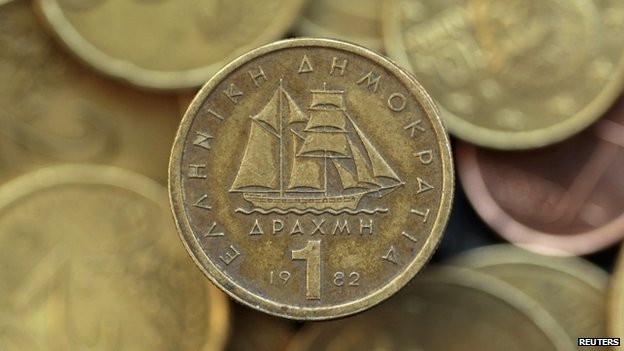 Greece abandoned the drachma in 2001, becoming the 12th member of the eurozone

The new government will see clearly, during the first days of its tenure, how these constraints may affect its “battle” strategy with Greece’s European partners.

A haircut would be the preferred solution. Almost three years ago, Greece negotiated a haircut in the form of a debt swap with its creditors, which helped lower the burden.

However, the biggest part of Greece’s debt consists of public loans, and this prevents Greece’s partners – or creditors – from accepting any haircut options.

One solution would be to extend the repayment time on the loans and cutting the interest rates on them.

Another possible solution could be linking the repayment of Greece’s debts to the value of its exports, in the same way that Germany paid off its debts after World War Two.