It’s Greek. It’s tasty, and it’s made in New Jersey

FM: We reject the unfounded and false claims of the Turkish foreign ministry

Dendias: Greece operates as a credible ally who respects and enforces the laws and rules of international order 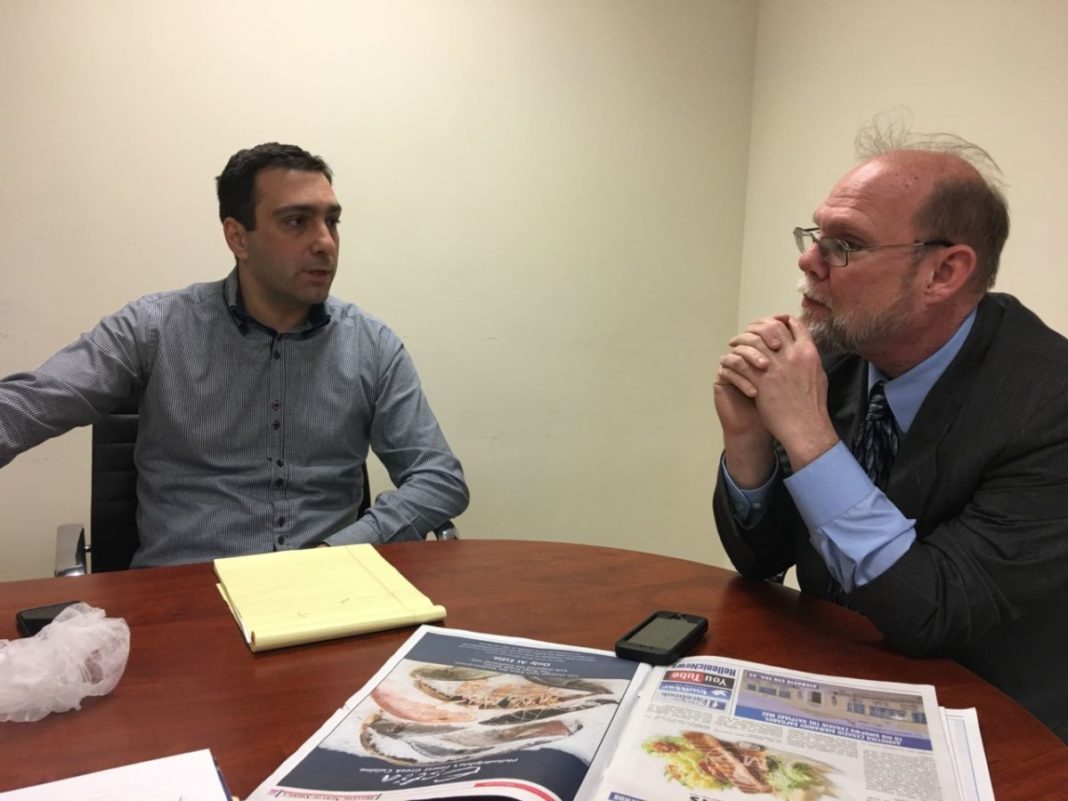 There’s a factory in New Jersey that’s turning out something fresh, delicious and authentically Greek.

Megas Yeeros, the number one producer of Yeeros in Greece and Europe, has been operating a factory in Lyndhurst, New Jersey since 2014, helping to bring its products to America.

The factory was built when Megas Yeeros realized there was an untapped market here in America for fresh and fast Greek food, capitalizing on a trend toward healthier Mediterranean diets.

Its two factories, the one in New Jersey and one five times bigger in Aspropyrgos, Greece, produce 35 tons of Yeeros a day, along with 10 tons of souvlaki and more than 10 tons of processed meat. Megas Yeeros distributes its product lines to restaurants and supermarkets on five continents, including countries and regions such as the United States, Canada, Panama and the Middle East.

With help from the New Jersey factory, the company has expanded beyond Yeeros to offer authentic Greek Souvlaki, Kebabs and Grillers. It also supplies one of Megas Yeeros’ newer ventures, GRK Fresh Greek, restaurants offering fresh Greek food in a more casual setting.

The first GRK Fresh Greek opened in 2012 in Manhattan and is similar to the business model used by Chipotle.

The initial goal was to see if a simple option like cheaper fresh quality Greek food could succeed in an expensive area like Manhattan, says Nikos Stergiou, general manager of the New Jersey facility.

“Very quickly we realized, ’yes’…so we make the decision to come here and invest in this market. The United States guys, they need a more healthy approach to Gyros so we came here and invested in this factory and we started operating,” Stergiou says.

The New Jersey factory began by offering three different kinds of Yeeros, preparing its products using Greek onions, spices and herbs, with no preservatives and no additives. The company then spent $500,000 in the summer of 2015 to install new equipment at the New Jersey factory so now it can offer 25 different products, including kabobs, souvlaki and even items for the Mexican food market.

Megas Yeeros already had a proven track record when it opened its factory in New Jersey.

“It was started in 2007 and we became one of the most successful companies in Greece,” Stergiou says.

So what’s the secret to their success? It starts with fresh ingredients, high standards of quality and authentic Yeeros with their own original Greek recipe.

“Our company prides ourselves in taking authentic Greek food and reinventing it in innovative ways,” states the Megas Yeeros website.

Then there’s this.  “Our company marinades meat solely with the simplest of ingredients, for the moist, delicious taste that we are famous for internationally: Extra Virgin Olive Oil, Pure and Natural Greek Honey, Fresh Greek Yogurt and the Finest Quality Fresh Herbs,” states the company website.

And those meats (lamb, pork, beef and chicken) are gluten free with no MSGs.

Megas Yeeros was founded in Greece on the idea that you could take an enormously popular food like the Yeero and produce it at an industrial level. That idea culminated in the 2007 opening of the 10,000 square-meter factory in the Aspropyrgos area in Attica. It is one of the most ergonomic factories in Greece, using ultra-modern machinery to produce “innovative products and to minimize human fault,” according to the company website.

Megas Yeeros has created strategic collaborations with well-established fast food chains, distributors and diners which have sent its products from Canada to Panama and across to California. The company distributes in the United States, the United Kingdom, Germany, Cuprus, Greece, Austria, Sweden, Estonia, Italy, Belgium, Netherlands, Poland, Romania, Bulgaria, France, Spain and Dubai.

The New Jersey factory, housed in a building where sausage casings were once produced, handles meat product preparation. It’s a single level USDA-approved plant set up to prevent any cross contamination from products or personnel.

“We preferred to build everything from scratch so we demolished everything,” Stergiou says.

The Lyndhurst “state of the art” factory is 5,000 square meters built with an investment that surpassed 4 million Euros (about $4,200,000).  Establishing the new factory in the United States was part of the broader dream and vision of Megas Yeeros to make the brand global, according to the company website.

Yeeros (a Greek word meaning ‘spinning’) are enormously popular in Greece. A less authentic version of it has found its way to the United States, renamed the Gyro.

“Here, they name it Gyro, but it is a product that contains 65 percent frozen material, some binding, some other stuff inside. We want to differentiate our sense of the product from the beginning…” Stergiou says.

A genuine Yeero must always be fresh and the customer must be able to see what he or she is eating. They can choose different kinds of marinated meat fillings, add it in a salad, add it in pita bread, with some Tzatziki sauce and “he can have a very, very healthy meal, lunch or whatever,” Stergiou says.

Megas Yeeros founder George Nikas was inspired by the popularity of the Yeero in Greece and realized the time was ripe to introduce the authentic Greek Yeero to the United States. And so was born GRK Fresh Greek.

“What Chipolte does for the Mexican cuisine, Mr. Nikas wants to have it for the Greek cuisine so he invested and established the GRK business,” Stergiou says.

The GRK Fresh Greek website promotion says it all.

Food is made to order and customers can walk in and customize their meals. Customers choose their Yeero filling, thinly sliced marinated lamb, beef, chicken, pork or portabella –served in a warm pita or on a plate with salad, brown rice or Aegean slaw.

Megas Yeeros is poised to take off further as they welcome new investors to their kind of business.

“I think now they know they have the right product and the market is definitely here,” Stergiou says.

In the first year, Megas Yeeros had five distributors in the United States. Now there are 15 to 20 distributors all over the nation.

“We are trying with our friends to reach the big guys–BFG, Sysco, U.S. Foods. They started to open their doors to us for our products with new categories, with a new product line that we have,” he says.  “Now I think we have the products, the product line and we can continue our success in the United States.”

When inaugurated in 2007, the company reported sales of $2.1 million, which have been increasing at an annual growth of 45 percent, reported Megas Yeeros export manager Maria Maggana in a YouTube video.   By the end of 2014, the company reached record sales of $21.2 million. In the European export market, the company has increased its sales over the past two years by 58 percent, she states, and in countries such as Germany and the UK, sales increased by 142 percent.

Consistent quality continues to be the company’s mantra.

“The most important part is the quality. We raise the bar, we believe in consistency as well as the quality. That is very, very important to us,” Stergiou says. “We have the same vendors that we started with back in 2007. We stay with the things that we believe we need for our product.

“In this business if you change things—small changes can make a big difference, so we stay with the vendors, the corporations that we had back in 2007.

“We are looking for win-win operations. This was important in Greece and I think it’s important in the United States as well,” he says.

(April 26-2017)  Sokratis Ballas, business development manager, was exhibiting at the 2017 Hermes Expo for Megas Yeeros, a world-wide producer and distributor of authentic Greek Yeeros and other ethnic food products. He described the Expo succinctly as “good people, good food, good company.” Megas Yeeros is hoping to educate restaurant retailers and distributors on the innovative food products they are now offering. “Awareness and education is what we’re trying to accomplish,” he said. The Yeero is the number one food trend in the world and now the company is developing a strong presence in America as more Americans embrace Mediterranean foods. 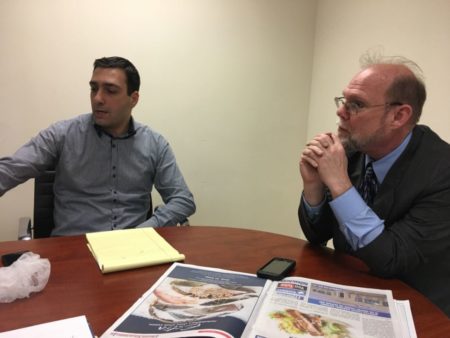 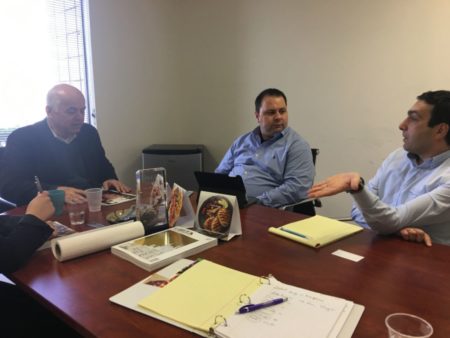