Hanac Honors Peter Vlachos As “Man Of The Year” At Gala 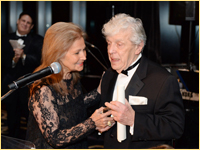 Peter A. Vlachos, an innovator and leader for more than 50 years in the financial industry and long-time member of Leadership 100 who has served on its Board of Trustees and chaired its Investment Committee for almost two decades, was honored as HANAC’S “Man of the Year” at HANAC’S GALA 2014 on October 24, 2014, at The Mandarin Oriental in New York City.

The event drew some 300 supporters and guests from a cross section of the Greek American Community, New York City businesses and social service organizations, and friends from around the country. Evangeline Douris, Chairman of HANAC, opened the program, and recalled the special relationship Vlachos enjoyed with her late husband, George T. Douris, the Founder of HANAC, as well as his 21 years as a member of HANAC’s Board of Directors.

Vlachos was introduced by George S. Tsandikos, Chairman of Leadership 100, who summarized his life story and contributions to the Greek Orthodox Church and Greek American community, crediting him and his Investment Committee with successfully doubling the Leadership 100 portfolio.

Vlachos gave a highly personal speech about his struggles growing up in New York City, his service in the Air Force during the Korean War and his dedication to philanthropy and its future prospects in a challenging economy, also recalling his friendship with the late George T. Douris.

He was presented with a crystal triangle honoring him as HANAC 2014 Man of the Year by Evangeline Douris and was also presented with proclamations for his service from The Assembly and The Senate of the State of New York.

Vlachos began his professional career with the Wall Street firm of Amott Baker, joining the Dreyfus Corporation in 1967, where he became portfolio manager and then the President of the Dreyfus Leverage Fund. In 1980, he joined Neuberger Berman as an investment advisor.

Currently a Managing Director of Beck, Mack & Oliver LLC, an 83-year-old New York investment advisory firm, Vlachos founded Austin Investment Management, Inc. in 1989, which was purchased by the former entity in 2009. During his time as President of Austin, he also served as a corporate board member of Bullhorn, Inc. and VirtualRelocation.com, two innovative technology companies.

A native New Yorker, he attended the prestigious Stuyvesant High School. Vlachos graduated from Colby College in Waterville, Maine in 1958, after serving in the 93rd Bomb Wing of the Air Force Strategic Air command and flying with the 328th Bomb Squadron as a radar bombing and navigational technician during the Korean War.

A lifelong supporter of the arts, religious, environmental and humanitarian causes and education, Vlachos has served on the boards and investment committees of Colby College, Outward Bound, Scenic Hudson, Metropolitan Montessori School, and The School for Strings. He has served on the Archdiocesan Council of the Greek Orthodox Archdiocese of America, as well as being Treasurer of Faith: An Endowment for Orthodoxy & Hellenism, Vice President of the American Associates of the Saint Catherine Foundation, and an Archon of the Ecumenical Patriarchate. He served on the Board of directors of HANAC, Inc. for more than two decades.

Vlachos is a resident of New York City and Martha’s Vineyard with his wife, Dr. Susan Deakins. The couple has one daughter, Zoe Vlachos Young Yang, also a member of Leadership 100, a son, Dimitri Vlachos, three granddaughters and one grandson.

HANAC was the first social service organization dedicated to serving the needs of the Greek immigrant community. Founded in 1972, it now provides a vast array of services to more than 30,000 individuals from underserved communities throughout New York City, ranging from after-school and youth employment programs to family counseling and substance abuse programs, from legal services for immigrants to adult literacy program, and from senior centers and transportation services to three affordable senior housing residences with 350 apartments.