by Nick Christophers It has been with no doubt an adventure for the growing star of Despina Mirou who has lit up the screen and...
Read more
Church 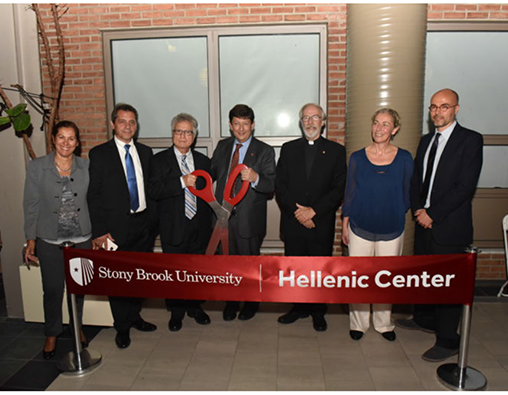 There was a dedication and ribbon cutting ceremony Oct. 18, 2017, 5:30 p.m., at Stony Brook University for its Center for Hellenic Studies. The grand opening dedication celebrated Hellenic history, education and culture through the new center, which has been in the planning stages since 2009.

“I am excited and aware that we have come a long way from where we started in 2009,” said Dr. Stella Tsirka, acting director for the Center. Dr. Tsirka is president of the AFGLC of New York and also serves as professor of Pharmacological Sciences in the School of Medicine at Stony Brook. She is also Vice Provost for Faculty Affairs at the university.

The dedication is an indication that the Center for Hellenic Studies is now a permanent fixture at Stony Brook.

“It shows to our students, faculty and community that we are here to stay, that we will continue with new zeal and determination our efforts to promote Hellenic culture, to showcase the excellence of Hellenic literature and language, to explain the relevance of studying Hellenism from ancient times to now,” she said.

In 2009, Peter Tsantes and Kalliope Gemelas approached Dr. Tsirka with the idea of using the resources of the AFGLC to create an endowed chair in Hellenic Studies at Stony Brook. They found support from Jane MacArthur in the College of Arts and Sciences Advancement office. A public support and fundraising campaign began with efforts from Dr Vassilis Danginis, Betty Turner, Anna Grekusis, Evangelia Stamatiadis, Michael Nicodemou and Kalliope Valentine, described by Dr. Tsirka as “a group of amazing and dedicated volunteers.”

They organized musical events, hosted lectures, brought documentaries and movies, danced, cooked and baked and wrote tons of letters requesting support for the establishment of the Hellenic endowment.

The Tsantes endowed Professorship in Hellenic Literature and Language was created, helped by the generous contributions of Peter Tsantes. “He is the most generous, the most passionate, the most dedicated Greek I know!” Dr. Tsirka said enthusiastically. Building on his contributions were donations from volunteers and members of the neighboring Greek community. 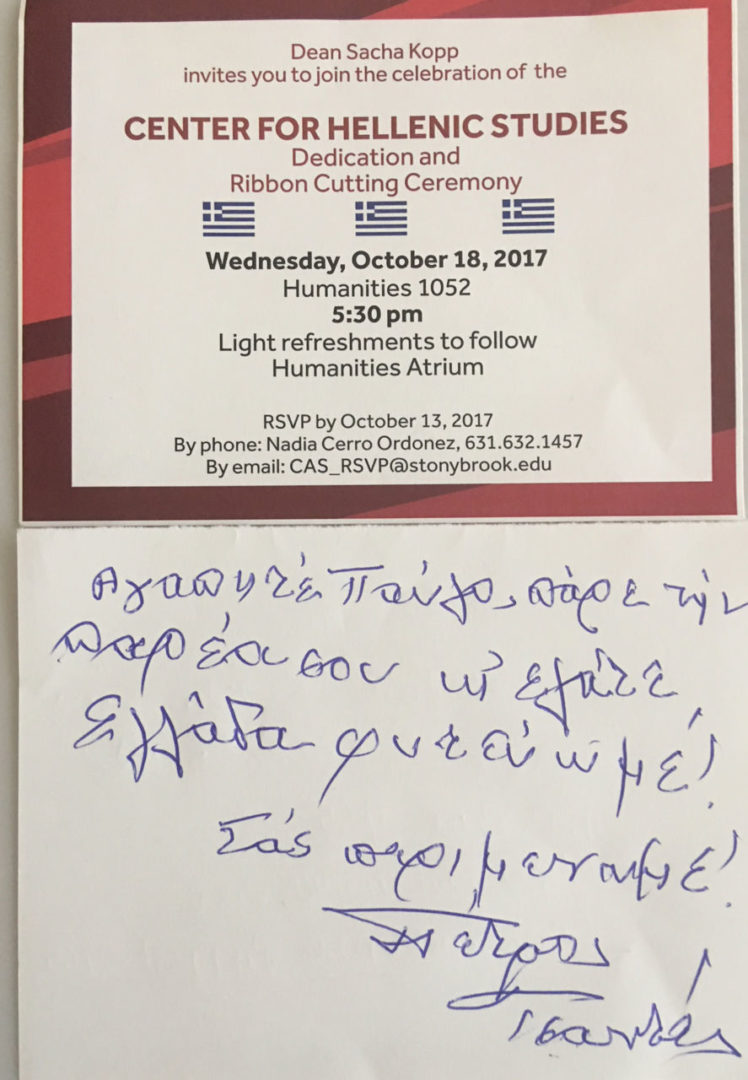 The Professorship at Stony Brook is held by Prof. Nikos Panou, who established Modern Greek Language classes at all levels, and inaugurated a minor in Hellenic Studies.

The dedication was hosted by Sacha Kopp, Dean of the College of Arts and Sciences. The speakers included Dean Kopp, Peter Tsantes, Prof. Panou and Dr. Tsirka. Members of the SBU Greek and Cypriot Student Association danced traditional dances and sang Greek songs.

The Center, operating formally since 2014, will be hosted in the Humanities 1502 room. It will be used for lectures and as a classroom for students to learn and study Greek. The SBU Greek and Cypriot Student Association will also meet there to plan their events and activities.

The hope now is to expand the endowed professorships at Stony Brook relevant to Hellenism to include the social sciences and to serve as a hub of scholarly exchange in Hellenic and Greek American studies in the United States, with Greece and the rest of the world. Eventually, the goal is to establish a graduate program there in Hellenic studies.

Meanwhile, fundraising continues for the Center. About $1.5 million is needed to fully establish the Center, Dr. Tsirka said. Funds are also needed to add endowed professorships to “frame and lead the work and scholarship of the Center,” she said. Fundraising will continue locally in the community near Long Island, and at the state and national level.

“We need to keep applying for grants to different foundations to support these aspirations and be successful in obtaining them,” she said.

More and more university students, of Greek American descent, but also from other ethnic groups, are taking the modern Greek language classes and participating in the summer abroad in Greece program.

“We are organizing many events every year inviting and hosting both SBU faculty, students and staff, and members of the community who come for the lectures, the music, the movies,” Dr. Tsirka said.