Hellenic News of America is a Proud Supporter of the Presentation of “Clytemnestra or the Crime” at St. Demetrios Greek Orthodox Church in Upper Darby, PA 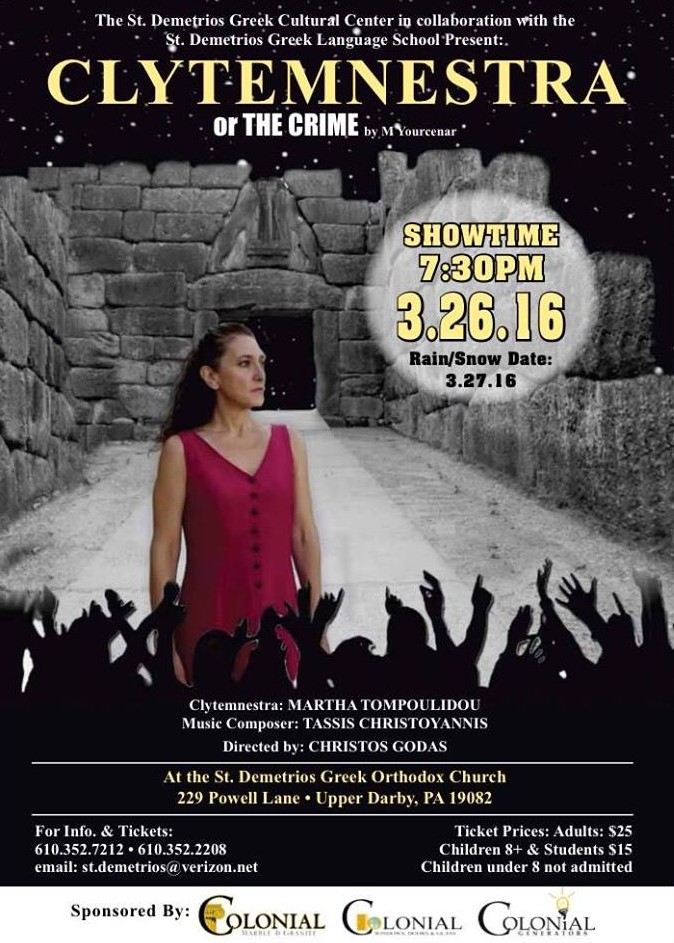 YOU ASK WHO IS CLYTEMNESTRA?
Clytemnestra, in Greek legend, a daughter of Leda and Tyndareus and wife of Agamemnon, commander of the Greek forces in the Trojan War. She took Aegisthus as her lover while Agamemnon was away at war. Upon his return, Clytemnestra and Aegisthus murdered Agamemnon. Clytemnestra was then killed by her son, Orestes, with the help of his sister Electa, in revenge for his father’s murder.
Come enjoy this play and enlighten your interest in Greek mythology as Clytemnestra unfolds her passion, drive, and reasoning for her actions.
3/26/16 @ ST. DEMETRIOS CHURCH UPPER DARBY @ 7:30PM
TICKETS: $25 ADULTS / $15 CHILDREN 8+ & STUDENTS

Previous article
$20,000 in Scholarship Awards Will Be Awarded to Greek-American High School and Undergraduate Students at the 25th Hermes Expo Awards Dinner on Tuesday, April 5, 2016, at the Concordville Inn
Next article
Hermes Expo Announces Schedule of Events for April 5, 2016