CommunityIvan Aivazovsky Lecture at Armenian Church of the Holy Martyrs Presented by...
CommunityGreeceCulture 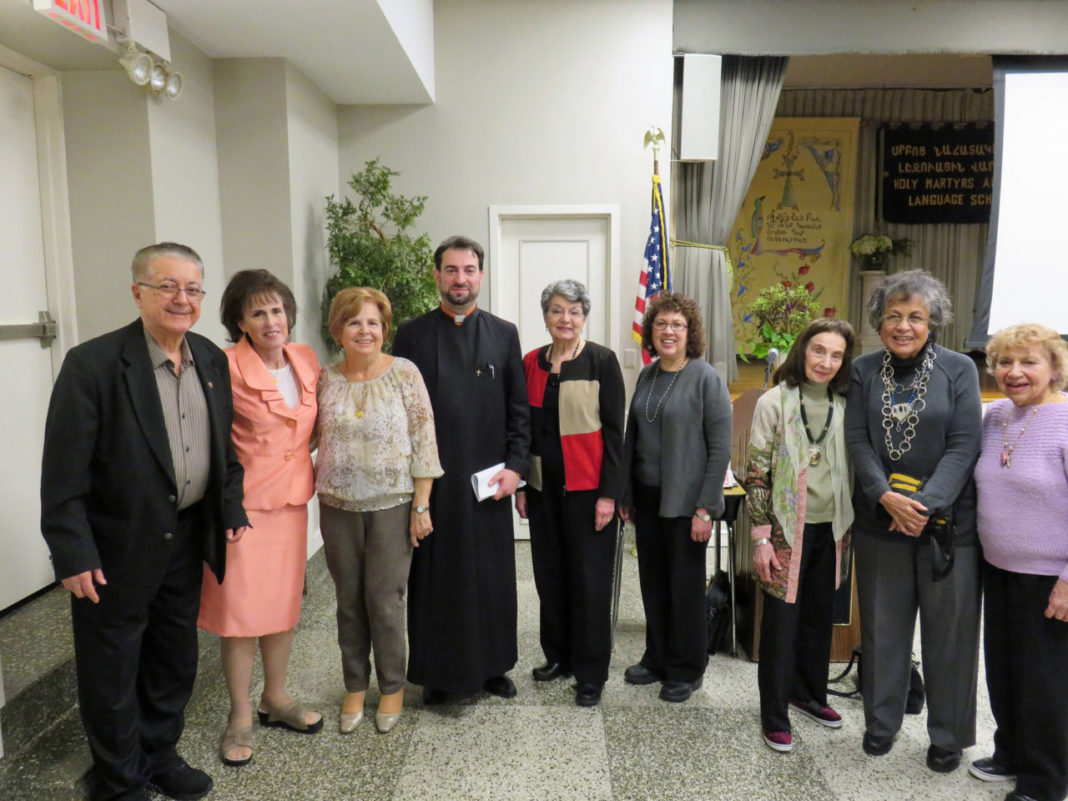 “Ivan Aivazovsky: Remembering Armenia and the Eastern Roman Byzantine Heritage” PowerPoint program was presented by Prof. Catherine Tsounis on Wednesday, April 24th, at 1:15 p.m. to a filled church auditorium of the Women’s Guild of the Armenian Church of the Holy Martyrs in Bayside, New York. “Thank you so much for sharing your knowledge with us,” said the leaders of the Women’s Guild to the speaker. “It’s always wonderful to expand one’s horizons. You have enabled us to do that today.” Father Abraham Malhasyan is the pastor. Co-Chairs were Zarmi Megherian and Carol Loshigian. The program co-ordinator was Carol Anastasian. 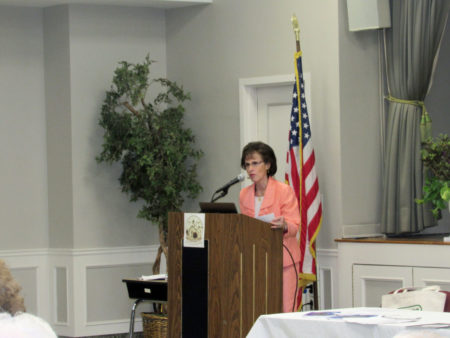 “Our speaker has a Master of Arts degree in Byzantine history from Queens College,”  said Carol Anastasian in her introduction of the speaker. “She is a journalist, educator, writer of Greek language and culture. A photojournalist from 1974 in internet, magazine and newspaper mediums, Prof. Tsounis was inducted into “Who’s Who Among America’s teachers in 2002 and 2005. She had outstanding contributions to the New York City and the Greek community. She wrote many books of Greek American Experience and is active at St. Nicholas Greek Orthodox Church, Flushing, NY. Prof. Tsounis will present an in look of the Armenian-Russian artist who produced 6,000 works.”

“Continuous effort – not strength or intelligence- is the key to unlocking our potential -Winston Churchill. This describes Ivan Aivazovsky, a man educated in Byzantine history that combined this knowledge as an Armenian-Russian painter of the Late Russian empire,” explained Prof. Catherine Tsounis. “Two years in the Tretyakov Gallery, Moscow, I saw paintings of the sea and Constantinople of an artist with a name beginning with ai, a Byzantine root. When I came back to the United States, I discovered he was the greatest Russian artist and one of the greatest marine artists in history, who promoted the Greek revolution in his paintings. He was baptized Hovhannes Aivazian of an Armenian family in the Black Sea port of Feodosia in the Crimea. His brother was the Armenian Catholic bishop Gabriel Aivazian.”

The speaker showed 60 slides of his work, ranging from the sea, Constantinople, Greek battle scenes, Greece, Crete and the Crimea. His art is on stamps of Central Africa, Burundi, Moldova, Romania, Russia and European countries. They hang in private collections, Armenia, Russia the USA and Europe.

“Ivan Aivazovsky’s childhood was spent in poverty on the outskirts of the city facing the beautiful Feodosia Bay and the ruins of an ancient Greek fortress,” she explained.  Young Ivan was mesmerized by the grandeur of the view and the heroic stories told about the Greeks and the famous battles of the past. This love of Greece and Constantinople are prevalent in his art.”

The speaker showed his painting of Lord Byron meeting the Armenian monks at San Lazzaro island in Venice. “Lord Byron published the first English/Armenian dictionary, before he left for Greece to fight in their revolution,” she said.

“An oil painting of the Brig Mercury Attacked by Two Turkish Ships, 1892, showed he knew the sea and loved it. He developed a unique way of capturing its changing moods. Instead of copying directly from nature, he limited himself to pencil sketches. Coupled with his most important gift, an amazing visual memory, this enabled him to reproduce states of nature. He was appointed the main painter of the Russian Navy. Aivazovsky had close ties with the military and political elite of the Russian Empire and often attended military maneuvers. He was sponsored by the state and was well-regarded during his lifetime.

‘The Battle of Navarino’ is shown in Greek textbooks, newspapers and websites. Aivazovsky painted the decisive battle that Gave Greece its Independence. Scholars told me this Russian drew paintings showing Greek naval battles. I saw this oil painting in a book by the Museum of the Macedonian Struggle. He was awarded numerous medals by the Greek government.”

Prof. Tsounis displayed a slide of  “A Panorama of Constantinople, 1856 that shows the love of one of the greatest cities of history, coveted by the Russian empire for centuries. The sun shining gave the viewer a positive impression. He died in 1900 as his beloved country was being torn apart. He was buried at the courtyard of St. Sargis Armenian Church. A classical Armenian saying is engraved on his tombstone which translates: “He was born a mortal, left an immortal legacy”.

The speaker continued saying that “Mardo and Carol Anastasian inspired this information on the Armenian contribution to the Byzantine Empire. Dr. Peter Charanis of Rudgers University said the important role played in the history of Byzantium by that talented minority, the Armenians, has been generally unrecognized. Dr. Charanis, Greek-American Byzantine scholar and immigrant from Lemnos, Greece, was associated with the Dumbarton Oaks research library.  He believed these people (Armenians) appear, of course, were thoroughly Hellenized. ..Yet it may be asked whether their Hellenization was not unaffected by their original background, whether in being absorbed they did not modify the culture which absorbed them.

For something like five hundred years, Armenians played an important role in the political, military and administrative life of the Byzantine Empire. They served as soldiers and officers, as administrators and emperors. In the early part of this period during the seventh and eighth centuries, when the empire was fighting for its very existence, they contributed greatly in turning back its enemies. But particularly great was their role in the ninth and tenth centuries when as soldiers and officers, administrators and emperors they dominated the social, military and political life of the empire and were largely responsible for its greatness.

So dominant indeed was their role during this period that one may refer to the Byzantine empire of these two centuries as Graeco-Armenian; ‘Graeco’, because as always, its civilization was Greek, ‘Armenian’, because the element which directed its destinies and provided the greater part of the forces for its defense was largely Armenian or of Armenian origin. It was a role, moreover, of world-wide historical significance for it was during this period that the empire achieved its greatest success, when its armies triumphed everywhere, its missionaries spread the gospel and with-it civilization among the southeastern Slavs, and its scholars resurrected Greek antiquity, thus making possible the preservation of its literature.

Herein lies perhaps the most important part of the legacy of the Armenians to civilization. But while all this may be true, the point should be made and made with emphasis that the Armenians in Byzantium who furnished it with its leadership were thoroughly integrated into its political and military life, identified themselves with its interest and adopted the principal features of its culture. In brief, like many other elements of different racial origins, as, for instance, Saracens, Slavs and Turks, who had a similar experience, they became Byzantines.”1 One face, one race. Ivan Aivazovsky knew this and incorporated themes, looking toward the civilization of Constantinople.

“The starting date of the Armenian Genocide is conventionally held to be 24 April 1915, the day that Ottoman authorities rounded up, arrested, and deported from Constantinople (now Istanbul) to the region of Ankara 235 to 270 Armenian intellectuals and community leaders, the majority of whom were eventually murdered. The cleansing continued during and after World War I resulting in the massacre of millions of Armenians, Greeks and Assyrians of Anatolia.

On April 24, 1919, prominent figures of the Armenian community that had survived held a commemoration ceremony at the St. Trinity Armenian church in Istanbul. Following its initial commemoration in 1919, the date became the annual day of remembrance for the Armenian Genocide.

Yet, ever since the horrific events of 1915, Turkey is methodically denying the Armenian genocide. But despite Turkish denials, it is unanimously verified by the International Association of Genocide Scholars and accepted by nations that uphold moral responsibility above political purposes.”2