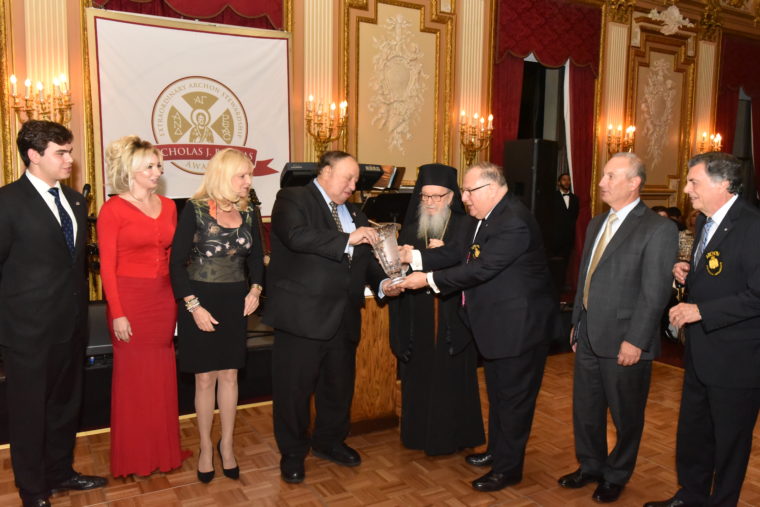 The Order of Saint Andrew the Apostle honored Archon John A. Catsimatidis, entrepreneur, philanthropist, and Chairman of the Red Apple Group, with the 2017 Nicholas J. Bouras Award for Extraordinary Archon Stewardship on October 20, 2017 at the Metropolitan Club in New York.

Catsimatidis’ children, Andrea and John Jr., introduced their father with a moving tribute. He thanked them along with his wife, Margo, and said he accepted the Award because it is in honor of the memory of his very good friend Nicholas Bouras. His Eminence Archbishop Demetrios, Geron of America and Archon National Commander Dr. Anthony Limberakis presented the Award.

The event was part of the Annual Archon weekend and was attended by former White House Chief of Staff Reince Priebus and other dignitaries, along with some 200 members of the Order and their families.

John Metaxas, Master of Ceremonies, spoke on Bouras’ and Catsimatidis’ lives and work. George Safiol, who headed the Organizing Committee, spoke about Catsimatidis’ philanthropy and business and political activities and achievements.

The prestigious Award is named in recognition of the extraordinary service exemplified by National Vice Commander Bouras of Blessed Memory, who demonstrated remarkable leadership as a faithful son of the Ecumenical Patriarchate and exemplary steward of the Greek Orthodox Archdiocese of America. Past recipients of the Award have included George D. Behrakis (2011), James C. Fountas and John Halecky, Jr. (2012), Stephen J. Yallourakis, M.D., D.D.S. (2013), Christopher Stratakis, Esq. (2014), the Hon. Nicholas Tsoucalas (2015) and Theofanis V. Economidis (2016).

The Red Apple Group has evolved into a diversified corporation that has holdings in the energy, aviation, retail and real estate sectors and over 8,000 employees, with approximately 2,000 locations in New York City.

Catsimatidis, together with his wife, Margo, is noted for his community involvement and philanthropy. He has been a strong supporter of the Police Athletic League for nearly 30 years. He serves on the Board of Columbia Presbyterian Hospital, the Hellenic Times Scholarship Fund, and over the years served in a variety of volunteer positions in the Greek Orthodox Archdiocese, including Vice Chairman of the Archdiocesan Council, Board and a founder of Faith Endowment.