Washington, DC, November 6, 2015 — Astronaut, Senator and American hero, John Glenn, and the husband of Queen Elizabeth, Prince Philip, H.R.H. The Duke of Edinburgh, joined other world leaders lauding the people of Greece in their courageous fight against Hitler’s Axis Forces and the Holocaust and celebrating those who today exhibit the same kind of Oxi Day valor.  This was all part of the Washington Oxi Day Foundation‘s Fifth Annual Celebration on October 28, the 75th anniversary of that historic moment that changed the trajectory of the Second World War. 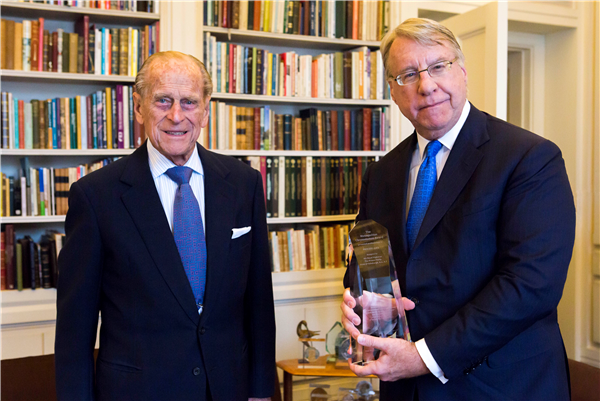 Jim Chanos presents H.R.H. The Duke of Edinburgh with the 2015Metropolitan Chrysostomos Award at Buckingham Palace 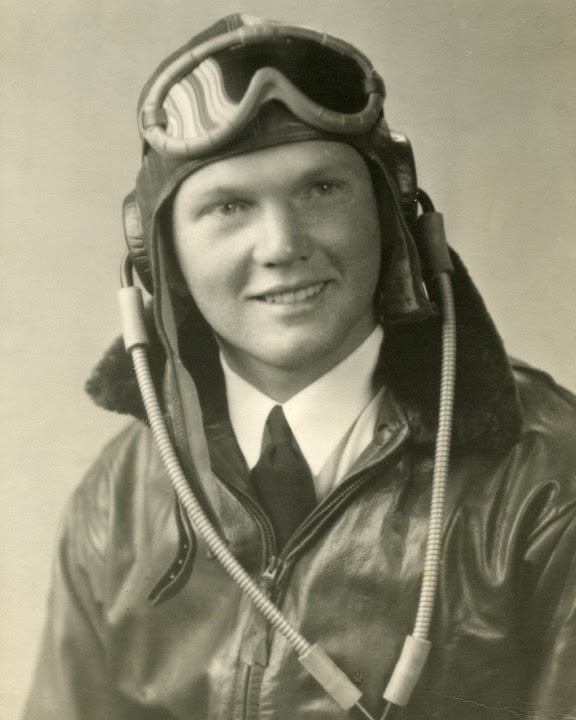 Khalil al-Dakhi, who risks his life daily rescuing women and children held captive by ISIS as sex slaves, was the recipient of the 2015 Oxi Day Award.  His introduction, featuring video clips from the nationally televised FRONTLINE program that followed him on the ground in Iraq, brought a prolonged standing ovation from an audience filled with many high-level US government officials. 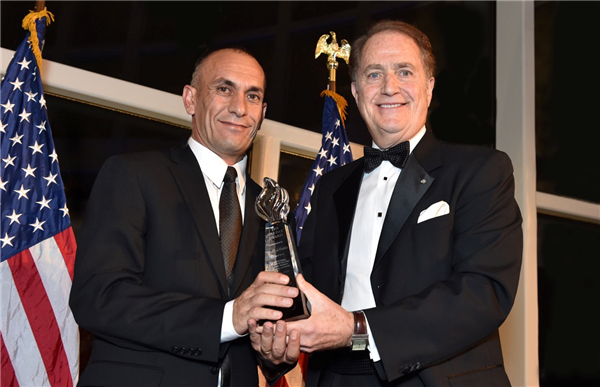 Khalil al-Dakhi receives the 2015 Oxi Day Award from Washington Oxi Day Foundation Founder and President Andy Manatos
The world-renowned musician and humanitarian Bono, who issued impassioned pleas at his concerts for the release of 2015 Battle of Crete Award recipient Leyla Yunus, spoke at the Oxi Day gala via video about the plight of the human rights advocate who remains imprisoned in Azerbaijan.  Ms. Yunus’ daughter, Dinara, who was introduced by the highest-ranking woman in American history, Nancy Pelosi, accepted the Award on her mother’s behalf and further detailed her fight for justice.
Thanks for reading Hellenic News of America
Subscribe to HNA 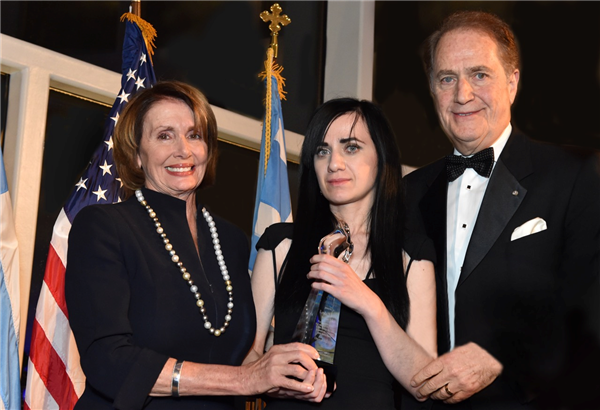 During their time in DC, the Washington Oxi Day Foundation also brought Khalil al-Dakhi and Dinara Yunus, two exemplars of the Oxi Day spirit today, together with senior US government officials.  These meetings are adjusting US policy and helping their efforts.

Princess Alice, the mother of Prince Philip, was awarded posthumously with the 2015 Metropolitan Chrysostomos Award.  President and Founder of Kynikos Associates LP and Washington Oxi Day Foundation Advisory Board Member, Jim Chanos, spoke at the gala about his presentation of the Award to Prince Philip at Buckingham Palace days before the celebration.  Princess Alice saved a Jewish family and other members of the Jewish community from Hitler’s concentration camps during the Holocaust. Remarkably, she lived across the street from Gestapo headquarters in Nazi-occupied Athens, Greece.

Also presented at the October 28 gala was the Second Annual Stavros Niarchos Foundation Philotimo Award.  Given to an individual or organization in Greece, this Award recognizes extraordinary acts ofphilotimo that have helped society keep its cohesion during Greece’s current socio-economic crisis.  Stavros Niarchos Foundation Executive Board Member, Ambassador Vassilis Kaskarelis and Director of Programs and Strategic Initiatives, Stelios Vasilakis, presented the Award to PRAKSIS and ChairmanTzanetos Antypas.  PRAKSIS (Programs Of Development, Social Support And Medical Cooperation) is an independent Non-Governmental Organization in Greece whose main mission is the design, application and implementation of humanitarian programs and medical interventions. 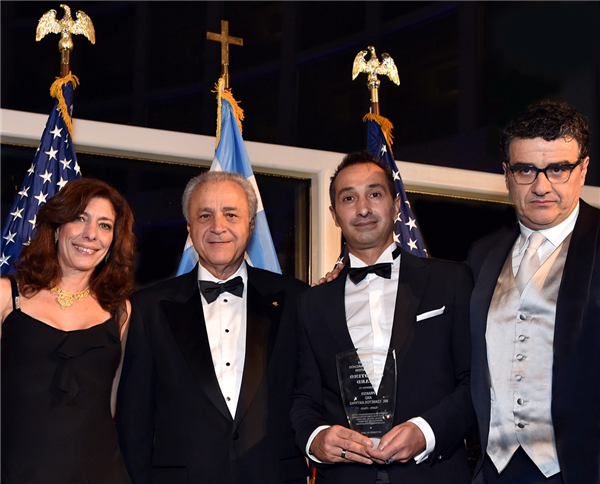 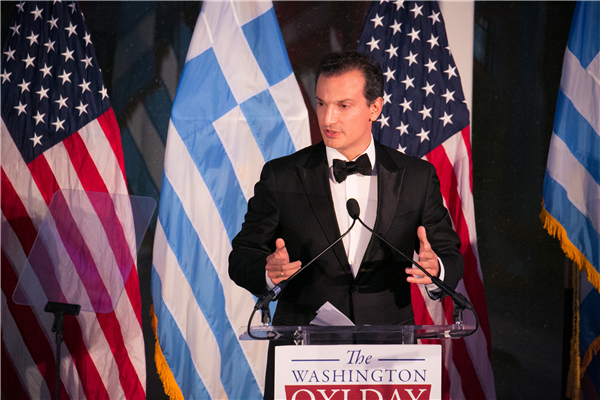 The 2015 Greatest Generation Awards honored three distinguished World War II veterans — Greek-AmericanJames Moshovitis, Greek General George Douratsosand American John Glenn.  Senator Glenn, who was unable to travel to Washington for the occasion, was introduced by his personal friend of many years Bill Hunter.  Astronaut and head of NASA, AdministratorCharles Bolden, accepted the Award on Glenn’s behalf.  Accepting the Award posthumously on behalf of General Douratsos was his niece Themis Douratsou-Paleologou.  In addition, the keynote address was delivered by Co-Founder and Co-Managing Partner of KPS Capital Partners, LP,Michael Psaros. 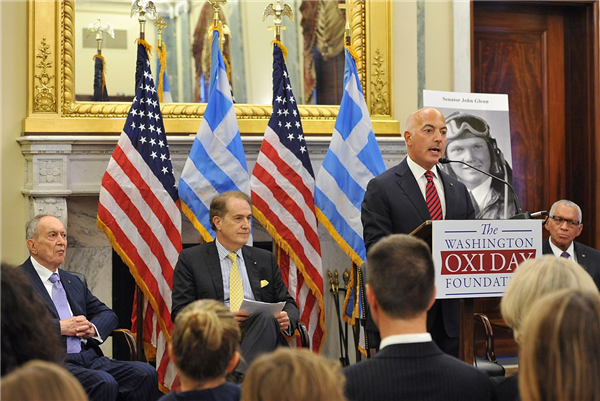 These leaders joined in the advocacy of Oxi Day courage sounded over the first four years of the Oxi Day Foundation by leaders including:

The 75th anniversary celebration began in Washington, DC with a reception at the residence of the Ambassador of Greece to the US, His Excellency Christos Panagopoulos, co-hosted by the National Hellenic Society (NHS).  Guests made a champagne toast at the exact moment 75 years ago that the Prime Minister of Greece said “OXI!” Previous articleDCVMA Board Members and Friends of the Delco Veterans Memorial   RIDE with or IN SUPPORT OF A VETERAN/s IN YOUR LIFE !!!
Next articleAHEPA Commemorates the 75th Anniversary of OXI DAY at Liberty State Park, NJ [ Full Video – Interviews – Photos ]