Living the Dream: Aurelia’s Odysseys IFWTWA Annual Conference in California: A Moveable Feast By Aurelia, Special to the Hellenic News of America

Sarbanes Leads House Effort to Pass H.R. 1, the For the People Act

By Leonidas Chrysanthopoulos, Ambassador at honorem, IHA Member   The Lausanne Peace Treaty with Turkey, the Agreement between Italy and Turkey of January 4, 1932, the...
Read more
In Greek 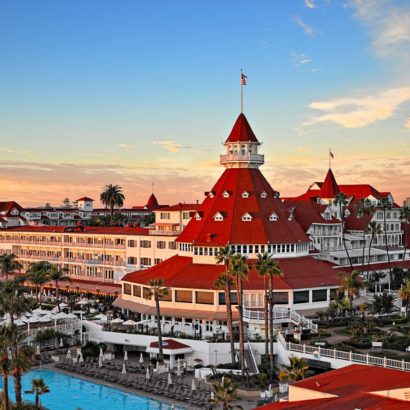 By Aurelia, Special to the Hellenic News of America

When the highly anticipated program book with the agenda for my professional travel writers’ conference arrived, I eagerly read the offerings once, then once again.  After reviewing the planned events, including a presentation by a panel of renowned chefs, spa visits, fine dining, and an evening ending with S’mores on the Beach at sunset, I knew that the gods had smiled upon me.

Not only was the International Food Wine and Travel Writers Association (IFWTWA) having its 2016 conference in California’s spectacularly beautiful Coronado Bay area, but events would be held in not one, not two, but three of the area’s five star resorts.  It promised to be a moveable feast.

Conference organizers chose the Loews Coronado Bay Resort, nestled between a sandy beach and the San Diego Bay, for our headquarters.  My room was luxurious and spacious with a walk in shower, huge tub for soaking, and a patio overlooking the outdoor pool.  To ensure a complete conference experience of the one mile wide and ten mile wide bay area, activities were scheduled at the  nearby Marriott Resort and Spa, the iconic Del Coronado, and The Marine Room and George’s at the Cove.  A two hour “Old Town Trolley Tour” of downtown San Diego took us through the business district, the park with seventeen museums, and the San Diego Zoo.

As a person who has lived on the East Coast all of her life, I knew that an enchanting experience awaited me.  And…I began counting the days until I crossed the bridge from East to West Coast, literally stepping into a new world.

A guide book describes Coronado as “a small beach community with an island feel, surrounded by the San Diego Bay and Pacific Ocean.”  It is a perfect description for this world-famous resort area, and, as the guidebook points out, it has been visited by “presidents and kings, movie moguls, Hollywood stars and visitors from every part of the world.”  The movie, Some Like it Hot, with Marilyn Monroe, Tony Curtis, and Jack Lemmon, was shot at the Del Coronado.

It was thrilling to be in the presence of culinary royalty and hear these personal men (and one woman) discuss their art.

LOEWS CORONADO BAY RESORT.  Surrounded by the Pacific Ocean and Coronado Bay, our resort headquarters, was recently named by USA Today as one of the Ten Best Resorts in San Diego. It stretches over a private, fifteen-acre peninsula.  The brochure we received from the resort explains:  “Loews Coronado Bay Resort is just minutes from downtown Coronado, a charming resort village, and a short drive to San Diego’s world-famous attractions.  Resort amenities include direct access to the Silver Strand State Beach, three tennis courts, a private eighty-one slip marina, three acclaimed restaurants, 439 sea-inspired guest rooms and suites, and panoramic views of the San Diego-Coronado Bay.”

I made two visits to the Resorts’ Sea Spa, relaxing in the steam room and sauna, and enjoying the outdoor swimming pool and Jacuzzi.

My patio overlooked the pool area and it was the perfect spot to enjoy room service.  My cereal, fresh fruit, and coffee came within minutes of my order.

CORONADO ISLAND MARRIOTT RESORT & SPA.  After boarding our van, we crossed the Coronado Bridge to arrive at this resort.  The Marriott resort offers tranquility and “life-altering energy” and it delivers.  Perfect for the guest who desires pampered seclusion, it rests on the quiet side of Coronado Island, and is a picturesque, natural paradise and a sister to the sea.

Before lunch I was among the group chosen to tour the Resort’s Spa.  Imagine spending a week in a lovely cottage steps away from a  full-service spa offering relaxation remedies in ten treatment rooms, steam and sauna rooms, and an outdoor spa garden.  The stated goal of a week here is to be indulged and pampered.  Who can resist?   For guests who want physical activity, there is 2,000 square feet of outdoor space designed for energetic sports.  There is also a fully equipped indoor gym and a yoga room.  (Note to self:  enquire about reserving a cottage for next year.)

Before lunch, we were entertained by Melissa d’Arabian, Food Network host and Coronado resident and a bundle of energy and fiery advocate for living in Coronado.  She was joined by the resort’s Executive Chef Michael Poompan who gave us tips on wellness and healthy cuisine.

And then the lunch.  After appetizers of vegetable spread and crudité, pumpkin hummus, beet and yogurt and Swiss chard and labne, came the “Bento Box.” These treats  included Agave roasted carrots, dates, dandelion, goat cheese, spicy greens with citrus-chile dressing, and Quinoa with nuts, seeds, pears, dried fruits, and herbs, sprinkled with a lime dressing.  For our main course, we had a selection of seared Pacific Ocean tuna, cider glazed chicken breast, or squash and kale gratin, all accompanied by the appropriate wine.  Desert came in a coconut pitaya bowl filled with blueberries, fresh fruit, and toasted almonds.

MARINE ROOM IN LA JOLLA.  The Marine Room has been called “The Best of the Best,” and it was a true privilege to be among the IFWTWA members selected to dine there.  Huge glass windows surround the “Room,” where diners are eye level with the surf and gently cascading waves from the Pacific Ocean.  If we had come early in the day, we were told, we would have seen the surfers, but as evening descended we watched couples and families walking along the shore and others lighting the fire pits outside their cottages.

Critics have called The Marine Room “the most exquisite dining experience in San Diego,” and this accolade is well-deserved.  It has pride of place on La Jolla’s finest beach and its cuisine is prepared by the world class and critically acclaimed Executive Chef Bernard Guillas and Chef de Cuisine Ron Oliver.  They selected seasonal variety, hand-chosen local ingredients and the freshest of seafood.  My entrée was Togarashi Sesame Spiced Ahi Tuna and two companions seated near me dined on Vanilla Infused Lobster, Diver Scallop, Kona Kampachi and Hokto Farm Organic Mushroom Necgtar.  They were works of art.

I was fortunate to be seated with Kristin Kacirek, the Marine Room’s Director of Sales and Marketing, and Susie Bright, Marketing Coordinator.  These personable young women entertained me with stories of the history of the “Room,” and of the famous guests who visited through the years.  Before the evening ended, Chef Guillas came over to introduce himself and give me a signed copy of his stunning cookbook,

Originally called The Spindrift Inn, the restaurant opened in 1941 as a four-bedroom, roadside inn and restaurant.  After it was purchased in 1935 by Frederick W. Kellogg, it became the La Jolla Beach and Yacht Club and is now the La Jolla Beach & Tennis Club.  The restaurant became famous for the drama of the pounding surf as diners watched through the windows.  In 1982, El Nino struck and the waves flooded the restaurant, but a nine-month remodeling ensued and the Marine Room came back stronger than ever.

For many celebrities visiting the area, dinning at The Marine Room is “a must,” and the walls are decorated with pictures of movie stars, famous athletes, scientists, and others among the world’s  rich and famous.  I plan to round up my friends and pool our money to rent a beach house.  Guests may surf or simply walk the beach, enjoy French-style, global cuisine, and end the evening with a brandy beach-side by the fire pit.

DEL CORONADO.  Our last activity of the conference was one that is known as “making memories.”  It will certainly be a treasured memory of my West Coast experience forever.  In a setting that was truly romantic, the evening and conference ended with S’mores on the beach at sunset.  Wishing to prolong the tranquility the setting offered, I left the group for a solitary walk along the beach before our van took us back to our headquarters at the Loews Coronado.

When we arrived at the iconic “Del,” as it is known, we had appetizers and wine at the ENO Pizzeria and wine bar and then were taken on guided tours of the landmark hotel by official historian Christine Donovan.  Sara Baumann, public relations manager, and Wayne Harth, director of catering and special events, spoke briefly. We learned that Del Coronado is considered a “living legend” that has served as host to celebrities, royalty, and politicians from the US and foreign countries, and other dignitaries for more than 100 years.

The 757 room Del offers beachfront accommodations.  It was built in 1888 by Eliksha Babcock and H.L. Story as a seaside resort that they envisioned as being “the talk of the Western world.”  It combines natural beauty by the sea with a serene atmosphere that is calming and charming.  Its Spa is world-class and guests who want to be active can choose to surf, “boggie board,” or ride a bike along the stunning coastline.  Or…you can simply remain on the beach and build your own sand castle.

The next morning I took a taxi for a 5:30 ride to the airport and once again we crossed the spectacular, five-lane San Diego Coronado Bridge, the first leg of my journey home from the West Coast to the East.  It was dark, and a ribbon of headlights greeted us as we watched cars going bumper to bumper, I asked the driver why there appeared to be rush hour traffic at this early hour and he explained they were mainly Navy people going to work.  He added that more than 80,000 cars cross that bridge every day.

As the day began to dawn and rays from the morning sun sparkled on the ocean, giving us glimpses of the many ships, I recalled the words of one of my favorite poets, Lord Byron, who wrote a lament when he had to leave Athens.  Borrowing some of his words, I wrote my lament to my West Coast journey:  “Coronado, ‘ere we part, give oh give me back my heart.” 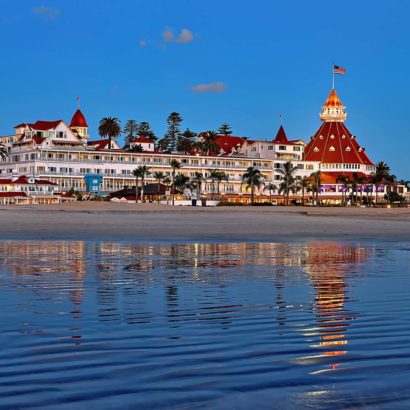