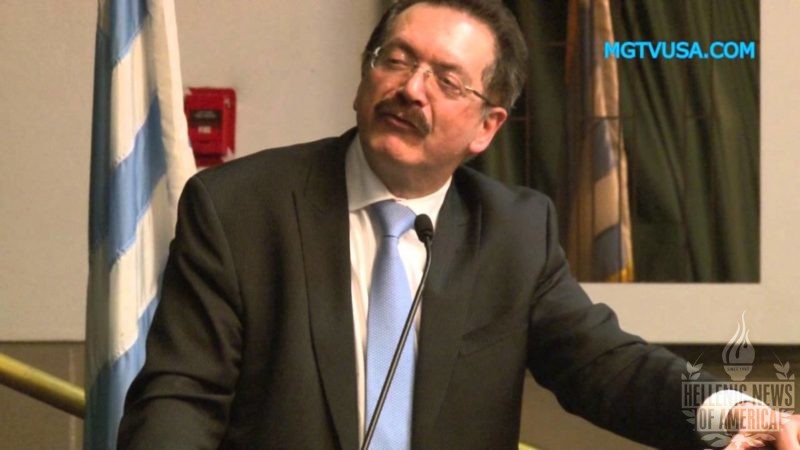 If you are going to sample wines, cheeses and other foods from the Eastern Mediterranean region, it should be done quietly, with a little class.

So goes the thinking this year with a decision to host “A Taste of Hellas: A Mediterranean Palette Trade Portal” April 24 at the Russian Tea Room in New York.

It is being hosted by the Eastern Mediterranean Business Culture Alliance in conjunction with the Hermes Expo International and the Queens Chamber of Commerce.

“A Taste of Hellas” basically showcases various Hellenic and Eastern Mediterranean products for sampling, explains Louis Katsos, president of the EMBCA.  It will have a commercial and educational purpose and is open to a general audience and to trade representatives.

There will also be speakers talking about various aspects of importing Greek and Eastern Mediterranean products and about the growth of these kinds of foods in America.

A master chef of Hellenic Mediterranean cuisine will speak, along with importers and an attorney that deals with U.S./Hellenic business.  Business successes like Megas Yeeros will be featured, describing how the Mediterranean diet is a growing industry in America.

With what’s happening economically in Greece, the country needs to export a lot more of its products, Katsos explains. This event will hopefully encourage American business owners to buy more of those products.

“The more they are known in the market the better they are for the economy,” he says.

Besides sampling delicious foods, those in the trade business will have a chance to see the products, network with the people showcasing them and increase business and commercial opportunities.

Katsos says working with the Hermes Expo is a natural tie in because many of the products being exhibited come from people who have been showcasing at the Expo over the past 20 years.

“What’s different about this event is we’re showcasing it in an iconic setting,” he says.

Instead of a noisy, distracting exhibit hall, guests can be in a more private room, in the landmark interior of the Russian Tea Room.

“It’s more of a private high-end setting for this type of thing.”

Invitations to attend will come from the EMBCA, Hermes Expo International and the Queens Chamber of Commerce.

The EMBCA is always looking for events to promote Eastern Mediterranean business and culture.  The Hermes Expo was on a similar mission and had hoped to host its own “A Taste of Greece” at the Expo this year.

Katsos says he decided to partner with Expo founder Paul Kotrotsios for “A Taste of Hellas” after attending an event in Athens, Greece.  A large part of that program was talking about how to penetrate the U.S. food industry.

“I was fascinated by that discussion. When Paul approached me with what he was trying to do I mentioned to him the Athens event.”

The difference was they didn’t have products to showcase in Athens for the U.S. market, but the Hermes Expo has a long history of people who do showcase their products.

“I thought it would be a good idea to have a combination event,” Katsos says. Products could be sampled and presenters could talk about different topics relating to importing and exporting.

The venue was originally somewhere else, but after Katsos attended a panel discussion at the Russian Tea Room, he thought that would be a perfect location.

Katsos is dedicated to doing what he can to promote products from Greece and help that country solve its severe economic problems.

He prefers “A taste of Hellas” because Greece is actually known as the Hellenic Republic.  The name Greece was bestowed historically on the country by outsiders, he explains.

“If we’re having an event that relates to a taste of a country, we should represent it by what the people call themselves, instead of what other people call you,” he says.

He started EMBCA two years ago to do different types of events than what was traditionally being offered to highlight Hellenic and Eastern Mediterranean business and culture.

One event brought together Hellenic blues artists and African American blues artists from Harlem. Another focused on the Hellenic film industry, another on sports. The events have been very popular, he says.

“Our thing is to promote various industries but also to be educational,” Katsos says.

Katsos hopes “A Taste of Hellas” can be the start of other related events to help spur the Greek economy.

Work needs to be done in the Hellenic Republic to get companies to create the products that the world market wants, he points out.