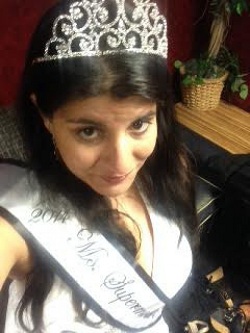 Margaret Skourlis, a Greek-American, won the title of 2014 Ms. Supermodel USA-Petite in Fargo, North Dakota on Saturday, Setp. 6 2014.  This is Margaret Skourlis’ first National title, her prior titles include, Ms. New Jersey United States 2010, Ms. New Jersey United States 2009, Miss Kalamata 2003, Miss Kato Melpia 2002, and Miss Messinia 2001.  Margaret will spend her year as a national queen making appearances, doing signings, photoshoots, and giving speeches to help various charities and inspire the youth.  She has a master’s degree in business administration and a second master’s in political science.  She is very passionate and active throughout her life in helping the Greek community both inside and outside of Greece.  Many of her relatives are still residing in Greece.

Margaret attributes her success to her parents for instilling in her to never give up and always go after her goals.  Margaret is not only a beauty queen but a company owner, model, published poet, published writer, and actress.  In her free time she is very diverse in her hobbies which include scrapbooking, traveling, scuba diving, skiing, swimming, playing piano, and Greek dancing.

Her passion for the Greek community can be seen in all the organizations, Greek student programs she has taken, and positions she has held to help the Greek community.  She is Vice President of the Intercollegiate Hellenic Society.  Formerly she was President of the Maids of Athena Flushing Chapter #126.  She was one of the selected students that participated and finished the AHIF Foreign Policy Program to Greece and Cyprus in 2011.  She completed twice the D.I.A.S. International Academic Studies program in Crete.  During her former beauty queen titles she made appearances and helped various Greek charities and organizations.

Previous articleThe current Political System in Greece will not hold up without the Greek People! The only solution is to hold elections. SYRIZA, the potentially ruling party falls short of the expectations of all the people who worry about OUR GREECE.
Next articleΨήφισμα Συλλόγου Εν Αθήναις-Πειραιεί και Απανταχού Δρυμοτών Καλαβρυτών “Οι Άγιοι Τεσσαράκοντα Μάρτυρες” για τον Θ. Γ. Σπυρόπουλο