GreeceBusinessMount Olympus: playground for gods and mortals
GreeceBusinessCultureTourismFood and TravelRegions of Greece 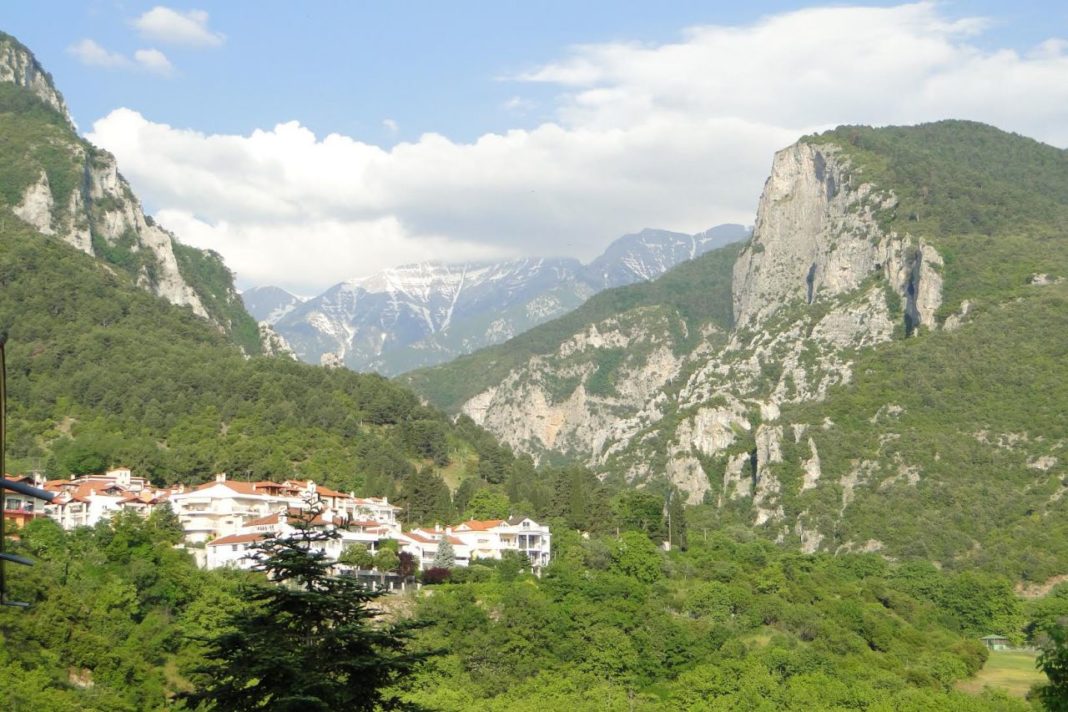 Home to Zeus and his family of gods, Mount Olympus is a range of 52 peaks with Mytikas at 2,918 meters (9,570 feet) the tallest mountain in Greece. The range straddles Thessaly and Macedonia. Interestingly in many minds Macedonia was not part of classical Greece until Philip II’s conquest in the 4th century B.C. Obviously the gods made no such political distinction. Declared the first Greek national park in 1938, a UNESCO Biosphere Reserve in 1981 and a European Union “Most Important Bird” area, the region includes 120 species of flowers and 1,700 species of plants with 23 exclusive to the Mount Olympus microclimate. No wonder the gods wanted this prime real estate.

To the average North American tourist with mental images of blue trimmed whitewashed houses on nearly arid Greek islands, the Mount Olympus region’s red tiled roofed honey colored stone structures, engulfed in a riot of green vegetation punctuated by mountain streams, will come as a shock to the senses. So will the fact that the mountains end a short distance from miles of sandy beaches lining the Aegean Sea.

Olympus National Park is a hiker’s paradise. Superbly laid out, the easily navigable roads and paths cater to all visitors whether their inclinations involve a meandering drive, a ramble through well-marked paths or scaling Mytikas. For the serious hiker and climber, a series of nine “refuges” – hostels – dot the trails. They range from Spilios Agapitos Refuge sleeping over 100 with a restaurant,  Koromilies Leptokarya Refuge for 20 with kitchen facilities to six “necessity refuges,” such as the nine person Agios Antonios, to be used only in emergencies. Since the Olympus range is popular for both summer and winter sports, some, especially the “necessity refuges,” are open year round.

There are several restaurants within the park with scenic views and typical well-prepared taverna cuisine. At Olympus Prionia Restaurant overlooking thick pine forest valleys I dined on such classic dishes as fresh anchovies in virgin olive oil, grilled eggplant with feta cheese drizzled with balsamic reduction and bowls of aromatic vegetable soup. A plate of thick yogurt was framed by cherry, fig and carrot spoon sweets. One can imagine the gods enjoying such a lunch in their palaces scattered among the many “folds” – valleys – of the Olympus range.

Mount Olympus, as sacred ground, continued after antiquity among devotees of the Greek Orthodox Church and new age universalists – the region is considered one of the Earth’s energy convergence zones. At its base is Dion, the nearly three-millennium old holy city of ancient Macedonia dedicated to Olympian Zeus. Within the confines of the park is the 600-year-old Greek Orthodox Monastery of St. Dionysios of Olympus. And scattered throughout are sites steeped in legend and history such as the serenely beautiful Bath of Zeus, a shaded waterfall fed sun-splashed pool which was the father of the gods special place to tryst with Aphrodite – still favored by modern day lovers.

The surrounding prefectures of Pieria and Larissa are studded with relics of their rich history. The archaeological park and museum of Dion preserves the ruins of this once thriving city that hosted an annual festival to the gods dubbed the Macedonian Olympics. Both Philip II and his son Alexander the Great paid homage to Zeus at Dion before embarking on their epic wars.

Ancient Dion is testament to the eternal tourist draw of Mount Olympus. The theater staged Euripides gripping tragedies then and now for summer visitors. The vast thermal baths soothed and treated the ailments of many. Its shrines, especially the Temple of Zeus, drew pilgrims that patronized the merchants and craftsmen who made Dion prosperous. As Mrs. Eleni Benaki of the Dion Museum explained, the well-preserved and elaborate mosaic floors of a merchant’s huge mansion testify to the wealth of Dion.

Tree shaded and well-signed walkways as well as the museum’s priceless collection of ancient art make spending a day at Dion important in understanding the significance of Mount Olympus to the Greek psyche. The modern town of Dion has charming cafes and is as close to popular beaches as to the mountains.

The Monastery of St. Dionysios of Olympus is equally important to the next phase of Greek culture – Christianity. Founded in the 16th century by the charismatic monk St. Dionysios, the monastery achieved a reputation for holiness among Greek Orthodox Christians equal to the ancients’ veneration of the Olympian gods. A man of extraordinary intellect, Dionysios juggled a life of increasing fame with a desire to live as an ascetic, not unlike the Buddha.

Although he founded the monastery that bares his name in 1542, Dionysios personally spent most of his time in solitary meditation among the many caves in the Olympus range. Established when Greece was under Ottoman rule, the monastery faced its greatest tragedy in 1943 when, under suspicion that it harbored resistance fighters, it was destroyed by Nazi forces. Fortunately, many of its treasures – sacred icons, relics and books – had been secretly buried.

I had the privilege of a personal tour of the new monastery by Father Christodoulos. Built in the traditional mountain architecture of stone and wood, the serenity of the monastery encapsulated by the surrounding forest was palpable. The small museum with its subdued lighting gleamed with precious icons and illuminated manuscripts one would expect to find only in the museums of world capitals.

Father Christodoulos conferred upon me a great honor by removing intricate boxes containing several saintly relics from their locked cases and beckoning me to sniff their contents. There was no musty odor. Father Christodoulos smiled, assuring me that this freshness was a sign of their saintly authenticity.

Further up the mountain the original Monastery of St. Dionysios of Olympus is undergoing monumental and painstaking restoration. Despite it being a hot late May afternoon, once my host, Mrs. Aphrodite Leinas, president of the Pieria Hoteliers Association, Mr. Savvas Vasileiadis of the Management Agency of Olympus National Park and I entered the ruined stonewalls the temperature noticeably dropped. Funded by a variety of national and international agencies, all restoration construction is following strict historical procedures and will continue for years. The central church, the Katholikon, is complete with the exception of a few minor details. The iconostasis, the screen in an Orthodox church separating the nave from the sanctuary, is intricately hand carved wood. The horos, the circular chandelier that hangs beneath the dome, is lit only with beeswax candles. There is no electricity in the Katholikon.

The mix of ancient with the present day is the iconic allure of Greece. Clinging to the slopes of Olympus at 2,100 feet elevation with panoramic sea views is the 14th century village of Palios Panteleimonas. Nearly abandoned and left to ruin during the 20th century, it’s now the darling of affluent summer residents and visitors who have restored its small postcard perfect stone houses. With stone streets too narrow for cars, charming guesthouses and cafes, Palios Panteleimonas is almost too classic for words.

Built on the site of an ancient city, towering above the seaside town of Platamon, strategically located on the Vale of Tempe, the imposing 13th century Byzantine Platamonas Castle still stands guard along the main highway connecting Thessaly and Macedonia. Of course its present function is to impress visitors who enjoy the many seaside resorts, such as the elegant Hotel Lito in Plaka Litohoro built by Mrs. Aphrodite Leinas’ father, among the villages that line the 16 Aegean Sea beaches at the base of the Mount Olympus range.

The achingly picturesque town of Litohoro, nestled among towering trees within the foothills of Mount Olympus, makes a perfect base for exploring the entire region. At nearly 1,000 feet elevation, Litihoro has clear views of both Mytikas and the sea. Mrs. Aphrodite Leinas’ charming Hotel Aphrodite on the town square has spacious modern rooms with wi-fi and balconies.

Dinner at Litohoro’s Gastrodromio En Olimpo proves that fine cuisine is simply a natural part of Greek life. Chef/owner Andreas Gavris’ multi course dinner would shine in any of Europe’s cosmopolitan cities. A duo of vegetable and mushroom soups served in espresso cups were paired with an artfully arranged paté of sardine napped with red pepper cream. Sautéed wild mushrooms were topped with caviar and squid ink. A delicate and creamy mushroom risotto and a salad of micro greens were served on a contrasting black plate. Succulent medallions of Olympian black pig nestled with plump prunes was bathed in a light wine sauce and decorated by rose petals and delicate lavender mountain flowers. Wines accompanied each course: a white Domaine Zafeirakis Malagousia, the excellent dry white Santo Asyrtiko and two local Litohoro whites, a malagousia-asyritiko blend and a flavorful chardonnay.

The prize of the evening was the rich red Domaine Zaferakis Limniona 2009 served with the pork. Limniona is an ancient grape indigenous to the northern Aegean island of Limnos that only recently has been rediscovered. Domaine Zaferakis, one of the top wineries in Greece, first bottled it in 2007. It’s a full-bodied wine with moderate tannins and a distinct herbal bouquet of thyme and bay leaves. Perfect with the black pig and known for its hardiness under harsh conditions, it’s an appropriate symbol for Mount Olympus. For despite a tumultuous history spanning five millenniums, Mount Olympus and Greece thrive, forever enthralling the imagination of millions.

By Marc d’Entremont, Travel with Pen and Palate to Greece and the world in the Hellenic News of America