In the Mountainous Village of Tsintzina: The Art of Doing Nothing By Aurelia 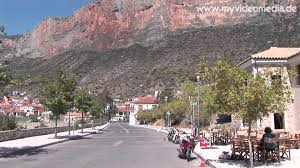 Excitedly, I rushed to Tsintzina, looking forward to doing…nothing! I experienced Greece in an entirely new way when I went to a mountain village in The Peloponnese, because I was told there was absolutely nothing to do there but walk in the woods during the day and sit at a taverna at night. To get there I had to start from Sparti and convince a taxi driver to transport me up the 1,900 meter, precarious road. Many taxis were parked in front of my hotel but I could not get a driver. A young female drove up, wearing jeans and boots and walked with a sense of purpose through the phalanx of men, asking, “Are you the woman who wants to go to Tsintzina?” When I said yes, she motioned to her cab, made some sort of signal to the men (!!), and off we went. “I’m guessing you know Tsintzina,” I said and she answered she did indeed, adding her mother was born in nearby Zoupena. “I am going there tomorrow night—I’m always there on Saturday night.” “What will you do?” I asked, and she said, “Nothing.” We arrived at a summer village populated by residents from Zoupena and Goritsa who come to Tsintzina to escape the summer heat. There are no stores or shops, just summer homes, a few tavernas and kafenia, and one hotel. I checked in, arranging for Helen to pick me up the next morning. I walked through the woods and the village, saw very few people, but felt extraordinarily peaceful. That night I sat alone at a taverna in the village’s center, nibbling on mezedes and sipping wine. Soon I heard the sound of laughter and happy voices and saw men of all ages arriving to sit at the tables. And then we heard footsteps and the promenade began. The females came in pairs – mothers and daughters, sisters and cousins, and dear friends – dressed beautifully in Sunday finery. Everyone was so happy in an innocent, mysterious kind of way. The women strolled, shyly avoiding the eyes of the men, but knowing they were watched. The men concentrated on their small coffee cups, lifting their eyes now and then. In Greece, this evening stroll is called “The Volta.” A similar stroll I saw in an Italian village was called “la passeggiata.” In the middle of the procession was Helen, walking arm in arm with an older woman who I guessed (correctly) was her mother. Jeans discarded, she wore a garment of sheer chiffon that brushed her sandaled feet. Helen looked at me and waved, then continued with her slow walk through the village. I wanted to join to promenade, thinking how exquisite it is to do absolutely nothing. To Telos