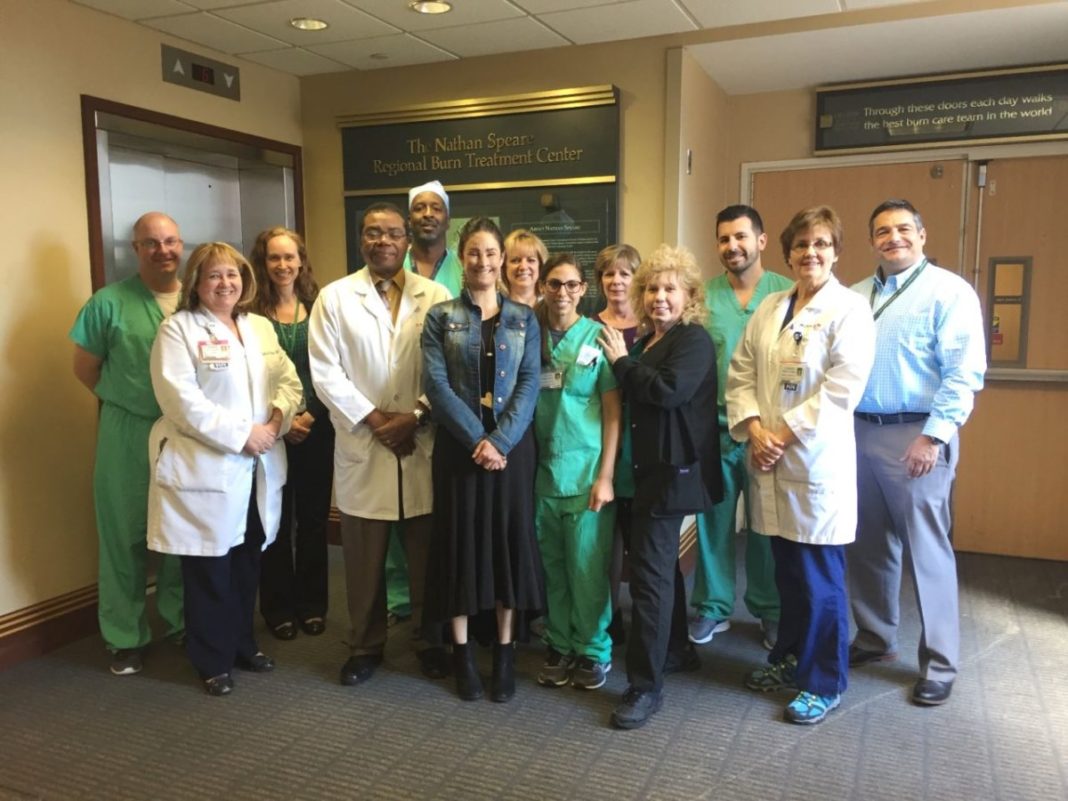 UPLAND, Pa.— Natalia Ponce de Leon, an internationally known and respected businesswoman, burn advocate and 2017 Eisenhower Fellow, visited the Nathan Speare Regional Burn Treatment Center at Crozer-Chester Medical Center in Upland on Monday, May 15. The purpose of her visit was to get a first-hand look at the inner workings of a large-scale, successful burn program. Ponce de Leon spent several hours with a large group of the Burn Center’s team – including Linwood Haith Jr., M.D., chief of Burn Surgery and co-medical director; Cynthia Reigart, R.N., clinical director; Gerarda Bozinko, R.N., burn outreach program coordinator; and a host of Crozer’s burn team members who were more than willing to share their knowledge.

Ponce de Leon, a successful Colombian businesswoman whose face and body were burned by sulphuric acid in a brutal 2014 attack, arrived in the United States on March 25, 2017 to accept the International Woman of Courage Award from First Lady Melania Trump. One week later she kicked off a whirlwind seven-week tour across the country, as an Eisenhower Fellow, to visit numerous well-known burn centers. Eisenhower Fellowships is a Philadelphia-based nonprofit organization that awards research and networking opportunities to extraordinary mid-level businesspeople from around the globe. Fellows must have initiated a project that aims to make a positive, long-lasting impact on their societies. Ponce de Leon was named an Eisenhower Fellow for her work to build a burn unit in her native Colombia.

Spending no more than a couple of days in each town – from San Francisco to Chicago to Baltimore, and many points in-between – Ponce de Leon met with physicians and clinicians who provided research data and walked her through their burn units. Her tour fittingly ended where it began – in Philadelphia – where she toured the Nathan Speare Regional Burn Treatment Center at Crozer, which was named Burn Center of the Year by the American Burn Association (ABA). “We were honored to be included among other prestigious national burn centers as part of Natalia’s cross-country tour,” Haith says. “She is an incredibly brave, intelligent and determined woman. We welcomed the opportunity to exchange ideas and discuss resources for burn care, and wish Natalia great success as she works to bring advanced burn care to the people of Colombia.”

Now working as president of the Natalia Ponce de Leon Foundation, she returns home at the end of this week armed with bags stuffed full with brochures and educational materials, and her head full of new ideas to help bring her mission to life. “My goal is to build a model private clinic in Bogota that I will duplicate throughout my country,” she says. As for her experience at Crozer, Ponce de Leon says that the facility is vastly different from hospitals in her native country. “It’s cozy, has a beautiful ambiance and is clean,” she says. “It doesn’t even feel like you are in a hospital. And the doctors and nurses were very friendly and open with me.”