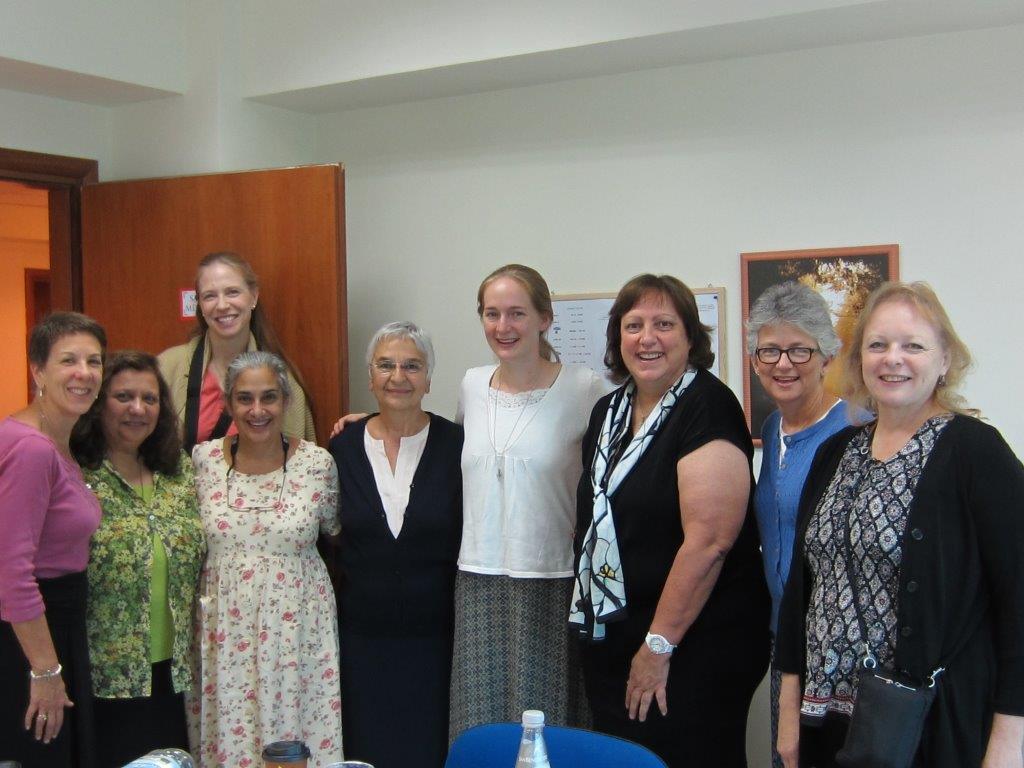 Shen (St.) Vlash Seminary, Durres, Albania, October 5, 2014 by Judge Marina Corodemus. One week ago, seven Orthodox American women, 5 Presbyteras and two lay church leaders came to Albania to work with OCMC professional missionaries. The goal was to meet, confer and share life experiences with Priftereshas (Priests Wives) of Albania. We were led by OCMC Team Leader Renee Ritsi, (FLA.) our team included: Presbyteras Stephanie Panagos, (Conn.) Joy Corona, (CAL.) Anna Lillios (Penn.), Maggie Hock (Neb.) and lay leaders Stella Wacker (NJ-Philoptochos) and Judge Marina Corodemus (NJ-Leadership 100). We seven women had never met each other, did not speak Albanian, and had no expectations other than a desire to serve God and answer a silent calling to go to Albania. So each woman, with her own charismas, went to help the OCMC missionaries. For me, coming from a traditional Greek Orthodox family, I was on a quest to discover if indeed we all were μια ορθόδοξη οικογένεια “One Family Orthodox.” We started our journey in the Albanian capital city of Tirana and were hosted for two nights by OCMC missionary persons who opened their own houses to us. There we saw and learned, from an American perspective, a quick initiation in Albanian culture, family, and Church history. During the day we were treated to visit the Orthodox Protagonist School, which recently graduated its first class of 12 full years, a new kindergarten of 120 children (of all faiths). We were then blessed to view the new Resurrection of Christ Orthodox Cathedral was opened in 2012 and is the third largest Orthodox Church in Europe. Day three, we were driven toward the town of Durres, to the Resurrection Orthodox Theological Academy in Shen Vlash. This major complex contains several chapels, a church, theology school dormitories for men and women, a dining hall, classrooms, and the wonderful “House of Hope” for Children. There all 7 women were housed a most beautiful women’s monastery, under the direction of one petite Orthodox nun, Motra (Sister)Rakela, who alone, runs the lovely monastery of “The Myrrh Bearing Women”, which is adorned with vasilico plants, colorful flowers, and multiple sparrows singing. This became our Albania home with Sister Rakela, the sanctified Myrrh Bearing Women Chapel and the Theotokos to protect us. For the next 5 days, we participated in two, 3 day programs, covering the roles and challenges of serving as Presbyteras, raising an Orthodox family, and Christian dispute resolution, including the social problems of human trafficking. From our Albania Sisters, we heard compelling stories of Orthodoxy being “underground” during the long dark era of communism, with churches having been destroyed and used as storage centers. In the last 20 years, resurrection has occurred, where the church has risen from the ashes of communism to a living, vibrant, exciting Orthodox church. So many beautiful memories and friendship were developed with our brothers and sisters in Albania. Some of the most memorable to me were: (1)One afternoon, while we were awaiting the arrival of Bishop Asti, our Albanian sister broke into a spontaneous singing of village songs, followed by the American women answering in a Gospel song and then most miraculously, we all joined into a three language homage to the Theotokos, singing Agni Parthene Despina in Albanian, English, and Greek. What a rare privedge and blessing to experience Orthodox women, as sisters, coming together to praise the Theotokos. The Second and more awesome experience, was the meeting, visiting, and interacting with his Beatitude Archbishop Anastasios. From the moment we landed in Albania, we heard Albanians speak about our “Blessed Archbishop.” Each person placed their hopes, dreams, and unconditional faith in “our “Blessed Archbishop” who has led us, appointed Albanian clergy, teachers, and scholars, supported mothers, children and provided for a church of true believers. Again, I questioned if this could be true? Seeing this Archbishop, and being in his charismatic presence was for me like meeting Abraham (Father of the Nation), Moses (leads his people toward freedom) and St Nicholas (who cares for his children). The answer was YES, all that the Albanian Orthodox people said of this archbishop was true. They felt the pain of the unsubstantiated attacks leveled against him by non-believers, but reveled in the joy of successes the church had achieve because of him. We were each presented with a cross from His Beatitude, that has his emblem from St. John 12:24, “..unless a kernel of wheat falls to the ground and dies, it remains only a single seed. But if it dies, it produces many seeds.” Here, in Albania, Archbishop Anastasios has cultured the garden of Orthodoxy and that must clearly be pleasing to God. So for me, my personal question of whether we “are we one Orthodox family” is answered by a resounding yes! And, I say, Glory to God, for allowing me to be His witness. PLEASE SUPPORT OCMC missionaries in Albania at: 220 Mason Manatee Way, St. Augustine, FL, United States.32086 Phone 🙁 904) 829-5132 Toll Free: 1-877-463-6784 Fax 🙁 904) 829-1635 E-mail: [email protected]