Off the Beaten Trail: Constantine the Great’s Presence in Russia Today 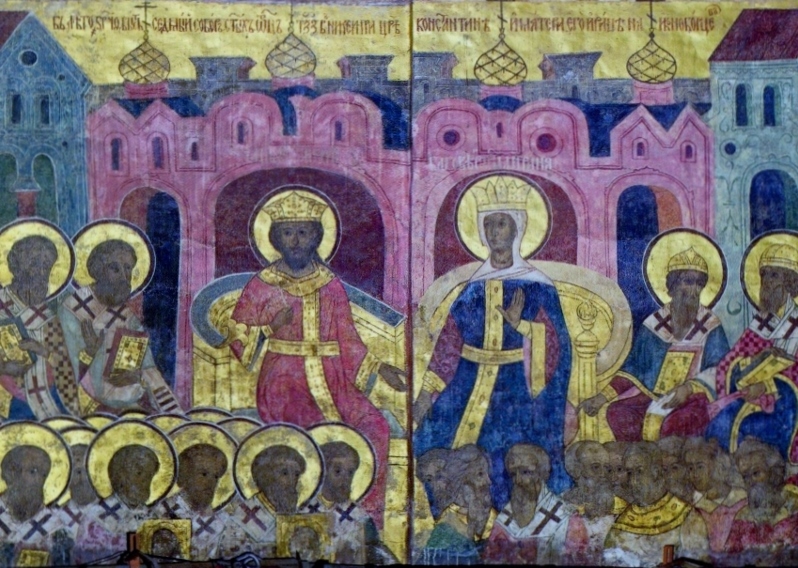 2016 would be different if a Roman General, Constantine, did not win a battle at the Milvian Bridge near Rome, Italy. Constantine the Great initiated the evolution of the empire into a Christian state, but also provided the impulse for a distinctively Christian culture that prepared the way for the growth of Byzantine and Western medieval culture.1 What is his legacy in Russia after over seventy years of communism and atheism?

My search begins in Novgorod, the birthplace of Christianity in Northern Russia.  The Cathedral of St. Sophia, that stands out across Novgorod’s kremlin wall has byzantine domes that look like helmets. This is only in Novgorod churches. “St. Sophia became a model of ecclesiastical architecture, but was never surpassed anywhere in Russia…Novgorod’s Sophia, built by byzantine craftsmen with the help of masons from both Kiev and Novgorod, is grander and more imposing… (than the church of the same name in Kiev)”2 The only surviving 11th century fresco in Russia is the depiction of St. Constantine and his mother, St. Helen. It is one of the oldest works of art in the cathedral and is thought to commemorate its dedication. The amazing pictures of Saints Constantine and Helena have survived in the Martirievskaia Porch. The unique feature of this fresco is that it was made upon dry lime plaster. The exceptional technique used by an ancient artist gives this fresco a specific flying look. Researchers consider this technique to have been used in ancient wooden churches in Russia. Unfortunately, none of them has survived time.3

A beautiful medieval fresco in the monastery of Neo Philosopher in the Lousios Gorge, Greece, shows the great respect for Sts. Constantine and Helen held by the Orthodox world. A similar icon is in the Novgorod State Museum showing both saints as the benefactors of Christianity. “Early Novgorod art up to the middle 14th century…shows the influence of Byzantine art. In those days many icons were brought from Byzantium to Novgorod and numerous Greek painters lived and worked there. Novgorod painting, frescoes in particular, had much in common with the Byzantine art of the Paleologos (last rulers of the Byzantine Empire) reign…In the last quarter of the 14th century, the Paleologos style spread around Novgorod, reinterpreted and became an integral part of Russian art.4

An exhibit in 2012 showcased a Sts. Constantine and Helen icon painted by the tsar’s master iconographers.5 The great respect the Russian Tsarist state had for the emperors that followed Constantine the Great is seen in a painting at the Dormition (Assumption) Cathedral of the Moscow kremlin. Byzantine Emperor Constantine and Empress Irene with participants in the Seventh Ecumenical Council are painted on the northern wall from 1642-43.

Constantine’s conversion to Christianity perpetuated the Judeo-Christian tradition in religion, culture and civilization. The Byzantine civilization he helped create led to the conversion of Russia. Constantine the Great was raised by a single Mother.  St. Helen was abandoned for a connected, wealthy princess. Yet, she influenced her son to become one of the greatest men in Western civilization. In 300’s A.D., a single mother, not a wife, sister or friend, influenced her son to change the course of history through her Christian faith that saved her as an abandoned woman with a child. St. Helen is a role model to our age’s single mothers. Constantine the Great was a ruler/military commander of his age. He was influenced by state religion. It is difficult to understand his cruelty and ruthlessness. This was another time and place where the survival of the fittest by any means took place. There was no political correctness. He aimed at survival.

“Above all, Constantine’s achievement was perhaps greatest in social and cultural history. It was the development, after his example, of a Christianized imperial governing class that, together with his dynastic success, most firmly entrenched the privileged position of Christianity; and it was this movement of fashion, rather than the enforcement of any program of legislation, that was the basis of the Christianization of the Roman Empire. Emerging from it in the course of the 4th century were two developments that contributed fundamentally to the nature of Byzantine and Western medieval culture: the growth of a specifically Christian, biblical culture that took its place beside the traditional Classical culture of the upper classes; and the extension of new forms of religious patronage between the secular governing classes and bishops, Christian intellectuals and holy men. Constantine left much for his successors to do, but it was his personal choice made in 312 that determined the emergence of the Roman Empire as a Christian state.”6 Modern Russia has preserved Byzantine civilization in iconography, churches, monuments and museums. This article is dedicated to the memory of the late Constantina Kotsiou Siolas and Dr. Constantine Georgiou.

Photo – Painting at the Dormition (Assumption) Cathedral of the Moscow kremlin. Byzantine Emperor Constantine and Empress Irene with participants in the Seventh Ecumenical Council