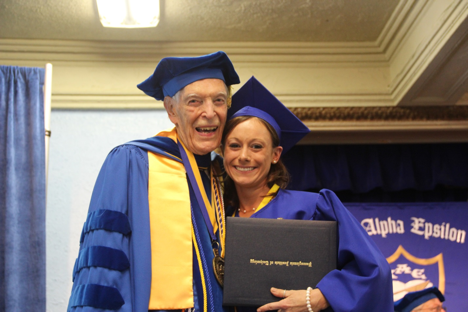 The tenth Commencement Exercises and Pinning Ceremony for the Practical Nursing program of the Pennsylvania Institute of Technology were held at the Pennsylvania Institute of Technology Theatre on Friday, June 24, 2014, before a happy audience of more than 300 families and friends. Twenty-two students were awarded certificates in Practical Nursing, and each participated in a moving Nightingale Ceremony as they each lit the flame of knowledge from the other’s candle lamp. To date, more than 330 students have completed this rigorous course at P.I.T. and have gone on to begin their nursing careers.

Margie Hamilton, R.N., M.S.N., Director of Practical Nursing Program opened the commencement exercises and introduced President and Founder Walter R. Garrison, P.E., who welcomed the graduating class, family, and friends and expressed his pride on their accomplishments and that of their families for their caring support on their student’s career path.

The P.I.T. Practical Nursing Program comprises a rigorous 12-month course of study in the classrooms on the Media Campus, 800 Manchester Avenue, Media, PA, 19063, and at local clinical sites. Dedicated faculty and small clinical groups combine to provide a comprehensive basis for a rewarding career in this important medical field.

Program Director Margie Hamilton, R.N., M.S.N., said that the demand for Licensed Practical Nurses and nurses is predicted to increase in the near future, providing PN graduates with an exciting entry to a nursing career. Hamilton said that surveys indicate that the employers are well-satisfied with the P.I.T .graduates and that the graduates feel that the P.I.T. program

prepared them well. Hamilton said that the majority of P.I.T.’s Practical Nursing graduates stay in the area and that many are offered employment from their clinical sites.

The Pennsylvania Institute of Technology was founded 63 years ago. P.I.T. is a not-for-profit, two-year technical College, accredited by the Middle States Commission on Higher Education, with thousands of alumni throughout the country. The Practical Nursing Program is presented on the Media Campus, located at 800 Manchester Avenue, Media, PA, 19063 – 610.892.1500. Additional information is available at www.PIT.edu about the Practical Nursing program, the Physical Therapist Assistant program, and other medical and engineering career programs.