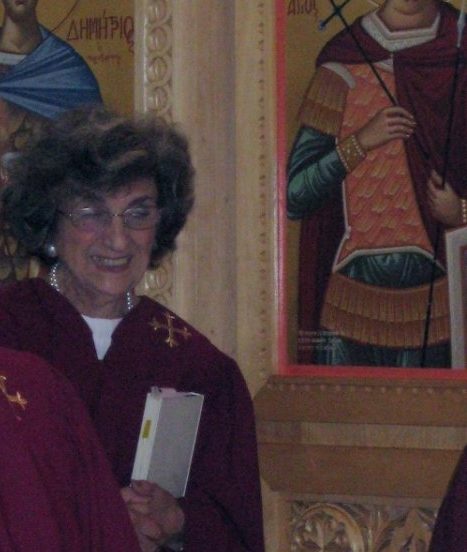 My memoriesof Daisy is that of a brilliant person and scholar. She opened my eyes to baking “edible heirlooms” of Greek pastries. Her Greek recipes were the best. Her knowledge of Byzantine and Greek civilization revealed the truth, not recognized in mainstream history.

We sat together at a historic visit of Archbishop Justinian, representative of the Moscow Patriarchate in the United States on Sunday, December 11th, 2011 at the Kimisis tis Theotokou Greek Orthodox Church of the Hamptons. “Mrs. Daisy Lainis, wife of WWII veteran Tom Lainis, described the Slavonic liturgy to me that day. Mrs. Lainis, educator and editor of the Kimisis tis Theotokou church newsletter, has volunteered her services in St. Nicholas Greek Orthodox Church, Flushing, St. John’s Church of Blue Point and Kimisis Church of Southampton. Her narration of our Byzantine roots in Western Anatolia inspired me to acquire a master of art’s degree of byzantine History in 1973 before the formation of a Greek Studies Center in the mid 1970’s. She told me once that the “Russia’s defeat in the Crimean War was a defeat for the Greeks because they were our allies. Western historians are biased towards Russia who has helped the Greek Orthodox people.”1

“Wikipedia confirms her view saying “Moreover, Greeks have always considered Orthodox Christian Russia as an ally and viewed the Crimean War as a grave injustice against Russia and any support of the Ottoman Empire a grave threat to Greece’s recent independence,” at  http://en.wikipedia.org/wiki/Crimean_War. Her grandfather Kazanas perished in the 1922 death march of the men of Kato Panagia (in Tseme province of the State of Smyrna) into the interior of Asia Minor.”2

“My father, Constantine Kazanas, was sailing to the United States in 1916, during World War I,” said Mrs. Daisy Lainis, in the article “Where Did We Come From?,” Orthodox Church of the Hamptons, January/February, 2011, p. 8. “On the way, the ship was captured by a German ship. A bit later, the Germans were captured by the British, and the Greek ship, after spending some time in London, was allowed to continue the voyage to the United States. Constantine Kazanas, 14 years old, therefore arrived in New York. He had lied about his age and had been hired to work on the railroad out West, where his father, Demosthenes Kazanas, was also working.”

She continues saying “as a matter of fact, many Greeks worked there together. Many of them lived in one room and shared living conditions. In 1921, conditions were very strained in their homeland, in Asia Minor. Demosthenes decided to return to his family and return to his own veterinary business. Constantine begged his father not to go, but me!’ In 1922, the Turks invaded Asia Minor and their town Kato Panagia (lower Saint Mary’s) was completely destroyed. There was time for them to put their families in boats and send them away, but every man and boy over 14 years ago was sent on a death march from which no one ever returned.”3

Her encouragement shaped my life and all around her. “What you leave behind is not what is engraved in stone monuments, but what is woven into the lives of others.” –  Pericles