CommunityRep. Maloney Pledges That U.S. Will Stand By Ukraine As Crisis Continues
Community

Rep. Maloney Pledges That U.S. Will Stand By Ukraine As Crisis Continues

International Law can help us navigate through the present security crisis, FM Dendias says at OSCE 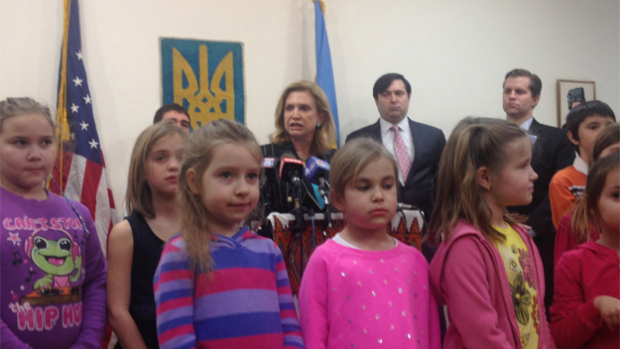 Rep. Maloney Pledges That U.S. Will

Stand By Ukraine As Crisis Continues

NEW YORK(CBSNewYork/AP) — The White House says President Barack Obama is continuing his telephone outreach on Ukraine during his Florida vacation.

Obama also held a conference call with the presidents of Lithuania, Latvia and Estonia. The White House says details will be released later Saturday.

In New York, Rep. Carolyn Maloney, joined the Ukranian Congress Committee of America, and New Yorkers with loved ones in Ukraine to discuss the ongoing crisis, 1010 WINS  reported.

“Everyone is confused because everything is changing everyday,” one woman told 1010 WINS’ Eileen Lehpamer.

Although she moved to the U.S. a decade ago her father remains in Kiev.

Russian forces invaded the strategic Crimea peninsula of Ukraine a week ago, a move that the U.S. and its allies say violated international law.

Russian President Vladimir Putin says he has the right to protect Russian interests in Crimea.

The regional parliament in Crimea has set a March 16 vote on leaving Ukraine to join Russia. Obama says such a vote would violate international law.

This article originally ran on https://newyork.cbslocal.com/