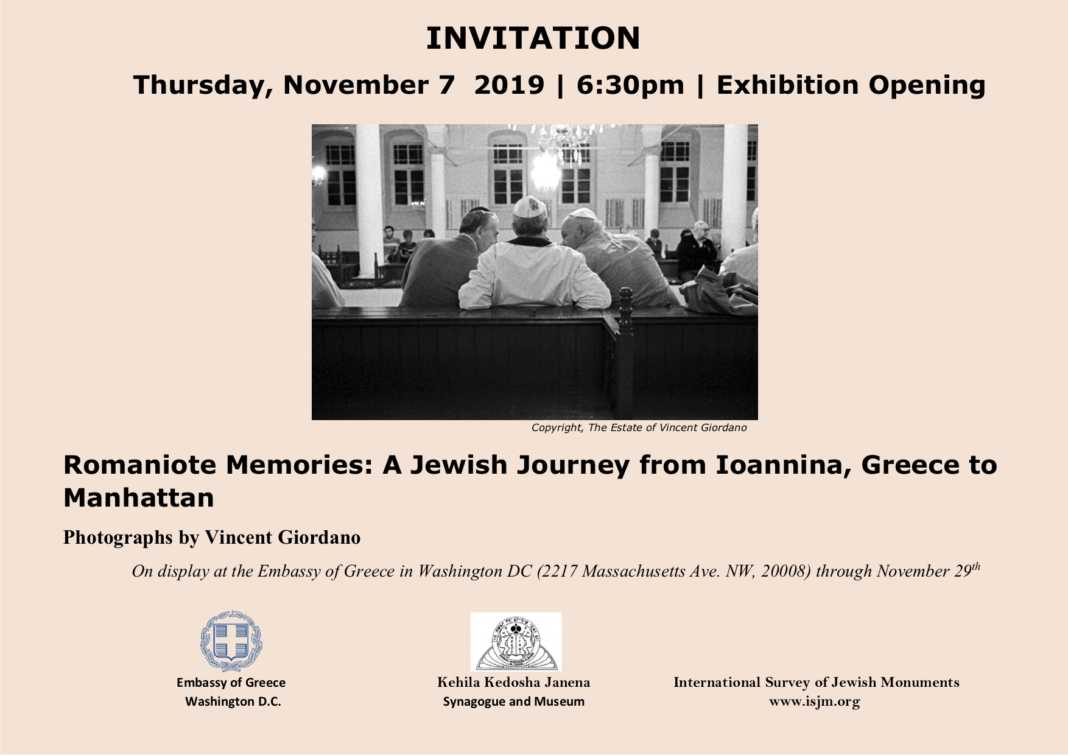 “Romaniote Memories – a Jewish Journey from Ioannina, Greece to Manhattan: Photographs by Vincent Giordano” will open at the Embassy of Greece in Washington, D.C. on Thursday, November 7th, 2019 and continue through November 29th, 2019. A lecture on the Romaniote Jews by Dr. Samuel Gruber and Marcia Ikonomopoulos will take place at the Embassy on Wednesday, November 13th.

The photographs are part of a multi-media archive, created by Giordano, who died in 2010, which was sponsored by International Survey of Jewish Monuments and since June, 2019 has found a new home at the Hellenic American Project and Special Collections at the Library of Queens College, New York under the direction of Dr. Nicholas Alexiou.

The Vincent Giordano multi-media archive is comprised of an assortment of written material, photographic negatives, prints and slides, audio cassettes and other tapes, video mini-cassettes and other recordings, and miscellaneous material related to Giordano’s more than decade-long documentation of the Greek-Jewish community of Kehila Kedosha Janina in New York and the synagogue and community in Ioannina, Greece. Mr. Giordano received a grant from the Fulbright Foundation in 2009 with the Jewish Museum of Greece acting as the host institution.

In 1999, photographer Vincent Giordano made an unplanned visit to the small Kehila Kedosha Janina (KKJ) synagogue on New York’s Lower East Side.  He knew little about Judaism or synagogues, and even less about the Romaniote Jewish tradition of which KKJ, built in 1927, is the lone North American representative.  In this he was not alone.  Romaniotes –are among the least known of Jewish communities. Since the Holocaust, when 85% of all Jews in Greece perished and the historic Romaniote communities in Greece largely destroyed, KKJ has struggled to maintain its’ millennia-old traditions.

For additional information and jpg photos for publication please contact: