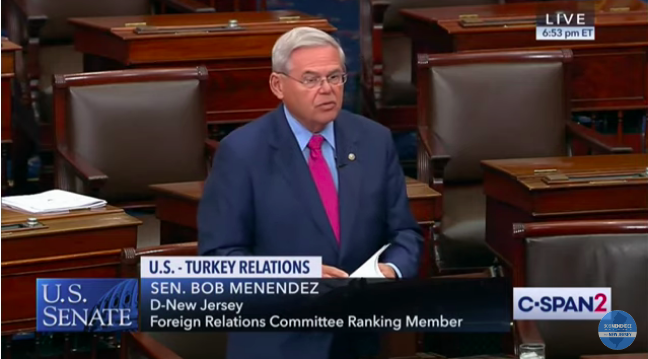 I write regarding President Trump’s engagement with Turkey’s President, Recep Tayyip Erdoğan. I have repeatedly raised concerns about President Trump’s relationship with President Erdoğan, including its impact on U.S. national security and on the proceedings against Halkbank over its sanctions violations.[1] Recent reporting by Bob Woodward and Carl Bernstein has only reinforced my concerns.

In audio recordings made for Mr. Woodward’s book Rage, President Trump said that “I get along very well with Erdoğan, even though you’re not supposed to because everyone says, ‘What a horrible guy.’ But, you know, for me it works out good.”[2]

While it may have worked out for the President personally, this relationship has not worked out well for the national security of the United States, the country he was elected to lead. I would like to highlight three examples:

First, under President Trump’s leadership, Turkey purchased an S400 air defense missile system from Russia in clear violation of U.S. sanctions. Though the system was delivered more than a year ago and was tested on American-produced fighter jets, President Trump has yet to impose sanctions on Turkey for this behavior. This passive approach has emboldened Turkey, threatened the cohesion of NATO and endangered the security of countries in the region, including Israel, Greece and Cyprus.

Third, I was proud to lead the Senate last December in adopting a resolution that recognized the Armenian Genocide. For too long the United States has ignored the truth, which has hampered our credibility in calling out similar crimes that have taken place around the world. This historic resolution passed by unanimous consent and finally put the U.S. Senate on the record as accepting the facts of this terrible crime. The resolution faced strong opposition by the White House and President Erdoğan. In fact, at the behest of the White House, three separate Senators objected on the floor of the Senate to earlier efforts to pass the legislation.

In each of these examples, President Trump’s positions or silence appear to have been swayed by his relationship with President Erdoğan, or his own personal interests in Turkey, rather focused on promoting U.S. national security interests.

And there is good reason to believe that this is the case. According to a June 29, 2020 CNN article by Carl Bernstein, President Trump was reportedly susceptible to being taken advantage by leaders such as President Erdoğan, in part because he was focused on pursuing his own personal and electoral interests during these calls and bypassed normal protocols.[3] In one specific example, Mr. Bernstein wrote that:

[D]eleterious US policy decisions on Syria — including the President’s directive to pull US forces out of the country, which then allowed Turkey to attack Kurds who had helped the US fight ISIS and weakened NATO’s role in the conflict — were directly linked to Erdogan’s ability to get his way with Trump on the phone calls.[4]

The withdrawal from northern Syria and subsequent Turkish invasion damaged our national security by further undermining our credibility with partners and allies worldwide, fueling ISIS jailbreaks, and endangering the lives of U.S. service members as well as our Kurdish partners. The American people deserve to understand how and why this dangerous policy was developed.

Mr. Bernstein also referenced an allegation from former National Security Advisor John Bolton’s book that “at Erdogan’s urging, Trump offered to interfere in an investigation by then- US Attorney for the Southern District of New York Geoffrey Berman into the Turkish bank [Halkbank], which was accused of violating US sanctions on Iran.” This is not the first time such disturbing allegations have been made about the President’s willingness to interfere in U.S. law enforcement investigations at Erdoğan’s behest; and since these revelations, Berman was abruptly fired.[5] It is critical that we understand why President Trump is trying to undermine one of the largest Iran sanctions evasion cases in history, and how conversations with President Erdoğan may have influenced those efforts.

Fortunately, records that may address these troubling allegations appear to exist. As Mr. Bernstein reported,

Despite the lack of advance notice for many of Erdogan’s calls, full sets of contemporaneous notes from designated notetakers at the White House exist, as well as rough voice-generated computer texts of the conversations…there are also existing summaries and conversation-readouts of the President’s discussions with Erdogan that might reinforce Bolton’s allegations against Trump in the so-called “Halkbank case”.

Given the grave national security interests at stake, I request that you provide the following no later than September 30, 2020:

For any documents that may require a classified response, please contact Committee Democratic staff to arrange an appropriate production. Thank you for your attention to this important matter, and I look forward to receiving your response.