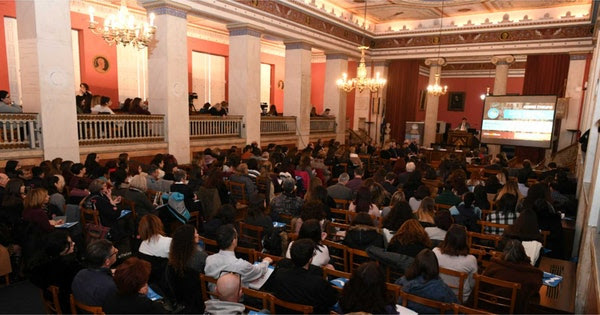 The urgent need to take specific measures against Sexual Abuse of Children, due to the dramatic increase of cases that occur daily was highlighted at the International Conference organized by “The Smile of the Child” in Athens

“The Smile of the Child” united its forces with the Greek and international scientific community in organizing the International Conference entitled: “Child Sexual Abuse: Next Steps in the Holistic Support of Children”, held on Thursday, the 28th of February in Athens. The conference was organized under the aegis of the National and Kapodistrian University of Athens and with the kind support of the Embassies of Sweden and the United Kingdom.

The conference shed light on the dramatic increase of the phenomenon on a global scale. Indicatively, according to the BECAN survey on the violence against children, 1 out of 6 children in Greece will fall victim of sexual abuse at a certain point in their lives, 1 out of 13 children will be subject to physical abuse from a perpetrator, whereas 1 out of 30 children will experience a rape incident or a rape assault. At the same time, according to the World Health Organization 1 out of 4 adults has fallen victim of abuse as a child, on a global level, while in 80% of the cases the abusers belonged to the family or wider family environment of the child.

A key conclusion of the more than 700 participants who took part in the conference, among them distinguished Greek and foreign scientists, public officials, representatives of national authorities, international organizations and non-governmental organizations, the judiciary, the law enforcement, health and other professionals in the field, was the fact that the cases of child sexual abuse are not reported. In Greece alone, only 1 out of 1.000 cases is estimated to be reported to the authorities or child protection services, whereas in 2018 “The Smile of the Child” received only 4 reports on sexual abuse cases out of 729 reports that were made in total to the National Helpline for Children SOS 1056.

The conference was opened by the Prosecutor of the Supreme Court, Mrs. Xeni Dimitriou, while addresses were made by the Rector of the National and Kapodistrian University of Athens, Professor Meletios-Athanasios Dimopoulos, Her Excellency Kate Smith, Ambassador of the UK in Greece, Her Excellency Charlotte Sammelin, Ambassador of Sweden in Greece, and the Greek Deputy Ombudswoman for Children’s Rights, Ms. Theoni Koufonikolakou.

“Today we unite our voices against the abuse of children, combining the knowledge of the most distinguished scientists from Greece and abroad with the precious experience of professionals working on the frontline. Sadly, child sexual abuse remains mostly a Secret. Children fear to speak out about what is happening to them, suffering from the horrible consequences, whereas adults prefer to keep their mouth closed”, said the President of the BoD of “The Smile of the Child”, Mr. Costas Yannopoulos. In the opening speech of the conference, Mr. Yannopoulos referred to the global efforts against the phenomenon, while he put emphasis on existing gaps, problems and challenges in the child protection system in Greece, and the need to enhance cooperation and promote very specific measures on the institutional level.

“Today we continue our nationwide campaign IT REMAINS A SECRET, making our intention to find a solution at national and international levels clear. We have opened the discussion on child sexual abuse and we will not close it until the suffering of some children ceases to remain a secret and until the number of cases becomes ZERO”, he added.

The President of the Organization announced that the main conclusions of the conference will constitute the Declaration of Athens, promoting the urgent need for concrete measures on a global scale for the holistic support and protection of children from sexual abuse and violence. The Declaration of Athens will be announced soon from “The Smile of the Child”.

The conference gave the opportunity to participants to analyze the social policies for tackling and preventing child sexual abuse. Professor of Sociology at the University of New Hampshire in the USA and world leader in this field for over 40 years, David Finkelhor referred to the positive progress over the past decades in the field of prevention of the phenomenon. “The evidence from the prevention programs to treat victims and the mental health consequences of sexual abuse is good. However, some of the more popular and expensive policies for sex offenders have not been shown to be effective, whereas treatment of offenders does not seem to reduce re-offending”, he added.

Similarly, Carl Göran Svedin, Professor at the Linköping University in Sweden, emphasized the importance of following a multi-professional approach, work and collaboration for protecting the vulnerable children, whereas Vasiliki Artinopoulou, Professor at Panteion University in Greece, focused on the right of children to judicial protection and the crucial role of proper education and training of all the professionals in the field. Sia Kakarouba, Coordinator of the Child Hotlines/Helplines of “The Smile of the Child”, presented the experience of the Organization, highlighting the persistent problem of underreporting of child abuse cases. In 2018 alone, the National Helpline for Children SOS 1056 received only 4 reports of child sexual abuse cases.

Dr. George Nikolaidis, Psychiatrist, Scientific Responsible of ‘House of the Child’ Day Center of “The Smile of the Child”, Director of the Department of Mental Health and Social Welfare at the “Institute of Child Health” and Chairperson of the Lanzarote Committee/ Council of Europe, pointed to the fact that the available data on the extent of the phenomenon in Greece is quite shocking. In this regard the Lanzarote Convention, ratified by the Hellenic Parliament since 2007, proposes a number of measures for the effective prevention of the phenomenon, the provision of proper therapy and support services to the victims and the prosecution of the perpetrators, as well as the participation of children at all stages of alleviating the consequences of their victimization.

Professor Kevin Browne from the University of Nottingham in the UK analyzed the role of the child as a witness in the process of interviewing children to obtain valid and reliable reports of sexual abuse and assault, noting that that memories from repeat abusive incidents result in the confusion of victims. However, these facts need to be taken into account when interviewing children without meaning that victims are unreliable.

Focusing on the process of judicial testimony, Chris Newlin, Executive Director of the US-based National Child Advocacy Center (NCAC), highlighted the importance of a multidisciplinary approach, offering the successful example of the Child Advocacy Centers in the United States. He also referred to the initiative of “The Smile of the Child” to establish a similar Center in 2014 in Greece in cooperation with the US National Center and the support of the US Embassy in Athens. This Center is the first facility of this kind in the country and was set at the disposal of the Ministry of Justice and the competent authorities.

On the margins of the conference, workshops will be held from the foreign guests of the conference at the Center of Education & Training of “The Smile of the Child” focusing on the issue of child sexual abuse and with the aim to offer knowledge and useful training to professionals working in the field.