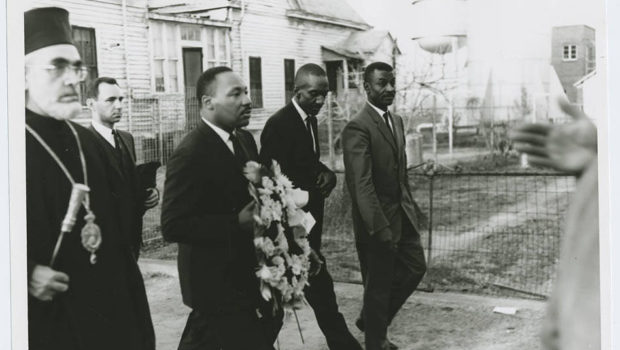 “The Church will not be pessimistic, nor sit quietly in its handsome houses of worship while war rages outside its churches for the bodies, minds and souls of its people.”

These powerful words were spoken by His Eminence, the late Archbishop +Iakovos of blessed memory. The Archbishop spoke the words as he marched in Selma, Alabama, with the Rev. Martin Luther King, Jr. in 1965. The only Orthodox Hierarch in that march and scorned by many fellow Hierarchs and clergy, Iakovos, was warning all of American Orthodoxy that the forces of racism and bigotry were strong, and that the Church could not simply ignore the plight of the victims, or be deaf to their brutal cries—preferring instead the dulcet and comfortable sounds of its choirs and the sweet smells of its incense.

The Gospel is not only to be heard, it is to be done. It is not only to be acknowledged, it is to be lived. It is easy to privatize Orthodoxy, to make it museum-like, to become so introverted that we exclusively consider only the inner dimensions of our life such as prayer, fasting, Divine Liturgy, Bible reading, and the Sacraments. While these are essential elements of discipleship and of becoming more authentically spiritual, there is an equally important dimension of our faith that requires a similar commitment and fervency, namely, the pastoral and social responsibility of the Church.

The Great Council of the Church, held in June 2016, gave expression to the centrality of the social teaching and action of the Church in its conciliar document entitled “The Mission of the Orthodox Church in Today’s World.” The Council Fathers teach that “The Church as the Body of the incarnate Logos of God (St. John Chrysostom, Homily before Exile) constitutes the living “presence” as the sign and image of the Kingdom of the Triune God in history, proclaims the good news of a new creation (II Cor 5:17), of new heavens and a new earth in which righteousness dwells (II Pt 3:13); news of a world in which God will wipe away every tear from people’s eyes; there shall be no more death, nor sorrow, nor crying. There shall be no more pain (Rev 21:4-5).”

The newness of Creation and its divine worth extend to the nature and destiny of the human person: “Let us make man in our image, after our likeness….” (Gen. 1:26) This is the foundation of Orthodox social teaching: all human persons are “sacraments” revealing the face of the living God and therefore are to be accorded reverence and respect.

This overall unity of Creation and of mankind itself is expressed poignantly in the Eucharistic liturgy. The Council Fathers continue: “The Divine Eucharist brings together (I Cor 11:20) the scattered children of God (Jn 11:52) without regard to race, sex, age, social, or any other condition into a single body where there is neither Jew nor Greek, there is neither slave nor free, there is neither male nor female (Gal 3:28; cf. Col 3:11).”

This eucharistic worship, the Divine Liturgy, both expresses the inherent dignity of every person (Orthodox or not!) and in the act of worship, it creates that unity. This God-given stature of the person is the basis for the Church’s mission to the world. It is the foundation of its teaching and practice on social justice and equality and its authoritative defense of each and every human person who, from conception to natural death, our faith professes, is “the image of the unseen God”. (St. Cyril of Jerusalem)

This is the heart of the Church’s social Gospel, and no political ideology, no government, no secular society or civilization, no vogue philosophies—nothing can take it away. To forget this truth, to ignore it, or to try to revise, change, or dilute it, is to embrace what the title of a book by the Rev. James Wallis calls “America’s Original Sins”—racism, prejudice, bigotry and division. What happens on our Altar and from our pulpit every Sunday must spill out the Church doors to the lives and living places of those who suffer and cry out, who are lost in expanding poverty, whose needs have become serious threats to life, and whose skin color, ethnic background, personal faith or national origin have become targets for those of darkened minds and darker hearts.

Again, from Selma, Archbishop Iakovos reminds us: “We have fought oppressive and repressive ideas and political regimes, based on Christian principles, for centuries…a Christian must cry out in indignation against all persecution and prejudice.”

To do this, you and I must begin by owning and repenting of our own prejudice, the casual remarks, the cynical quips we make, the generalizations and divisive thinking or comments, the airs of superiority we put on, and the silence we keep when others are disparaging an individual or a group. These attitudes can be direct or hidden, they can be disguised in humor or expressed in sarcasm. Whatever the case, they are divisive and, to be sure, they are sinful. We need to confess not only bad language and forgetting morning and evening prayers, and not fasting, but, more to the point, we need to confess the fact that we have demeaned another, put others down, slandered others, been prejudicial, and, in fact, offended the body of Christ! We must own and repent.

We are likewise summoned to cleanse our church communities of any prejudice or attitudes that tear down, exclude, or disparage others. Secondly, we are called out of the coziness of our Orthodoxy into the mix of the public square. God’s people are continually called upon to exclaim “No” and “Repent” to those forces bent on dividing or destroying human persons. This is the prophetic call of every Christian, and no Christian is exempt from it. Because of this, we must fight the temptation to withdraw from society, to become “ornamental”, to avoid taking on and facing the difficult or uncomfortable stands, and worst of all, to remain silent out of fear that we will be rejected, thought ill of, or appear different.

Silently blending in is not and can never be the goal of the Orthodox Christian Church. It was not Christ’s goal. Preaching and witnessing the Gospel of Christ with the bluntness and directness that He preached it, can be our only choice.. When in Selma for the march with Dr. King, Archbishop Iakovos heard of the murder of a Unitarian minister who was there to march the next day. In prophetic indignation he said: “Our Orthodox Church has never hesitated to fight, when it felt it must, for the rights of mankind; and many of our Churchmen have been in the forefront of these battles time and again. Let this pastor’s martyrdom be an inspiration and a reminder to us that there are times when we must risk everything, including life itself, for those basic Gospel ideals of freedom, justice and equality.”

Amen, Your Eminence. May your memory be eternal!

Orthodox Christian Network (OCN) is a 501(c)3 and an official agency of the Assembly of Canonical Bishops of the United States of America .