THE ART INSTITUTE OF CHICAGO PRESENTS HEAVEN AND EARTH: ART OF BYZANTIUM FROM GREEK COLLECTIONS 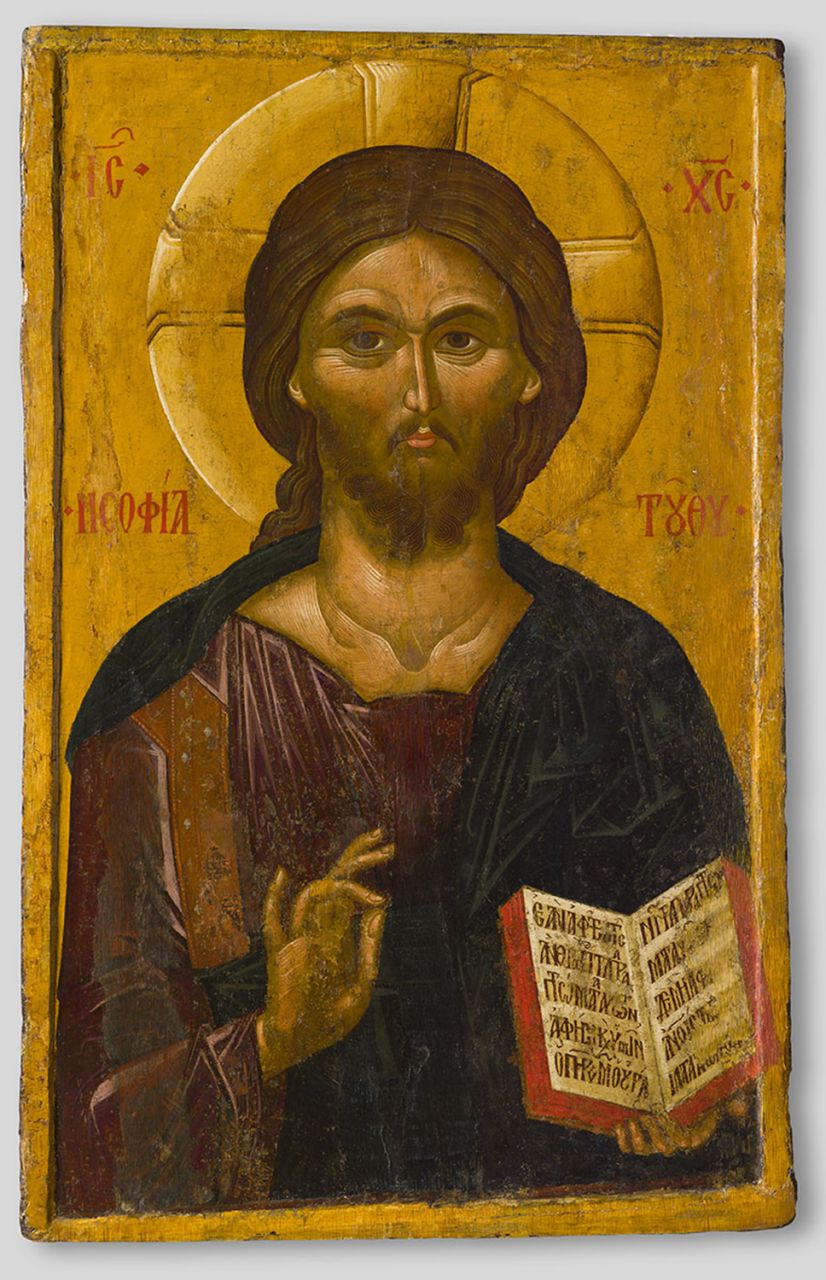 Over 60 Works From Greece Represent Life in the Empire that Lasted for More than a Millennium A new exhibition at the Art Institute of Chicago, Heaven and Earth: Art of Byzantium from Greek Collections, presents more than 60 superb artworks of the Byzantine era, from the 4th to the 15th centuries. Organized by the Hellenic Ministry of Culture and Sports of Athens, Greece, with the collaboration of the Benaki Museum, Athens, and originally exhibited at the National Gallery of Art in Washington, DC, and the J. Paul Getty Museum in Los Angeles, the exhibition includes major artistic holdings from Greece consisting of mosaics, sculptures, manuscripts, luxury glass, silver, personal adornments, liturgical textiles, icons, and wall paintings. About one third of the original exhibition will be presented in the Art Institute’s Mary and Michael Jaharis Galleries of Greek, Roman, and Byzantine Art from September 27, 2014, through February 15, 2015.

For more than 1,000 years, Greece was part of the vast Byzantine Empire, established in 330 A.D. by the emperor Constantine the Great, who moved the capital of the Roman Empire east to a small town named Byzantium in modern-day Turkey. Renamed for him and transformed into Constantinople, Byzantium would come to represent an empire of splendor and power that endured for more than a millennium. Greek replaced Latin as the official language, and Greece itself was home to important centers of theology, scholarship, and artistic production—as 2 evidenced by the luxurious manuscripts displayed in the exhibition. “When we opened the Mary and Michael Jaharis Galleries of Greek, Roman, and Byzantine Art, we were given the opportunity to host great exhibitions alongside our collection of ancient and Byzantine art,” said Douglas Druick, President and Eloise W. Martin Director of the Art Institute. The first exhibition in the Jaharis Galleries was Late Roman and Early Byzantine Treasures from the British Museum in 2012 that featured artworks from the 4th-7th centuries. “Through our collaborations with the organizing institutions of Heaven and Earth, we are fortunate to explore the next chapter of Byzantine art history as we welcome singular and beautiful artworks—many of which have never been shown outside of Greece—that span the history of this powerful empire.

” Heaven and Earth explores the rich legacy of the Byzantine Empire through five main themes: the transition from the Classical to the Byzantine world, spiritual life, intellectual life, the pleasures of life, and cultural exchange in the waning years of the empire in the 15th century. The exhibition opens with the Head of Aphrodite, a Roman marble sculpture of the Greek goddess Aphrodite that had later been altered with a cross carved on her forehead, presumably to Christianize it or reuse it as an image of a saint. From its beginning in the 4th century the Byzantine Empire would embrace its Classical origins while forging a new spiritual aesthetic to outfit the ceremonies and interior of the Christian church. Icons of holy persons, saints, important theologians, and sacred events were painted to be channels for the devoted to the heavenly realm while mosaics and silks embroidered with gold and silver reflected the glimmering candle light of the church. Jewelry, resplendent with precious and semi-precious gems—including a personalized engagement ring—perfume flasks, and silver and ceramic dinnerware that reveal the spectacle of the banquet, all allow visitors a glimpse into the individual lives of the Byzantines. “Heaven and Earth represents a truly international effort,” said Karen Manchester, Chair and Curator of Ancient Art in the Art Institute’s Department of Ancient and Byzantine Art. “This is our first collaboration with the Hellenic Ministry of Culture and Sports and the Benaki Museum and it has allowed the Art Institute the remarkable opportunity to display priceless treasures from Greece.” Additionally, the Art Institute will be the sole U.S. venue for the 14th-century Icon of Saint Prokopios. 3 Painted in the last century of the Byzantine Empire during the Ottoman invasions of northern Greece, this icon represents the youthful saint, suited in armor draped with a vivid red mantle, who was martyred over a millennia before in the 4th century during the beginning years of the Byzantine era. The exhibition catalogue, available in the museum gift shop, features this artwork on the cover. Heaven and Earth: Art of Byzantium from Greek Collections was organized by the Hellenic Ministry of Culture and Sports, Athens, with the collaboration of the Benaki Museum, Athens, and in association with the National Gallery of Art, Washington, and the J. Paul Getty Museum in Los Angeles. Major funding for Heaven and Earth: Art of Byzantium from Greek Collections has been provided by the Jaharis Family Foundation, Inc.

Additional support has been provided by the Stratis family, Charlotte Vern Olson, and Karen and Walter Alexander. The exhibition’s US tour is made possible through OPAP S.A.’s major funding. Financial support is also provided by the A. G. Leventis Foundation. The exhibition is supported by an indemnity from the Federal Council on the Arts and the Humanities. Special Events: Lectures: To celebrate the opening of Heaven and Earth: Art of Byzantium from Greek Collections, Jenny Albani, Hellenic Ministry of Culture and Sports, Greece, and Anastasia Drandaki, Benaki Museum, Athens, provide overviews of Byzantine culture and the exhibition. Reservations recommended. To register, please call 312-443-3680. September 27, 2014 2:00pm Fullerton Hall Free with museum admission; Reservations recommended Gallery Talk: Exhibition Overview Explore the array of Byzantine icons, silks, mosaics, and other stupendous loans in the exhibition Heaven and Earth: Art of Byzantium from Greek Collections. October 10, 2014 12:00pm Meet in Griffin Court Free with museum admission Lecture: Maniera Greca in the West, Maniera Latina in the Byzantine East – Piety, Politics, and Painting in the Thirteenth to Fifteenth Centuries In this lecture featuring artworks from Heaven and Earth: Art of Byzantium from Greek Collections, Anastasia Drandaki, Curator of the Byzantine and Post-Byzantine Collection, Benaki Museum, Athens and co-curator of the exhibition will focus on unexplored aspects of the dialogue between Byzantine and western European art, particularly Italian painting of the period. 4 Sponsored by the Classical Art Society October 23, 2014 6:00pm Fullerton Hall Free with museum admission Performance: “Fall of Constantinople” Cappella Romana. Join the renowned early music ensemble Cappella Romana and explore the musical legacy of the Byzantine empire with ‘The Fall of Constantinople.” Majestic ceremonies for the cathedral of Hagia Sophia, triumphant assertions of superiority by Westerners, and fervent prayers for the healing of political and religious divisions are followed by two poignant laments for the Fall of Constantinople. November 16, 2014 2:00pm Fullerton Hall This will be a ticketed event. Images: Icon of Christ Pantokrator, late 14th century. Byzantine; Thessaloniki.

MUSEUM HOURS Daily: 10:30–5:00 Thursdays until 8:00 Closed Thanksgiving, Christmas, and New Year’s days. Children under 14 always free Members always free The Art Institute of Chicago gratefully acknowledges the support of the Chicago Park District on behalf of the citizens of Chicago

Previous articleThe Pan Laconian Federation Board in NY
Next articleThe Lakonian Initiative raised a significant amount for the support the charities sponsored by the Metropolis of Lakonia/Sparta, Greece