The Hippocratic Cancer Research Foundation (HCRF) is very near and dear to Eleni Bousis’ heart, who happens to be a founding board member and the foundation’s chair.  The Hippocratic Cancer Research Foundation provides philanthropic support through its donors to fund interdisciplinary cutting-edge research at the Robert H. Lurie Comprehensive Cancer Center of Northwestern University.  The Lurie Cancer Center has a team of 300 researchers, clinicians and scientists.  Their “out of the box” thinking empowers them to come together as a united front and apply their expertise and knowledge towards finding a cure for cancer.   Not only are they able to apply their expertise to research but this research often translates into exceptional palliative care for their patients.  The Lurie Cancer Center and its physicians treat nearly 16,000 cancer patients each year and offer them full range prevention, early detection, treatment rehabilitation, and palliative care programs for all types of cancer.

The goal of the foundation is to support interdisciplinary research teams by enabling them to come together to discover and implement new treatments in order to conquer cancer and saves lives.  “I think that everybody without exception has been affected by cancer, and it’s by far the biggest health problem we have right now,” shared Leonidas Platanias, MD, PhD, Director, Robert H. Lurie Comprehensive Cancer Center of Northwestern University and Jesse, Sara, Andrew, Abigail, Benjamin, and Elizabeth Lurie Professor of Oncology. Dr. Platanias, also serves on the Scientific Advisory Board of HCRF, as its chair.  According to an interview with Northwestern Medicine Magazine, he strongly believes that “To me, research is only important if it can affect the patient. Otherwise, it has no meaning,” stressing how important it is to translate research into new therapies for patients, something that the Lurie Cancer Center is no stranger to.

The Hippocratic Cancer Research Foundation empowers the Robert H. Lurie Comprehensive Cancer Center team through its funding to focus on translational cancer research which will eventually accelerate and heighten the impact of scientific discoveries. HCRF enables innovative thinking that leads to instrumental care for cancer patients.  The Lurie Cancer Center is thankful for the HCRF support which ultimately leads to better outcomes for patients with cancer.  According to a National Cancer Institute analysis, cancer will strike 1 in 2 men and 1 in 3 women, hence the importance of enhancing and accelerating cancer research.

The Lurie Cancer Center has been dubbed #1 in Illinois and it ranks in the top 10 in the nation.  It is a founding member of the National Comprehensive Canceler Network, which is an alliance of 28 of the world’s leading cancer centers.  It is also a founding member of the Big Ten Cancer Research Consortium, a network of academic institutions working together on clinical trials.  “We are positioned among an elite group of top cancer centers in the country and poised for the next phase of growth and we look forward to expanding our capabilities and intensifying our efforts to defeat cancer as a disease,” said Leonidas Platanias, MD, Ph.D.

The driving force behind the many successes of the Hippocratic Cancer Research Foundation is its founding board member and chair, Eleni Bousis.  Eleni’s charisma, dedication, compassion and love for her faith, the elderly, destitute and ill, empower her to give back to society in a way that inspires others to do the same. She serves on a multitude of boards of various foundations that she believes are crucial to the well-being of society, including the Little City Foundation, Maryville Academy and the Leadership 100 Endowment Fund.   Her philanthropy expands outside of the Chicago area as she and her husband Dimitri have built and funded an orphanage in Kakamega Kenya, funded the restoration of Saint John the Baptist on the Jordan River and St. John’s in Jerusalem. She has worked tirelessly to make the world aware of the sex trafficking of children to the Mediterranean with Bonnie Miller (Ambassador Miller’s wife).  Eleni was appointed to the Illinois Human Rights Commission due to her experience in philanthropy and advocating for the disadvantaged and children.  Eleni has also helped run and fund the Greek American Rehabilitation and Care Centre in Wheeling, IL.  Needless to say, Eleni has been recognized as the Mother Theresa of today by several news organizations on a global level.

The HCRF was brought to life when Eleni lost a dear friend named Michael, a real estate developer, to non-Hodgkin’s lymphoma.  He was only 34-years old, but during his short life span, he was able to influence so many and do good for his community and around the world.

Every year, Eleni organizes the “The Wings to Cure” Gala in Chicago in order to raise philanthropic support for the Hippocratic Cancer Research Foundation.  The funds raised are donated to support the Robert H. Lurie Comprehensive Cancer Center’s translational and “out of the box” research enabling more cures to cancer.  This year’s gala will take place on Saturday, November 16th, at the AON Grand Ballroom at the Navy Pier in Chicago.  For more information or to donate, please visit https://www.cancer.northwestern.edu/about/donate-volunteer/hcrf/index.html 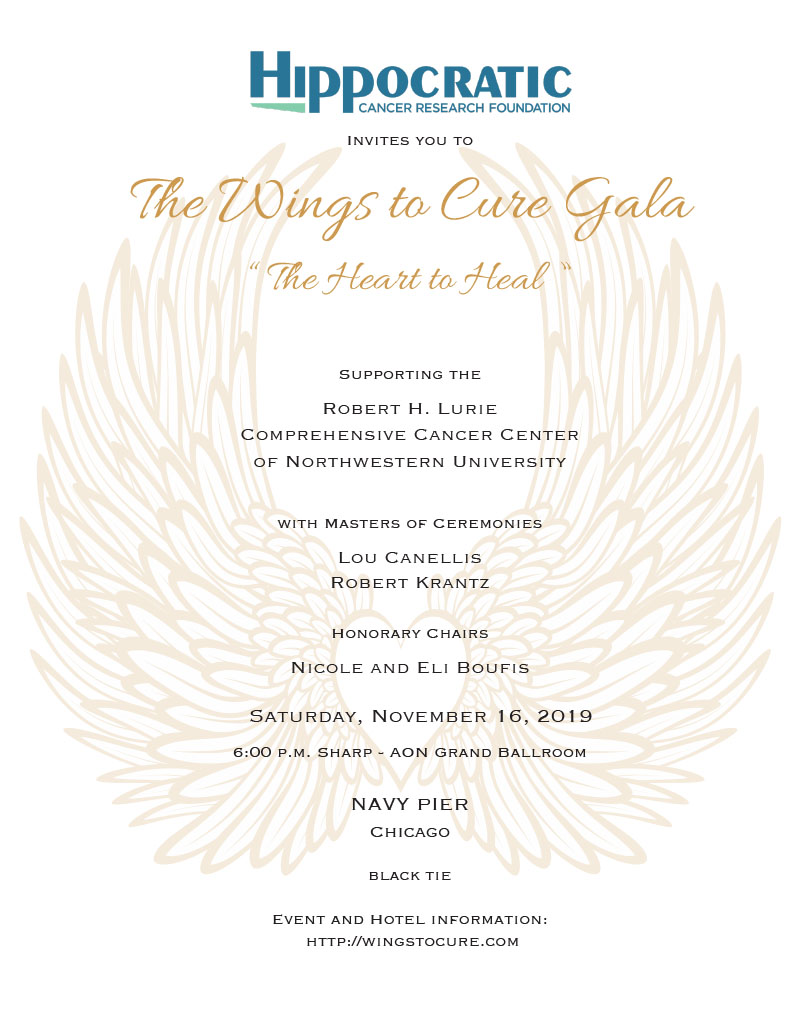