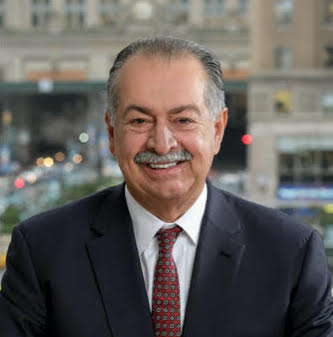 The new Digital Speakers Series of The Hellenic Initiative (THI) continued with a fascinating discussion about the post-Covid world with Andrew Liveris, Former Chairman & CEO of The Dow Chemical Company and founding Chairman of THI. Nicholas Logothetis, Co-Founder and Chairman of the Board of Concordia, fielded questions from around the world as the moderator, and THI President George Stamas offered greetings.

Liveris began by emphasizing the uncertainty that prevails and said “the stock market is gambling…that some sort of recovery is foreshadowed sooner rather than later,” but he warned “the best case scenario is not for quick recovery in 2021” but a ‘U’-shaped “recovery beginning 2024-25…if we return to pre-Covid behavior” – an important caveat. Liveris believes a fundamentally different economy will emerge. “All the projections of the use of digital just accelerated…Everyone is getting used to online. Companies are already announcing they will never have offices again.” But not all those jobs will go home. Many millions will disappear, he said, and noted most are “minimum wage jobs that are disappearing before our very eyes.”

Responding to Logothetis’ request for a positive note, Liveris waxed philosophical and practical about “Greece’s response to Covid,” about the Mitsotakis government’s actions and the citizens’ “rediscovery of the things we care about: a sense of community and protecting each other,” and being able to count on family, friends, community.

He also sees a brighter Greek economic future, citing companies shining in the IT sector, but for the now-crucial tourism industry, “this is a pivot moment” which could speak to its advantage” if Greece can shift away from mass quantity tourism. “People will want nutrition, safety, space. Tourism will pivot to a quality, not a quantity sector.”