TOMORROW! FILMS FROM THE BORDERS OF EUROPE present WELCOME (France, 2009) 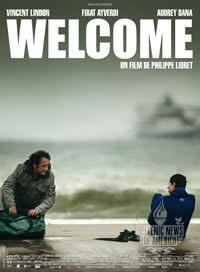 The A.S. Onassis Program in Hellenic Studies at New York University invites you to the screening of the film

THE REFUGEE CRISIS: FILMS FROM THE BORDERS OF EUROPE

17-year-old Bilal has spent the last three months travelling illegally across Europe, in an attempt to reunite with his girlfriend Mina who has moved with her family to England. The long journey is almost over when he finally reaches Calais, on the far northern coast of France; he can literally see his destination from across the Channel. But with all legal options exhausted, Bilal resolved that his only option is to learn to swim, and make the dangerous crossing himself. Bilal seeks the help of middle-aged swimming instructor Simon (Vincent Lindon), who is privately reeling from impending divorce from his socially-conscious wife Marion. In an effort to win her back, Simon impulsively – an uncharacteristically – risks everything by taking Bilal under his wing.