Tribute to Mikis Theodorakis as a member of Parliament

Sarbanes Statement on Anniversary of January 6th Attack on the U.S. Capitol

WASHINGTON, D.C. – Congressman John Sarbanes (D-Md.) today issued the following statement on the anniversary of the attack on the U.S. Capitol on January...
Read more
Cyprus

Throughout the history of the Cyprus problem, Turkish rhetoric and propaganda was based on a well-orchestrated distortion of the facts with the aim of...
Read more
Politics

After going virtual last year due to COVID-19, the Hermes Expo was back in action as it celebrated its 30th anniversary for the first...
Read more
Community 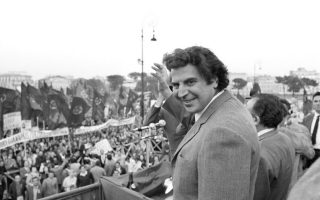 With an extensive tribute to Mikis Theodorakis, focusing on his activity and work as a Parliament Member, the 26th issue of the electronic magazine “Epi tou Peristiliou!” which was posted today on the website of the Greek Parliament.

In particular, the most important speeches of his, in different periods of time, of his 12-year total tenure in the seats of the Parliament, from 1964 to 1993, are recorded.

The most emblematic of these are the issues of education and art education, the right of workers to strike, on the occasion of the famous Article 4 of a 1983 law, and nuclear disarmament.

The first intervention of Mikis Theodorakis in the Parliament took place on September 1, 1964, during the discussion, in the then summer sections, of the bill of the Ministry of Education entitled “On the organization and administration of general education”. The Union of the Center was in the government with George Papandreou as prime minister, who also maintained the Ministry of Education with Loukis Akritas as deputy minister. The inspirer of the reform was the professor and later academic Evangelos Papanoutsos.

Mikis Theodorakis’s second speech in Parliament took place on September 23, 1964 on the same bill. In his speech, M. Theodorakis, after referring to the need for an essential and non-formalistic approach to ancient Greek culture through education, focused on the need for artistic education of Greek children, asking that Art History courses be introduced for teaching from the High School and of Music and Theatrical Education, a request that remains unfulfilled to this day.

At the intense session of the Plenary Session on June 1, 1983, on Article 4, which restricted the right to strike of DEKO employees, the speech of Mikis Theodorakis, then MP in NW Piraeus with the KKE, provoked a storm of reactions at the government headquarters. , as wanting to highlight the -according to him- politically hermaphroditic character of the bill, he characterized it as a “transvestite bill”.

In his speech, when asked by the KKE on December 14, 1983, about the installation of American missiles in Europe, Mikis Theodorakis, among other things, underlined that “the problem of world peace is the number one problem for all humanity and for our people. That is why we are facing colossal mobilizations in Europe, in the USA, but also in Greece “.