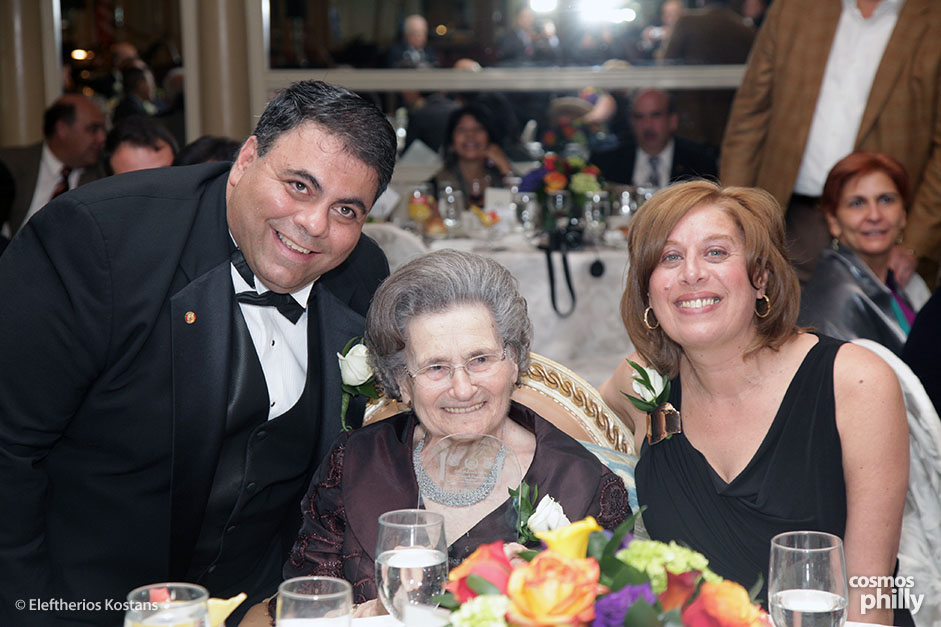 This annual event is held to celebrate and recognize the cancer research doctors who receive grant awards from the Foundation, whose primary goal is to help find a cure for cancer.

Past Chairman, Georgette Boulegeris, PDG gave a brief history of the Foundation.   She stated “that the first grant award of $5,000 was given to Fox Chase Cancer Center in 1990 and that the Foundation has awarded approximately $885,000 in grant awards over the past twenty-four years.”

Joining in on the celebration, the Foundation was honored to have the Daughters of Penelope Grand Vice President, Connie Pilallis representing Grand President Anna-Helene Grossomanides. On behalf of Grossomanides, she stated “I applaud your devotion and efforts over the past 25 years you have all truly made a difference to provide hope for cancer research.”

Also in attendance was Phil Frangos, Order of AHEPA Supreme President. Frangos stated “it has affected him and his family on a personal level and he truly understands the need for the Foundation.” He was honored to be able to attend the Gala and very proud of the AHEPA Family of District 5. As well, he commended the Foundation on their fundraising efforts and awarding of cancer research grants. He further stated “that District 5 is a shining example for what all AHEPA Families can achieve.”

Foundation Chairman, George G. Horiates, PDG said “we are here to recognize a project of the Fifth District AHEPA Family that was started over twenty-five years ago by way of a proposal, by our dearly beloved, Woody West, to form a fact finding committee to establish a Cancer Foundation.”

Horiates quoted from West’ original proposal which said “I am totally committed to seeing this project through to its inception, believing that it will provide an element, which has been missing from the Order for many years, namely a purpose, which we can all unite behind and be proud to be a part of. Such a project would be beneficial to cancer research and the Order of AHEPA, drawing all family members into one united group, for who of us has not been touched by the effect of cancer at least once”. West would later become the first chairman of the Foundation.

The Chairman further stated “the Fifth District AHEPA Family twenty-five plus year commitment that we celebrate tonight is a testament to all of our members, raising cancer research monies by the dollar, the quarter and by the penny, through bowl-a-thons, canister collections at our local restaurants and diners and from chapter and individual donations.”

Over twenty-four years the Foundation has given out $885,000 in research grants and will soon be approaching the million dollar mark through collective efforts. This is what makes The Fifth District AHEPA Cancer Research Foundation one of the greatest jewels in all of the AHEPA Family domain.

The Chairman was overjoyed to announce “this year we have raised over thirty thousand dollars in benefactor donations indeed we have broken a record. To all of our benefactors and cancer research doctors we say thank you and may our work continue to new heights, for the next twenty-five years and beyond.”

The highlight of the evening is the presentation of Research Grant Awards, which were presented by Chairman Horiates and Treasurer Andrew C. Zachariades, Supreme Secretary. This year three institutions that specialize in cancer research received a total of $40,000 in research grants. The Foundation has awarded over seventy-five research grants to various institutions for cancer research in the states of New Jersey, New York, Pennsylvania and Delaware.

This year’s recipients were Fox Chase Cancer Center located in Philadelphia, PA for their study on Preclinical studies on a new drug for the treatment of small cell lung cancer and advanced non-small cell lung cancer, accepting the grant award on behalf of Dr. Yanis Boumber was Dr. Alex Deneka and Dr. Alex Kudinov, they were elated to receive the $10,000 grant award.

The Rutgers Cancer Institute of New Jersey, New Brunswick, NJ received two separate grants. Both studies coincide with the final phase of a study on Triple Negative Breast Cancer which will improve the treatment of patients diagnosed with this type of cancer.

Dr. Kim M. Hirshfield received a $10,000 grant award for her study on, Identifying genomic markers in triple negative breast cancer that predict for chemosensitivity.  Dr. Hirshfield said “We can’t do what we do without your incredible support and generosity. Further, we hope that what we learn from this study will benefit all breast cancer patients. We are grateful to have this opportunity to not only help patients with breast cancer live, but to live well.”

The second $10,000 grant award was graciously accepted by Michelle Walker, Director of Development on behalf of Dr. Shridar Ganesan for his study on, Determining pathological complete response to neoadjuvant liposomal doxorubicin and carboplatin in the treatment of patients with triple negative breast cancer. Michelle Walker stated that “on behalf of Dr. Shridar Ganesan, we congratulate the AHEPA Fifth District Cancer Research Foundation on their incredible 25 years of supporting cancer research. Your commitment to current patients and those not yet diagnosed is inspiring.”

Principal Investigator, Dr. David C. Lyden, of Weill Medical College of Cornell University, New York and Co-investigator, Dr. Yibin Kang received a $10,000 grant award for their study on the Role of breast cancer and pediatric cancer exosomes in organotropic metastasis. Dr. Lyden thanked the Foundation for their many years of support he further stated “that this study will tell us why cancer spreads to specific organs, and identify the means of preventing this.”

The Foundation is privileged to collaborate with these amazing cancer research doctors and institutions. Some are a part of the select few who have received the honor of the Foundation’s prestigious Axios Award, which is presented to an individual or individuals whose humanitarian purposes and endeavors contribute to finding a cure for cancer, unselfishly and devoutly in the name of mankind. Dr. David C. Lyden is the 2009 Axios Award recipient and Dr. Yibin Kang the 2013 recipient. Previous doctors and Institutions include: 2011 Fox Chase Cancer Center, 2008 Dr. William Hait, 2007, Dr. Nicholas Romas, 2006, Dr. Maria Theodoulou.

The Foundation introduced the Hope (ElpiV) Society which is for special individuals who have donated over $20,000 to the Foundation. Antoinette Marousis-Zachariades, Vice Chairman stated “that the reason we call it the Hope Society is two-fold.” “First, from the generous donations, the Foundation has been able to give Hope in the form of cancer research grants to the doctors and institutions that the Foundation has supported these past 24 years.”

“Secondly, the society name is in honor of one of the Foundation’s longest sitting Board of Trustee members, Alice Kartikis, whose Greek name is Elpis, and when translated means Hope.“ Miss Alice has been on the Board since the early 1990’s. Her generosity over the past 18 years may not be known to all, as she is not one who looks for recognition for her donations as they come from the heart and in memory of her beloved husband, George Kartikis.

The Foundation looks forward to inducting new members into the Hope Society in the near future, hoping that all will be inspired by the act of kindness and generosity such as that of Miss Alice.

In March of 1989 armed with collection canisters thus inaugurated the humble beginnings of collecting donations to provide funding for cancer research. The Board of Trustees are all volunteers, dedicated to the Foundation to raise funds for research grants for the outstanding doctors and institutions that are committed to finding a cure for cancer.

The mission of the Foundation is to facilitate fundraising and to award grants to scientists and medical research institutions whose primary goal is to find a cure for cancer. The Fifth District AHEPA Cancer Research Foundation, Inc. is tax-exempt under 501 ( c ) (3) of the Internal Revenue Code.