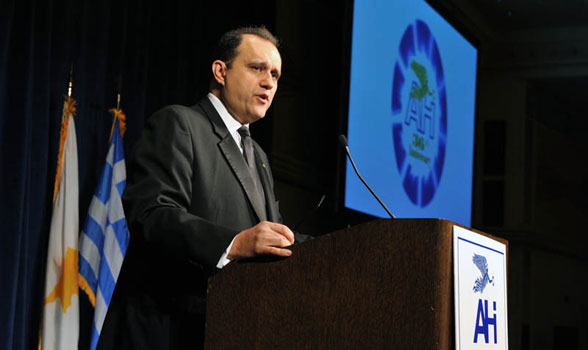 First, The Washington Times published Larigakis’ Letter to the Editor titled, “Turkey to Blame for Cyprus Division,” Sept. 4, 2014.  He wrote the letter in response to an August 22, 2014 rebuttal to a Victor Davis Hanson op-ed written by Mr. Ahmet Erdengiz.  Larigakis sets the record straight on Turkey’s illegal invasion of Cyprus on July 20, 1974, the myth of Turkish Cypriot “isolation,” and the defeat of the flawed Annan Plan in 2004.  He concludes by asserting that Turkish intransigence is at fault for the current stalemate of settlement talks, and not, as Mr. Erdengiz claims, the Greek Cypriots.

On Sept. 16, 2014, The Washington Post published in its hard copy edition President Larigakis’ editorial submission under the heading “Taking Exception” on its opinion page, granting it added weight.  The submission, titled “Greece deserves respect for holding to its word,”  called out Post Editorial Writer Charles Lane for taking a sarcastic swipe at Greece’s ability to meet NATO’s mandated minimum standard on defense spending in his Sept. 3, 2014 op-ed, “The U.S. needs to get serious about defense spending.”

Lane wrote, “In the run-up to this week’s North Atlantic Treaty Organization summit, much has been made of the fact that the United States is one of just a handful of the 28 member states that spends more than 2 percent of its gross domestic product on defense — along with Britain, Estonia and Greece, and the latter qualifies only because its GDP has collapsed even faster than its military budget.”

In his editorial submission, Larigakis called Lane’s characterization of Greece “an unnecessary sarcastic swipe” and cited several ways in which Greece has, and continues to be, a reliable NATO ally and vital to the projection of United States strategic interests in the region via NSA Souda Bay, Crete. He also states for the record Greece’s percentage of GDP spent on defense, which is nearly 2.3 percent.

The American Hellenic Institute is a non-profit Greek American think-tank and public policy center that works to strengthen relations between the United States and Greece and Cyprus, and within the Greek American community.