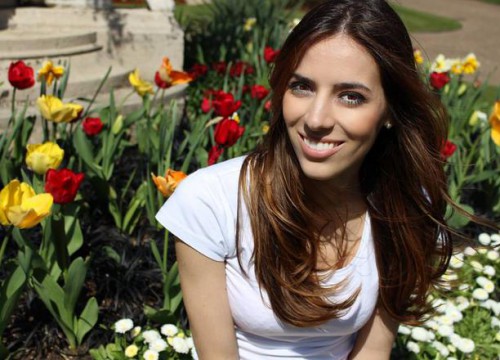 Eleni Antoniadou is the recipient of the Sciacca “Science 2016” International Award. That’s another yet award for the Greek scientist, who has repeatedly received recognition for her contribution to the development of life-saving therapies for artificial organ transplantation, including the NASA – ESA Outstanding Researcher Award for 2012. In 2013, she was named Woman of the Year at the 2013 British FDM Everywoman in Technology Awards, and in 2014 she was a laureate of the Cartier Women’s Initiative Award for her work in bioengineering. In 2015, she was named one of Forbes magazine’s 30 Under 30 in health care. “Eleni Antoniadou is chasing one of the holy grails of biotechnology, namely, creating organs in the laboratory that could be transplanted into sick patients”, says Forbes.

Antoniadou began her studies at the IT and Biomedical Applications Department of the University of Central Greece in Lamia. Her genuine interest in research and her passion for innovative technologies led her to study the development of artificial organs and acquire a masters degree in Nanotechnology and Regenerative Medicine at the University College of London (UCL). She is currently working on a doctoral degree in Bioengineering at the University of Illinois. “I am the only woman in my department and the only European as well,” she told Kathimerini. “The competition is intense, and I must admit that it took a bit of extra effort to be accepted as a Greek.”

While at UCL, Antoniadou and a classmate crafted an artificial trachea that was later used in the world’s first successful artificial organ transplant in the history of medicine on a 36-year-old late-stage tracheal cancer patient. This case proved the potential that regenerative medicine holds for future transplantation therapies.

In addition, she was selected from among 1,200 students to participate in a course at the NASA Ames Academy for Space Exploration, where she continues to work as a Researcher focused on studying the effects of changes in atmospheric pressure on the nervous systems of astronauts.

Despite her role at NASA, Antoniadou expresses a remarkably earthbound vision for the future. Her focus remains firmly on helping ease human pain which is also the main objective of the company she co-founded. Transplants Without Donors supplies transplant organs with no need for human donation: they are created artificially from stem cells. From a humanistic standpoint, the major aim of the project is to give an end to the human organ trafficking, a transnational organized crime, that is rising in third world countries and has become a lucrative facet of economic development by annihilating the need for real organs. “In the company… we have already succeeded in growing arteries, skin, nerves, tracheas, ears and noses. Our work is aimed at cancer patients or people who have been in accidents”, she says. “People think it sounds like science fiction, but this work has been going on in labs for years, now it’s time to take it into hospitals”.

Antoniadou is actively involved in humanitarian aid missions to Uganda, Peru and Costa Rica where she has served as a volunteer Group Leader with the Foundation for International Medical Relief of Children.  Based in Philadelphia, the organization sends qualified volunteer groups to perform operations or offer health care to children that have been victims of the illegal organ trade.“Looking back to all my experiences in life, being a volunteer is the most important achievement that I have ever done and by far the most rewarding. Where there might have been despair in the face of one person, to see that replaced with hope is a gift beyond words”.